Rare spotting with Cymre and Veluxia

I was wandering around doing my dailies early Tuesday morning (or rather, late Monday night I guess), and Cymre was on.  I said hi to her and asked her what she was up to, and she was fishing - she has caught 2 carp already!  I was impressed!  What I didn't know is that those damn carp are not cageable :(  Poops!  That seems a bit unfair since the Sewer rat is cageable.


Anyway, she came to the Isle for some wandering around and she said Prog was up.  I knew it was a rare but I didn't know what or where it was, so she had to lead me to it - I mean, literally hold my hand to get there because I am easily confused by mountains and caves on maps and can't figure out how to get to dots and targets on my map.  I didn't get much of a chance to get a picture, Cym engaged it but I got a small pic!
Then the Haywire Sunweaver Construct was up which Veluxia told me to come and look at and take a pic of, so I chased the damn thing up and down the beach trying to get a good shot.  Cym came to kill it as well. 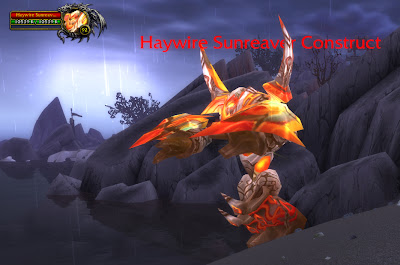 Then we killed the turtle, but I forgot to take a picture of it.  It kinda died slowly with 2 disc priests and a bear.  And then Cym said she'd had enough of rares, but Veluxia found Al'tabim for me and we killed that together.  It was nice valour! 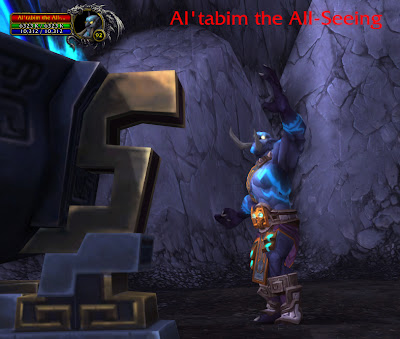 Poor rares.  Nobody will leave them alone!

Oh, and another cool thing today was that The Deadtalker Cipher was up, which meant me and Lushnek could complete our Know Your Role achievement.  Yay, another thing scratched off!