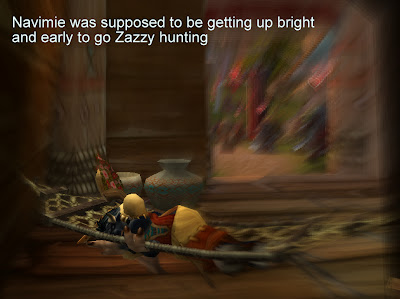 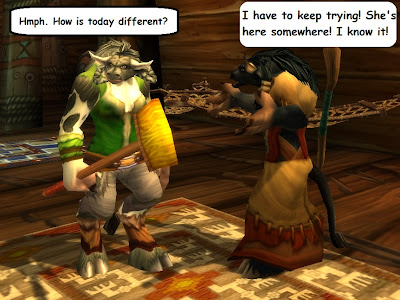 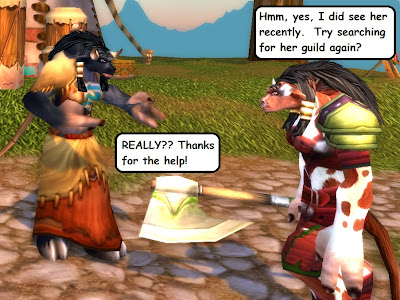 Zazzy is one well dressed chick.  She really loves to transmog and on her blog, Zazzy Mogs, she writes everything like a comic strip, making it not only something with pretty clothes, it's a fun read too!  She is such a frequent visitor to my blog (and she is very friendly to me on Twitter too - retweeting my stuff) that I thought I would try my hand at this comic thing as a tribute to her when I was trying to Navispam her.

Zazzy Mogs is one of two blogs written by Zazzy/Lorelei.  Zazzy Mogs tends to deal mostly with costumes, whereas her other blog, Pixel Lives of Lorelei, deals with all that other stuff (though today, it seems to have vanished!).  Each of her blogs has its own personality and Pixel Lives is a little more like my blog - bits of everything :)  Her latest post on Zazzymogs, she had done Matty's Movie transmog, and her Lord of the Rings outfits looked really cool.  I wanted to tell her that in person.

I was lucky to be able to track down one of her alts, Tiny, to take a picture with me!  Unfortunately, the bad thing was that it was one of those days where the kids were just being BAD early in the morning and there were lots of AFKs to mediate who-hit-who, taking someone to the toilet, or cleaning up spilt food on the floor.  And I also had to head out shortly so I was in a bit of a rush, and I had to go out in 10 minutes as well to get to the shops.

Zazzy knew I was looking for her - I had given her a heads up because I had asked one of her guildies about her - so she wasn't too surprised to see me though.  I only had a few minutes to grab a picture with her before I had to pack people up to go out. 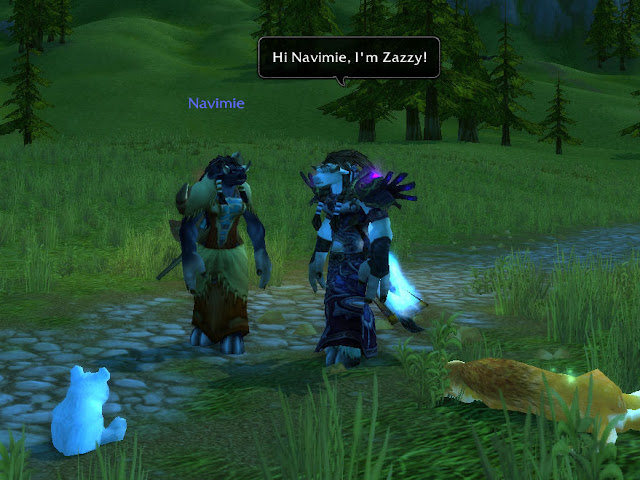 Zazzy kindly kept despatching all the fierce creatures that kept trying to waylay me.  I told her how I love her Zazzy comics and I chatted a little about her latest posts, and I kept apologising to her for having to leave so early.  Hopefully I can visit again and talk longer.  I wanted to see the Sea Pony she had been talking about so I did get a picture of that at least :)  So thank you Zazzy!   I hope one day I can catch you again.