Kallixta had a brilliant idea - he told me I should review those hard to get pets and compare them to see what they're like against the ones already in game.  So I thought I would start with my prized pet, the Mini Tyrael. 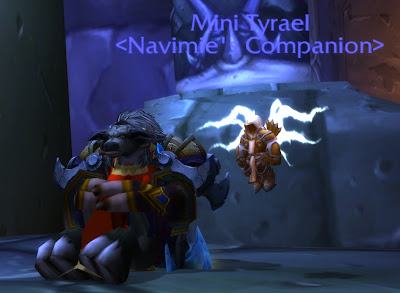 The Mini Tyrael is a gift for attending the 2008 Worldwide Invitational held in Paris.  It is rumoured that 8000 of these printed.  You can get them on Ebay (like I did) or try and win one in various competitions online.  He has some really cute idle animations, the best being him dancing with you if you /dance with him.  He also goes to sleep on his side, whilst flying. Nawwwwww cute!

Mini Tyrael is a humanoid class with all humanoid attacks, which are strong against Dragonkin and weak against Beasts.  And, in all honesty, I don't like pets which have attacks which are all strong against the same class.

I often team my Mini Tyrael up with my Dark Whelpling or Deathy because I use Call Darkness A LOT.  Which is part of the problem.  Tyrael can heal, but obviously won't heal much with Call Darkness and its attacks are strong only against dragons and kind of average against the others.

As for levelling - you find that most wild pets are beasts, so levelling against beasts is not particularly great for Mini Tyrael.  And there aren't that many dragons out there to battle against. 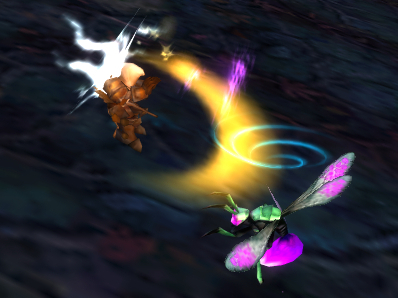 Here are his list of attacks (courtesy of Warcraft Pets): 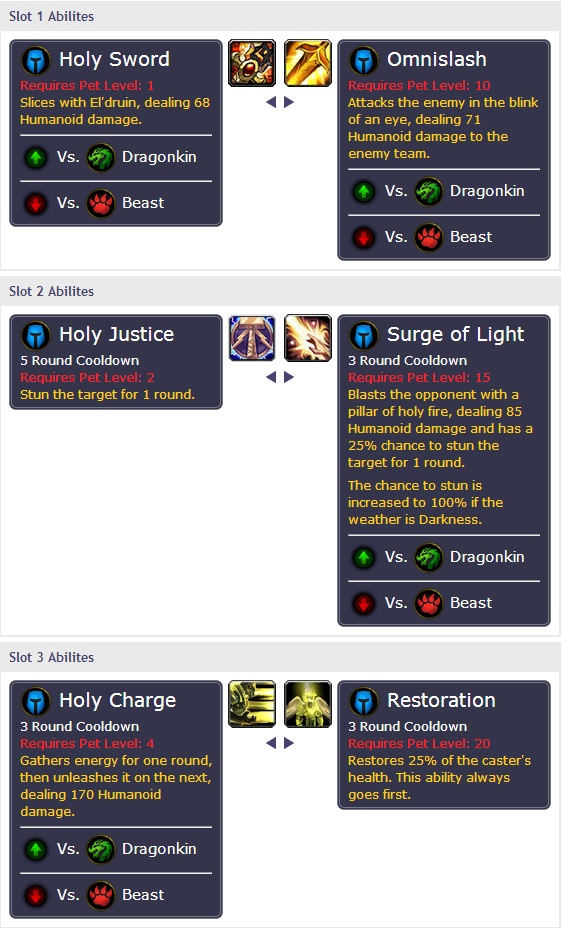 In Slot 1, you can choose from a single attack which does or a team attack which does a small amount of damage but useful if the primary target is doing some kind of avoidance ability.  I also like it if you end up fighting with a creature who uses Call Lightning.

Slot 2 abilities are both stuns.  I prefer Surge of Light because it does damage and because I tend to use Darkness it will stun anyway.  Lousy against critters, of course.

Slot 3 I tend to choose Holy Charge because with Darkness, Restoration is not a very useful spell.  Holy charge does a lot of damage - about 700 or so but is easily avoided because you can see it coming.

So my verdict?  It's a better pet for its looks than as a battle pet.  I don't find that it performs particularly well against the dragons in the pandarian tamers - it will kill them, but you can't do the Call Darkness - Surge of Light - Holy Charge move because Dragons rarely come as the final pet to fight, and once they get stunned, the computer swaps out for another pet.  But it is a beautiful pet to look at with an awesome model and a cute animation.

Do I regret buying it?  Not at all.  I love those wings.