I like looking at the people around me on the server.  You never know who may be interesting or have a story to tell!

When I was doing my daily rounds of pet battles with the Pandarian Elementals, I would often see the same people going from daily to daily.  Veluxia, was one of them.  I waved to her once and emoted good luck before I stepped into pet battle, and when I went to the next one, she would be there, and wave at me as well.  It was nice - we were different factions but we were both enjoying the same thing - pet battling - and doing it amicably.

I looked her up and wow she was the person with the most pets on the server!  And look who's right behind her only just - Cymre!  Whom we all know is a very avid pet battler and collector, and wrote about pet battles and pet collecting from the beta and into Mists of Pandaria, long before everyone else was getting into them (though admittedly, if you're in the beta you're already doing everything ahead of everyone else LOL)

Anyway, I asked Veluxia if she would mind if I took a picture with her.  She's dressed so nicely in her transmogged Sanctified Crimson Acolyte Robe, Pulsar gloves, Underworld Mantle and Mindfire Waistband. Ice Spear Sceptre looks great with it too. Very fashionable!  Draenei always look great - no wonder Draynee is a Draenei mog fanatic!  Ahem,but I digress. 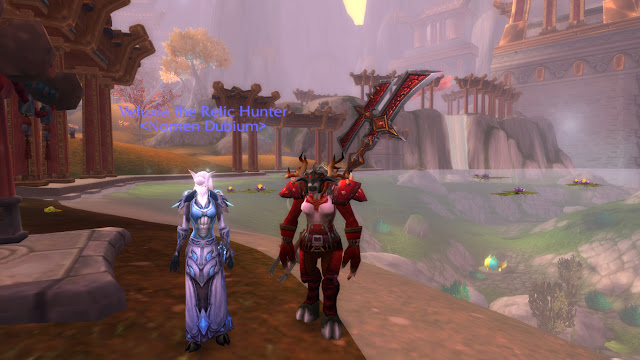 She brought out her favourite pet! 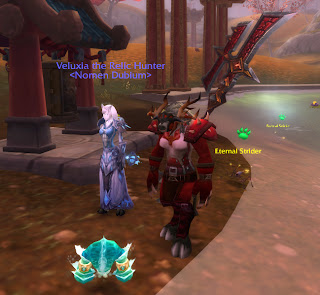 The funny part of this story was, I was flying over the Vale and I saw her battling below me, I flew down and frantically emoted her with /wave and /wait and I logged over to Alliance to ask if she would mind if I took her picture and then asked if she could bring out her favourite pet.  She must have thought I was crazy LOL!

Anyway, when I logged back to my toon, I had a battletag request from her - I have never looked but I didn't realise that you could just battletag someone from their name, and especially across factions.  When I accepted she laughed and said "There, much easier to talk now!"

So I asked her about pets, and she had difficulty choosing her favourite - she said she had so many!  And so I asked her my one burning question - what pet does she use against the Thundering Earth Spirit?

She told me that she uses her Emperor Crab, her Fluxfire Feline and whatever other pet she is levelling.  She does what Souglyy does - she levels through battling the pet tamers, which is a great way to level, because the level 25 tamers give your pet 3.4k or so depending on your pet's level and if you have your Safari hat on.

And she linked me her Emperor Crab.  Now I know why Ancient loved to use hers so much.  Look at that attack power!  It's a killer crab!  Veluxia is using the 4,14 breed of crab - with high attack power.  My one is the 6,16 breed with high health.

I am still struggling with 3 pets to survive let alone get one to level!  But I don't use her pet combination so I gave hers a try - Fluxfire Feline was great against that burrower - if you get it wound up during the battle with the oozeling as your last attack, when you go to the burrower your speed is faster than it and you can one shot it with another wind up.  Or if you can get supercharged beforehand, even better.

She told me her goal was to level EVERY pet to 75. And looking at her Battle Pet score for the server, she's on her way - whew!  Souglyy is up there too in the rankings at 6 and Cymre is there at number 10. 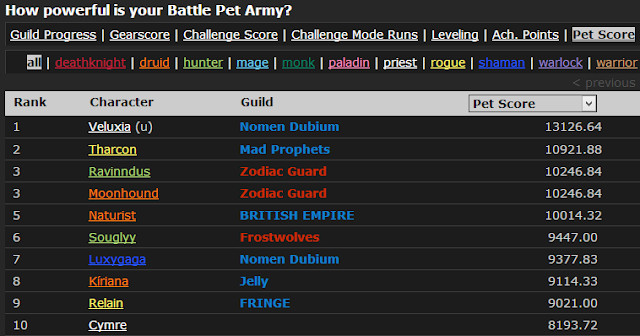 But look at the world rankings for high level... holy crap!

So,I should level my pets like the pros.  I think my levelling will go a lot faster now.  Thanks to Veluxia for letting me paparazzi her :)