You better not pout, I'm telling you why!

Naviclaus is coming to town!

Mists of Pandaria has been great for Winter Veil. The vanity/battle pet trade has opened up a whole new world of gift giving and I started early-ish because some of the pets I had acquired were things that people were lacking at that time.

I was very lucky when it came to getting pets to drop from those Pandarian Elemental tamers, so I looked through a lot of friends who were avid pet battlers to see who would like all the extras I had. I also had a few Silkworms from tailoring, and anyone who didn't have a Horde Enchanted lantern was going to get one. And 5.1 brought all those lovely raid boss drops which are sellable and tradeable so any extras of those became gifts. And, of course, Blizzard purposely put things on sale so I used those to prop up my pet gift inventory too. TCGs from someone I regularly buy things from (gosh that sounds terrible! I buy too much stuff!) also helped fill up my Gift sack.

I started on my own server.

I knew Cymre was missing a Pandaren Fire spirit, so I gave one to her - and I hopefully rubbed off some luck on her because not long after she got the Earth spirit as well!

Moogyver and Natanie (Mrs Moogyver) got matching L'il Ragnaros'.  Those gifts were actually quite funny when you look at the Twitter conversation

To which I then replied 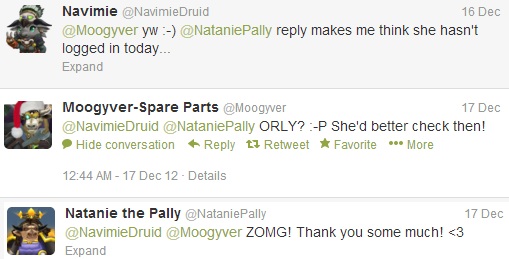 Then I had my to go bring some Winter Veil cheer to my lovely guildies, whose support, help and friendship are surely gifts without measure!

Lushnek got a Cinder Kitten, and lovely companion for Kitteh form.  Sevros got an Imperial Silkworm, because I wanted to show him tailoring does have fun stuff, look what he's missing out on! (Sev dumped tailoring for inscription a few expansions ago).  However, in return he gave me not only a Gilnean raven, but a Shore Crawler as well!  So I need to get him something a little more exciting than a worm!

Roshii and Souglyy both got Pink Puffers, a pet which I remember fondly because I got one for myself when the Sea Pony was being an ass and refusing to be fished up.  That left me with a Pandaren Fire spirit - who would really like that?  I chose Aza because he loves his fire stuff!  (And OMG he gave me his own  Anubisath Idol in return!!) Moo got a Moonkin Hatchling - it was as druid as I could get and cute to boot! What to get Tout... I gave him a Dun Morogh Cub (the one I had named Tout - why, I chose that I'll explain later) as it reminded him of his bear tanking.  For the lovely couple Balinar and Pel.. Pel loves all things pets so I got her a Moonkin Hatchling and sent it to her druid.  I knew Balinar would get stroppy with me if I bought him something because he can buy it himself, so I made him an enchanted Lantern instead.  For Faith and Ayelena, I bought them both a L'il Ragnaros, because Faith used to have the task of slow falling after exploding the fiery circle things, and Ayelena likes all things fire.

Now it was off to my other guilds!

The Shadow Rising crew have been so helpful and supportive and great company!  Especially that Arvash - what do you get the person who is #1 on the server for unique pets??  Luckily for me, Arvash was still missing a Pandaren Fire Spirit, so I gave him one, which brought him to 500 pets!  It seems every time I give one away, another drops!  For that other pet battler, Repgrind, I gave her a Pandaren water spirit, so she has one less to get for the daily (she's not up to them yet, but she will be soon)!

For the cute couple (heh) Slice and Lyss, I got them matching Pink Puffers.  I told Lyss a hint - Roshii and Souglyy had to go through the ENTIRE TCG loot set to figure out which code I got them - but I told Lyss Throne of Tides as a hint so they could find it.  Slice, who had been home all day pet battling hadn't even realised I had sent something but he found out soon enough when Lyss got home.  Those two lovelies gave me a Dun Morogh Cub in return for Winter Veil (so I kept theirs and named it OrangeLyss and gave away my old one).

So now, my Alliance guild!  Typhoon Andrew isn't much of a pet person, so I thought I'd spread some horde cheer and give him an Enchanted Lantern (which is the horde version of that pet).  I got Sal a L'il XT because he's noisy (and Sal is so chatty!) and she seemed to like her surprise :) I love it when people are happy!

As for Gen, whom I'm not sure likes pets, I got her a L'il Ragnaros because he's cool, and he's a raid boss, and I'm sure Rag has some nice memories for her :P

Now onto my blog friends...

I was actually planning to give Ancient an Earth Spirit but I didn't have a spare one yet.  And she was so miserable one day with her sinuses that I thought I would just give her a present straight away so I gave her an Untamed Hatchling, which she levelled in one day! (And she gave me her fox kit... that was... /wipes tear)

To Mataoka I gave her a Mini Mindslayer, because she's always easing my mind when I'm troubled. She gave me a Cinder Kitten in return - I already had one, but the proceeds going to the Hurricane Sandy Red Cross appeal was gift enough for me! 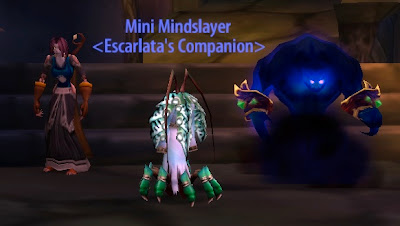 Effraeti, that die hard Alliance chick, I got her the horde Enchanting Lantern (which she took out and is on a guild video of hers somewhere!  I must find it!), which I also gave to Chris, Angelya and Kallixta as well.  Every Alliance person needs a little Horde don't you think?  Thunderspank, however, is not into pets, and is a die hard Hordie but doesn't have a Lantern so he got one too.

JD was new to Pandaria so I knew he wouldn't have an Imperial Silkworm so I snuck that over to him.

Kamalia and Euphyley both didn't have Pandaren monks so I thought they had to have one so they would remember the year that Mists of Pandaria was released.  Kam even came to visit me on my server to thank me in person!  We had a hilarious conversation as she couldn't find Dath'remar on the realm page and I had to quietly tell her that you had to click on the Oceanic tab at the bottom first...

Ratshag and Stubborn are both pet battlers, so I wanted them to give them both a Pandaren Spirit that they didn't have.  Ratshag accepted his Air Elemental graciously but Stubborn was living up to his name and refusing my gift so I sent it to Mrs Stubborn instead who was thrilled to receive her cute little Water Elemental spirit.

To my fellow story writers, Akabeko and Dahakha, I sent them both a cooking fire... hahaha, yes, that is L'il Ragnaros (who is awesome that he doubles as a cooking fire).

And Shoryl's earthy dwarf ended up with my Pandaren Earth Spirit that I got just the day before - I wonder if she knew how difficult that Elemental was for me to kill before I levelled my Nordrassil Wisp!  But I was happy that all of my extra pets had found loving homes - I think that giving really does bring you good luck, because every time I gave away an Elemental pet, another one would drop!  Except.. drama!  Poor thing, she was so excited she accidentally DELETED the mail in her excitement to open it.  She sent a ticket and the GMs told her the item would be sent back to me but it WASN'T so another ticket has been opened.  I told her not to worry too much, I could try and get another one (though maybe my luck may be running out) but I could imagine how distressed she was!  But even if she doesn't get it back, it was the thought that counts, and will remain, she said.  Awww :)

Finally my sack was empty.  All my gifts had been delivered.  And who needs exercise to give you endorphins??  Giving out presents gives you just as much of high.  No wonder Greatfather Winter looks so damn happy all the time :P
Email Post
Labels: bloggers pets winter veil