Wednesday and Thursday raiding - My first clear of MSV

I was worried that I would stuff something up on Elegon on Wednesday, but it turned out I was stressing out about nothing!

I was late to raid, and so when I logged in after putting the kids to bed, they were killing dogs.  A shame, as that boss has something I need still!  Anyway, I went off to pet battle and then Shab asked me to PvP so we started an AB but the guys were mowing through the fights so fast I had to /afk from the game so I could go raid - Bladewind offered to sit out for me.

So Elegon went smoothly, I don't think I stuffed up too much!  I even got an achievement! 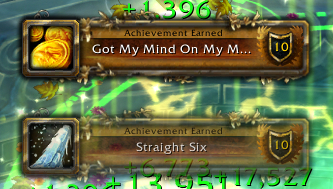 And I also managed to loot my 100k gold!

Will of the Emperor was a lot easier than I thought.  The biggest issue was tanks getting out of range and avoiding that cone attack they do, but it was actually relaxing.

On Thursday we tackled Heart of Fear, and having not seen the group do it last week, I was surprised at the setup they did it.  3 healers (really??) and the DPS was better than when we first killed it, I think.  One thing that was different - Vizier always starts on the Force and Verve platform first now.  It's actually to our advantage if he does 2 Force and Verves because during that phase could probably get his health down another 8-10 million.

Poor Raked.  He was like Balinar was in our first few attempts - he died a lot to Attenuation!  Mind controls were our usual problem - had to laugh at Aza making portals when MC'd.  Xar did his usual complaint of his seals getting mucked up, and of course, all the dotters would kill the MC'd people "by accident".  Bleh.  But we got it in the end, with 2 healing.  Fue seemed surprised we had been 2 healing it.

Then we did Blade Lord, and that seemed easier.  I was a bit hopeless with the cyclones and got hit by them a few times, and I was happy to use my Leap of Faith (Symbiosis from Priest) on Raked, coz he was having a bad time with the cyclones.  Usually he's quite good at them.

Anyway, that was a decent 2 nights of raiding.  Christmas is coming up so there won't be much raiding next week.  Now, does it sound bad if I want to come home from my parent's place so I can raid earlier?? :P