The Tale of the little Fox Kit 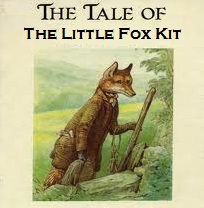 The little fox kit could not read, nor could he know the stories of other foxes in the world, but all he knew was that his world was changed, that fateful day he was learning to dig in the grasslands of the contested Tol Barad Peninsula.  The area was often full of warring humanoids who would fight and slaughter each other as they swept like a plague through the spiders in the Darkwood, or through the foul smelling undead of the Forgotten Hill.   He had learned from his mother long ago, to hide when he heard the sound of human horses, weapons and the clinking of mail armour.

They had seen many of his aunts and uncles, cousins, killed by these humanoids who had come to their peninsula, hunting riches, glory and fame.

"There are many of them," his mother had said.  "And they are all looking for one thing."
"What is that, mother?" asked the little fox kit.
"They are looking for YOU, little one."
"Me?  But why?"
"Because you are a treasure, a rarity.  Humans always prize and covet things which are rare."
The little fox kit was frightened.  "I don't want to die, mother,"
His mother hushed him, and licked his head affectionately.  "You will not die, my dear one.  For that is not your fate."

But death felt like his fate that day.  A black shadow, out in broad daylight, descended upon his dam.  His mother snarled and bit at the black creature, who was every bit as fast as her attacker.  She fought with all her strength, though she knew she was outmatched.  As the black beast delivered a killing blow to his mother's throat, and she fell, lifeless to the ground, the fox kit looked up into the eyes of his would be killer, her eyes blazing with bloodlust and the heat of battle.  But as soon as the panther laid eyes on him, cowering behind his mother's still body, her expression changed from fearsome to excitement and wonder.  As he stared into her eyes, the fierceness in them faded, and was replaced by something he had seen in his mother's own eyes.  The look of a parent looking down at a child.  And his fear subsided, and it was with mixed wariness and curiosity, he stared into the glowing gaze of the Kaldorei female who gently picked him up, and told him that she would look after him.

Catwynn could not believe her luck.  At last, a Baradin Fox Kit!  She had killed hundreds, maybe thousands of foxes in the Peninsula, looking for one of these elusive creatures, and here at last she beheld one.  As she lifted the frightened youngling in her cool, pale hands, she spoke to him, stroking him, and his trembling subsided as he listened to her musical lilted voice.  Catwynn took her prize and headed back to the mainland.

Such adventures she took him on!  He saw the snows of Storm Peaks, and the deserts of Uldum.  He panted in the heat of Mount Hyjal and swam in the seas of Vashj'ir.  But he was sad.  Though the elf was kind, she smelled of stars and moons and magic, a tangy metallic scent, and he missed the aroma of freshly dug dirt and grass in the summer.  The Night Elf could sense that he wasn't happy, and though she took him to the far south of the world, a land of cloud serpents and stone lions, wonders like he had never seen, she would still see him at night, gazing at the moon, thoughts of a land and a home far, far away.  The Night Elf knew what she should do, but she could not bring herself to do it.  She had searched high and low for a little fox kit, had the blood of thousands of Baradin foxes on her hands, but the initial exultation of finding one had dwindled into a regret.

A year and half had passed, and one day, the Elf summoned him and he could smell wistfullness and sadness in her countenance. He looked at her, his head cocked to one side, questioningly.

"Little fox, I know you haven't been happy here.  And I'm sorry, but I cannot return you to your home, but I have a friend, a very good friend, that would love you like I do.  She can help bring out the best in you, and I am going to pass you over into her care."

Passed around?  Like a piece of chattel?  The fox kit's shackles raised with a little growl.  He felt helpless, shackled to the misfortune of his fate.

The Night Elf went to the Valley of the Four Winds, and waited.  The fox kit was beside her and he looked around curiously at the passers by.  The sweaty iron smell of orc filled his nostrils, mixed with the smell of cooked food and beer that heralded a Pandaren.  But another, familiar scent caught him.  The little fox closed his eyes and inhaled the scent of summer grass and ploughed earth.  And for the first time, in a long time, he felt like he was at home.  He looked up and found a Tauren standing beside the Night Elf, her green eyes taking him in with interest.

The Night Elf spoke to the Tauren, in words that the fox kit could not understand.  And he was confused as the Tauren knelt down to rub his ears, as the Night Elf stood and backed away.  He turned and looked at the Night Elf, an unspoken question in his eyes, which she answered with a wave and a look of regret mixed with happiness.

The Tauren bowed deeply to the Night Elf.  "This is a gift beyond measure, Catwynn," she said in her low voice.  "I don't know what to say."

"Take good care of him, Navimie," said Catwynn as she looked at the Fox Kit she had raised, who had been with her for so long.  He was her first, and as yet, her only, but she would find another.

"I will.  I promise."  Tears gathered in Navimie's eyes, as she realised how much this gift meant. 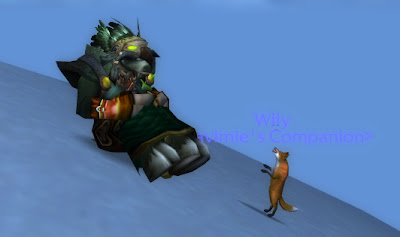 And the Tauren named the fox kit Wily, for his cunning, and his speed, and for the amazing gift of generosity that her friend Catwynn had bestowed upon her.

This story is for Tome of the Ancient, who gave to me her very own Fox Kit, a pet that she farmed for hours for and tirelessly.  I nearly cried when I found him in my mailbox, because I remember her telling me how long it took for her to get him (in the days before you could buy him with tokens).  Thank you, Ancient, for your amazing generosity, and that you consider me that good a friend you would give such a grand gift to me.