Ratshag is one of those people that for a long time, I'd never spoken to, but I knew about.  He was a long time blogger, writing over at Need More Rage,  and though I was never an avid reader of his blog, I had popped over once or twice to look at a post which I thought was particularly moving.  Most of the time he writes bits and bots about everything, from stories to a bit of RP, achievements, and basically all fun things in game.

He decided to quit writing at Need More Rage in August this year, and I particularly liked one thing he wrote in his last post, which is just the soppy person in me I suppose:

/sighs dreamily.  Anyway, I thought that was one of the coolest things I'd read for ages.  Sad for the blogging community to lose such a fun voice, but he still played WoW, he said so he's not totally gone.

Turns out Ratshag came to a few LBR with JD and one of my blogging heroes, Repgrind, was totally starstruck by that old Ratshag.  In fact she was so blinded by his starriness that she didn't see anyone else...


(I apologize for not really knowing who some of the others were, I was kinda starstruck by Ratshag’s presence. Sorries! >.< )

So one day, Iwith Cross Realm Zones, I was wondering if anyone needed a pet on twitter, and I got a tweet from Ratshag.  I was both stunned, and starstruck and... what do I say to the famous one himself?  I just played it cool, tried not to act like too much of an idiot, and chatted back and we swapped battletags so I could help him get pets since he has alts galore.  CRZ is cool sometimes.

It turned out one of the only things he needed was a Minfernal, and you know how hard they are to find.  I rarely go that way but when Ratters was on, I would fly by and have a look just in case.  He seemed to be on a lot!  He had an arctic fox kit, and a scourged whelpling, so he didn't need those when I found spares.

So when 5.1 hit, the only person online when I found some extra nexus whelplings was Ratshag, and that was the only time he needed something.  And I met him for the first time then.

One day, I thought I would get on and see if I could see navispam Narci or say hi to StoppableForce and Rades and only one person was online in their guild.  I whispered that person but he was AFK.  I waited a bit then logged back to my server.

Ratshag whispered me when I got on Navimie, "Were you trying to visit someone in TTGF?"  How did he know that?  Oh of course, he can see me on real ID.  I went to see what toon he was on and... wouldn't you know it, he was on the toon that I had whispered who didn't reply me.

"Hey, that was you?  Why didn't you say something?"

"I was AFK.  Getting ready for work."

I had a good old giggle that I had whispered a toon of someone I had already on battletag, not realising it was them.  Come on, when one of your battletag friends gets on, do you really look at what toon they're on?

He switched to the toon I'm more familiar with, not that he has a main, as such, and I wandered over to take a pic and hang out for a few minutes before he had to go to work.  He pulled out a few of his favourite pets, but my daughter's favourite pet is the sunflower, because she likes the game Plants vs Zombies.  So I put this pic here for her so she can point and it and tell me how wonderful it is. 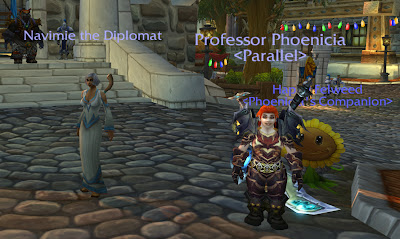 One funny thing too.  I was used to the style that Ratshag writes his blog but when I chat to him he doesn't talk like that.  In fact, he is super polite, though I suspect it's because he doesn't know me well enough to act like he does on his old blog.  Unfortunately for him, because I also like pets, I spend most of my time talking and pestering him with pet talk.  In fact, a lot of my friends will find that my chatter is mostly about pets.... (don't think I can see those yawns!)

Ratshag is writing again about World of Warcraft, this time on a pet battling blog, Press 5 to capture.  It's different from his old blog.  This one is more of an info hub rather than a creative outlet and Ratshag's news.  He tells us little tips, which pets are good against what, changes that have come with hotfixes and patches which have all been really useful.  The burning question now that I have is... why does he not use capital letters?  The whole blog is written in lower case.  I must ask him that when I see him online next.