Navimie and the Monkey's Paw

Navimie gently fingered the Mogu Coin - a currency used during the reign of mogu emperor Wai.  The coin showed him in all his snarling glory, with the reverse of the coin showing the changing of Mogu dynasties, a bloody process wherein the previous regime must be overpowered and executed.  In many ways, ancient Mogu government was a meritocracy, based on brutal strength and terrible cunning.  Navimie was glad that those times were long past.  She carefully packed it into a small box and added it to her sack of boxed archaeology artifacts she had found in her time in Pandaria.


Shifting to flight form, she headed for Mogu'shan Palace, where Brann Bronzebeard could be found.  He would definitely be interested in all of these items she had discovered. 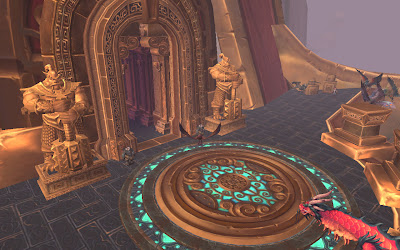 As the majestic building loomed in view, she went to wave to Mishi, the red serpent, then mentally berated herself as she had forgotten she was in flight form.  The waving movement of her wing had turned her graceful descent into a clumsy rustle of feathers more akin to a bomb dropping, and she landed with an awkward thump onto the hard floor, as she shifted into Tauren form.  Embarrassed, she brushed herself off, and quickly checked her sack and noted with relief that the contents were intact.  She glanced over at Brann who beamed at her with a broad smile. 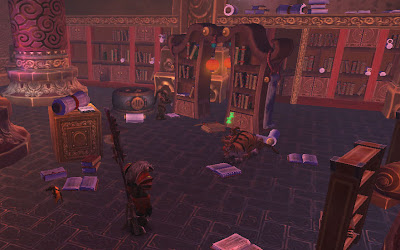 
"Hail, Bran," said Navimie, smiling shyly at the great adventurer.   Though she was almost double his height, his presence made her feel small - his fame always made her a little starstruck. 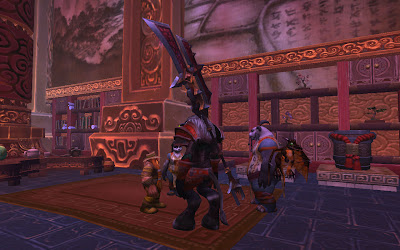 "I found some things that you might like, Brann," she said, as she opened her sack and began unloading boxes.  Brann knelt down and started to open them.

"Magnificent!  Look a' this Terracotta Arm! Navimie, it's darn near pristine!" Brann exclaimed as he looked at one of her finds.  Navimie grinned.  The deep burr in his accent made him attractive and rather manly for a small hariy humanoid.   "Aye, nary a scratch on this beauty, I've go' the perfect spot fer ye ta put it..."  Brann cleared some scrolls off one of the carved wooden tables and placed the Terracotta Arm on it, and stood back to admire it.

Master Liu hurried over to examine the piece.  "Navimie, did you know, when the Mogu had exhausted their options for enslaved mortal warriors, they turned their attention to creating armies of animated constructs to do their fighting for them."

"I see quite a few around still," said Navimie.  She thought of the countless statues she had destroyed for the Golden Lotus.

"Because these terracotta warriors would sometimes sit dormant for centuries, it's hard to pinpoint exactly when this one was constructed or used. However, scoring at the base of the severed arm indicates that it was felled in combat."

"I'm 'appy ter take these all off yer 'ands, Navimie," said Brann, as he looked at the huge collection of artifacts around him.  "Would yer like some o' these 'ere crates o' Dwarven Archaeology fragments?  I've go' plenty lying around tha' I can give ye."

"Do you have any crates of Tol'vir Archaeology fragments?" asked Navimie hopefully.

"Yer in luck, Navimie," replied Brann.  "I have 30 crates over there ye can 'ave for all these items."


Navimie's heart leapt in excitement.  "Oh, thank you, thank you, Brann!"  She hugged herself in glee as she ran towards the crates.

Brann laughed.  "Ye'll be doin' me the favour, Navimie, gettin' rid o' all that junk!" he said as he turned back to the treasures she had given him.

There was nobody else around, and Navimie opened the crates one by one, and was amazed to find some Tol'vir Hieroglyphics inside them amongst the fragments.  Creating an archaeology artifact was a bit like a jigsaw, finding all the pieces to fit together.  These pieces were all from the same dig, and she was happy that she would be able to restore a whole item.


Navimie's hands were trembling as she looked at the shrivelled paw before her.  There were only a few fragments missing, possibly lost with time.  The beauty of Tol'vir Hieroglyphics is that when the correct spell was cast, they could fill in the last pieces and complete a Tol'vir artifact.  Navimie put 3 Hieroglyphics over the 3 holes in the item, and cast the spell.  The artifact glowed whilst she channeled, and when she finished the spell, a muted glow lingered for another minute before it faded away.  Her heart was pounding as she looked at the rare archaeology item she had created.

A legend among the tol'vir told of a wicked djinn whom the Ramkahen sought to destroy. In an attempt to prevent his own death, the djinn tried to transfer his spirit into the body of a monkey. He was slain right in the middle of the transference, and only a fraction of his essence had moved over - only enough to possess the monkey's paw.

Navimie was sure this was the monkey's paw.  And if that was the case, that meant that there was a spirit inside this paw....

Which was confirmed as the monkey paw's fingers began to flex.  Navimie jumped back with a startled moo, which brought Brann and Master Liu running over.

"There was a wee Crawling Claw in that crate?" exclaimed Brann in astonishment.

"Do you want it back?" asked Navimie, trying to keep the disappointment out of her voice.

"It should be kept here to be studied and preserved," said Master Liu, as he bent down to pick up the artifact.  He jumped back in surprise as the claw slashed at him, and Master Liu yelped, cradling his paw from the deep scratch the claw had left in him.

Master Liu frowned.  "It has a feeling of chill in the wound."

Navimie cast a lifebloom and a rejuvenation, and the injury began to knit and heal, the warm glow of her innane nature healing gifts purging the wound and forcing the tissues to knit.  Master Liu bowed in thanks.

The claw immediately scrambled across the floor towards Navimie's boots, and before she could step back, the claw had crawled onto her boot.  She reached for a scroll to swat it off, but Brann stayed her hand.

Navimie stood like as still as a statue as the claw climbed up her leg and her body.  It was ticklish, yet she was also a little fearful that the little bugger would scratch her and leave undead poisons in her body.  Not that she was too concerned, as her healing skills would easily heal through any damage as well as purge any poisons.

The claw reached her shoulder and settled there, flexing slightly, like a spider.

"I think the claw has accepted you as its master.  It would be foolhardy to forcibly remove it to store and study," said Master Liu.

"A shame," said Brann.  "It woulda looked great in the museum."

Navimie smiled as she tickled the claw with one finger.  She had a new companion, and she could see that they had plenty of adventures ahead.

"Hello, Nicky," she whispered to the paw, thinking the name of her good friend would suit it well.  "I think you and I should go show some of these Golden Civet's what you can do."

The paw quivered in what she assumed was excitement.  Yes, she thought, we will do very well! 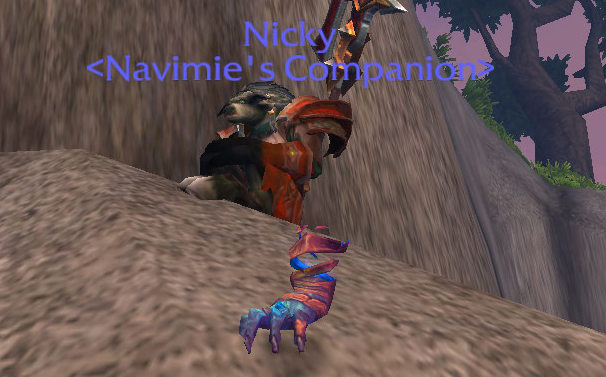