It wasn't a good start to the night.  Slurs had a lousy day at work and was in no mood to raid.  Priestietute, being the dutiful girlfriend that she is, spent the evening with him.  So that left us with 2 people short.

The other group was already saved to MSV so it looks like completing that was out of the question.  A bit of a shame really!  So much yummy gear to be had...  so we decided to go to Heart of Fear and bash our heads on Vizier for a bit.  We got Aza and Souglyy in to replace Priestietute and Slurs and off we went.

We got some good attempts, but it was always those damned mind controls which were annoying as hell!  But finally, on the 8th attempt (or so it felt like) we managed to pull it together and we got it down.  It was a huge relief!  I was thrilled to bits, and Souglyy got a neck and there was some shaman stuff which we DE'd. 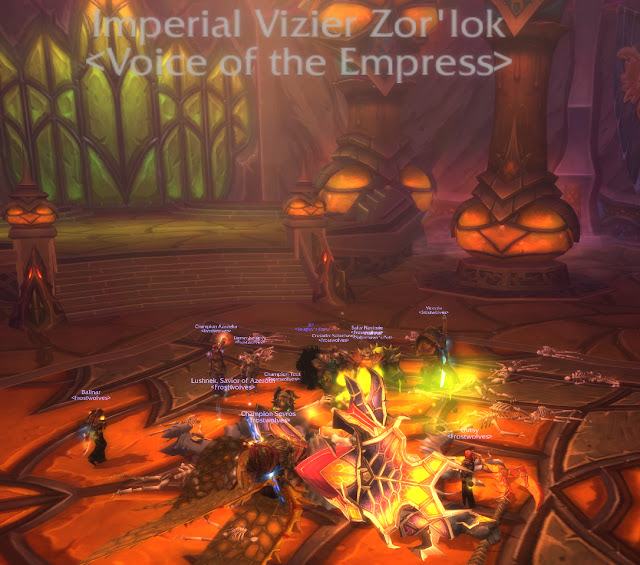 One of the things I found hardest during the night was to get my feasts to cross like this picture.  I wasn't able to reproduce that feat.  Sev told me it was all about the angle. 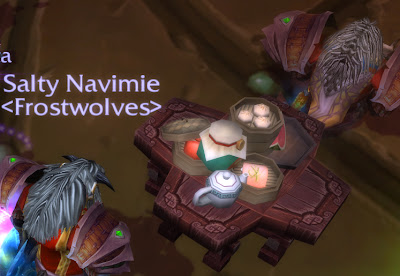 Some of the mind controls were hilarious.  Balinar always gets his seals changed and all his CD used when he gets mind controlled.  Aza was laughing one time because one mind control he put down a portal.  However, the computer must have heard him laughing because the next MC he summoned his pet, soul linked it and sacrificed it (I could be wrong).  One particularly bad MC, Moopie and Aza turned on me and beat me to death in just under 2 seconds.  I couldn't even hit deterrence (I had symbiosed Sabrehawk to try and get some survivability happening during MCs).  I remember reading out the Moopie hits Navimie for 50k, 50k, 50k, Azadelta casts chaos bolt on Navimie for 208k... bastards.

We played with the second boss a little bit but we weren't really serious.  Tomorrow, is the start of the one raid team over December initiative.  Which means we will always be raiding but we'll have a lot benched.  I guess that means that those who want to take a bit of a break can do so now.  I wonder who will be left to raid.
Email Post
Labels: Heart of Fear Raiding