I know I should be levelling but...

I'm an idiot.  I spent all Thursday up pet battling instead of sleeping, though in honest I couldn't sleep, so if I had tried to sleep, which I DID try, I would have been wasting my time when I could have been levelling! 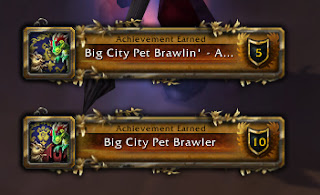 Ironforge and Stormwind are much easier to get into to pet battle than I thought.  Stormwind I did it outside near the edge of the lake where there are no guards but still within the city, and with Ironforge you can fly in (even though they still shoot you but it's pretty easy to get away and hide).  The hardest city is Exodar I found!

Woo I got a moccasin that made my 10th rare. 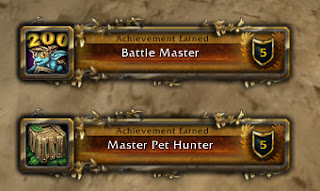 
I managed to get my Tiny Twister and Tiny Bog Beast yay!  I partied up with Ancient to show her some spirit crabs - I even managed to get a rare one! I even dragged Arv cross realm to get a Tiny bog Beast!  I also got a Black War Ram from the mountains in Loch Modan, so that was great.

This weekend I won't have much time to play, but... there is always time for a pet battle or two.