The sound of waves lapping at the sands, and the scuttle of Darkmoon Tide crawlers as they clattered across the beach into the welcoming water was all that Navimie could hear as she approached the cave.  There were no dead bodies, no indication that the rumoured Darkmoon rabbit was nearby.

She had heard a lot about this rabbit.  It had not been seen before on the island, but this week, when the Darkmoon Faire portals were opened, there had been whispers and reports of sightings, and even killings of the rabbit.  Elusive and shy, the rabbit was placid enough when left alone, but was a ferocious beast when provoked to attack.

With Frostwolves' recent defeat of Deathwing, there were no more raiding parties into Dragon Soul for the rest of the week.  Navimie sat down on the sand and waited, yawning.  What would she do if she saw the rabbit?  She wouldn't be stupid enough to attack it - it wasn't even her way.  Navimie never liked to kill rare spawns, she loved to look at them and appreciate them because that was what made them so special, so rare.

Restlessly, she got up and walked into the cave, looking for a hiding hole that the rabbit would emerge from.  She could see none.  Where did the rabbit go?  The faintly glowing mushrooms trembled, as if shivering, shedding small clouds of phospheresent spores that made the fungi glow dimly like lamps.  Watching them shudder made Navimie herself shiver, as the cold of the cave seeped into her pelt, and she quickly went back to sit against a rock that was still faintly warm from being baked in the sun for the whole day.  The warmth of the rock against her back combined with the sound of the waves had a somnolent effect, and before long she had fallen asleep.

Ayelena eyes snapped open at the first crack of dawn, and she rose from her bed, stretching langorously.  She stopped suddenly, as she remembered what she was going to do - have a look for the Darkmoon rabbit.  Her fingers danced an intricate pattern as she rapidly spoke the spell of summoning and Azgorod, her terrorguard appeared at her side.  She headed quickly to the magical portals that would take her and her demon to the Darkmoon Island.

Rays of light poured over the beach, and Ayelena was surprised to see a female tauren sitting like a sentry a good ten paces back from the mouth of the cave.  As she approached she recognised her good friend Navimie, who had obviously slept in front of the cave all night.  Sand covered her clothes, and there was even a crab burrowing around her hooves.  Even in sleep she clutched her staff tightly in one hand.

A movement in the cave caught Ayelena's eye, and her heart started to race as she saw glimpses of white fur.  The rabbit!  Ayelena watched as it loped casually around the cave, stopping every now and then to scratch itself, with no sign of fear in its jet black eyes.  Her terrorguard took a step towards the creature but Ayelena held our her hand in restraint.  She had heard that it would take 40 people to kill this creature, and that the creature had huge sharp teeth that could gnaw through an orc's neck in seconds. 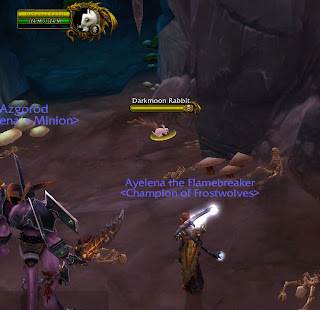 Ayelena reached down to shake Navimie awake, and was nearly clubbed as Navimie swung hard with her staff, narrowly missing her head by inches.  She grunted as she settled again back into sleep.  Ayelena was surprised, and irritated that her friend would be so vicious, when she noticed that Navimie was wearing her guardian armour.   No doubt the spirit and strength of the bear was flowing in Navimie's veins right now, which would probably explain her aggressive actions. Ayelena was tempted to step back 20 yards and throw a corruption on Navimie - that would wake her up quick smart.  But the magic around the Darkmoon island prohibited damaging spells from being cast upon another person.  And besides, everyone knew you should let sleeping bears lie.

A large party of Alliance approached, and Ayelena crouched down on the ground near Navimie, making sure she was out of reach of Navimie's forehand swing, but close enough to assist her guildmate should the Alliance wish to club her tauren friend whilst she slept.  They saw the rabbit and excitedly started speaking in common.  More Alliance arrived and Ayelena could see that they were getting ready to battle the innocuous looking bundle of fluff.

Ayelena could hardly believe that 40 people could fit inside that little cave, but they could.  And then the screams began.  The sounds of battle were so loud, and the cries so ferocious, Ayelena could not believe Navimie could sleep through it.  However, she had to leave, as she had other errands to run, and could not stay to the conclusion of the battle.  She wrote a small note and left it near Navimie to let her know what had happened and departed.

Some time later, Navimie yawned, and blinked at the bright sunlight.  Great footsteps of the Earthmother, what time was it!!!  As she gathered her energy, she realised that she was still in Guardian mode, the strength and stamina of the bear strong within her, filling her with energy and a hint of rage.  She shook her head in disgust as she focussed her mind and tapped into her focus of nature's energy, allowing the warmth and healing power of nature to fill her.  She should know better than to sleep with Ursoc's power within her, as bears slept heavily and were difficult to rouse.  She saw a note on the ground beneath her elbow, and she picked it up and unfolded it as she walked towards the Darkmoon Cave.

As she entered, and her eyes adjusted to the darkened surrourdings after the blazing light from oustide, she stared in amazement at the bones that littered the ground. 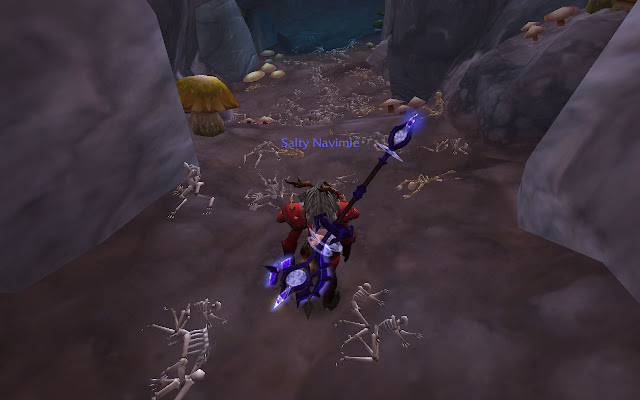 "Oh my god, I missed it!" she cried.  She unfolded the note to read as she stamped her hoof in petulant disgust.

Hi Navi, it's Ayelena.  The Darkmoon rabbit was up...

"Oh, why didn't you wake me silly warlock!" cried Navimie.

And I tried to wake you but you nearly took my head off with your staff.
I didn't want to risk being bitten by you in bear form when you woke.

"Oh... WHY DID I SLEEP IN GUARDIAN SPECIALIZATION!" lamented Navimie.  She continued reading.

I managed to get some pictures for you for your rares collection.
Hope they're OK.  - Ayelena

"Oh, thank you Ayelena!" said Navimie out loud to nobody in particular, thrilled that her friend had thought of her, even when she had been so un"bear"able.  She still wanted to see the Darkmoon Rabbit.  But now at least she had a picture as proof of its existence thanks to her dear guildmate.
Email Post
Labels: darkmoon faire fiction rares