Typhoon Andrew has been around for ages - and it was only recently that I found out that he was an Aussie blogger.  He left a comment on my blog - on my Navispam page no less! - so I thought that since he had noticed me I would make a visit to let him know how much appreciated his visit (and get a pic too!)

I had my one and only true alt on that server (alliance), and wouldn't you know it, he was alliance, so I couldn't talk to him from my Navimie toon on that server (she's horde).  So I got on my mage and went to look for him.

I did a /who and his DK wasn't online.  So I searched his guild and scanned the names.  Wow, there were a lot of people online!  I pulled up his alts page and one of his alts was online!  I quickly sent a whisper and in the time that I had ducked out to check his blog he had logged off.  Noooo!!!  So I kept refreshing the guild but no new people reappeared.  Damn!

So I had a look who else was sitting in a major city and I picked a warlock with a cute name and sent them my usual opening tell.

"Hi there, I was wondering if I could ask you a question about one of your guildies?"
"Sure?" Pikininni replied.  Wow, what a quick reply!
"I was looking for Arkham, he was on just a second ago but I missed him by a minute!  Is he on an alt?"
"He's logged off but he'll be back soon.  Can I help?"
"Oh, it's ok :)" I replied.  "I'm a fan of his.  Well his blog!" Oh, I was sounding like an idiot.
"Oh his blog? aaah.  He's just logged back online."
"Oh really?  Oh good!  Don't tell him, I want to surprise him!"  Oh gosh, I sound like a stalker.  I should have explained myself better.
"Whisper Diamon."
"Thank you for your help!"

I crossed my fingers and hoped it would go OK.  I'm sure it would - he sounds so nice from his blog!  I started typing.


"Hi there, I was wondering if I could have a minute of your time?"
"Yes?"
"My name is Navimie, and I'm a fan of your blog.  I was wondering if I could take a picture with you?"
"Of course you can."
SQUEEEEE!
"I'm very impressed you asked, thanks.  It's quite flattering." he said.
"You came to visit me, and I read your blog," I replied "So I was really, excited when you came to comment on mine.  Can I ask another favour?" I hoped it wasn't too much.  "Can I take the pic with your main?"
"Sure, I'll just log him over."
Yay!  I love a positive response!  It makes me so happy.
"Hi Navie, Andrew's really chuffed that you came to visit him," whispered Pikininni.
"Oh, I hope so! I was a bit scared," I whispered back.  Wait a second.... did she just call me Navie?  I was on my mage Miniices!
"OH!" I said to Pikininni.  "That Andrew has a big mouth!  Did he tell you who I was?"
"Yes, but I wanted to say I think what you're doing is really great."
I was all warm inside.  "Thank you :)" I said.
"I read your blog too," said Pikininni.
Woah. What?? Really?  I had to restrain myself from saying what BootyPantsBear would say "You read me?  What's wrong with you?" because I was having a starstruck moment again.  Gawd everyone must think I walk around with perpetual starstruckness because I seem to go all silly if I find a new reader.  But I can't help it!  Surely every blogger must know what I mean, when they find out someone is reading them?
"NO WAY!!! I’m all starstruck now! Well I must get a shot with you as well!!’ I said.  And I invited her to party with me and Andrew's DK.
"I'll get on my main," she said, declining the invite and switching toons.

Andrew told me that she was his GM.  o.O.  She was so nice and friendly!  Though I thought back to my own guild leader.  He's pretty nice too.  Actually come to think of it, most people are.

Anyway, so I went to Stormwind to meet them and took a picture on top of the parapets at the front of Stormwind. 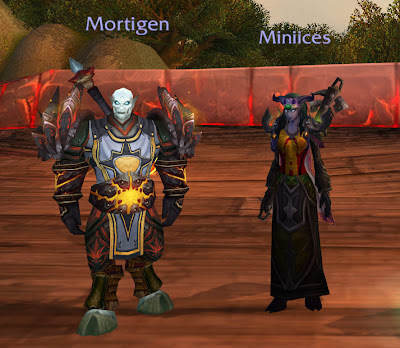 Then I had an idea.  Dragonray was on!  I could port these guys to Shattrath and then get Dragonray to port my lvl 2 Horde toon to Shat and I could take a pic of them with my Navimie toon!  I asked her to come meet Typhoon Andrew as well - he is on her blogroll afterall :)


I had a few questions to ask Andrew - like, why does he seem to like storms?  He is called Typhoon Andrew and his blog is called Eye of the Storm.  I wondered why it was named after a battleground.  He told me he had named his blog that just before the new battleground was announced.  And that Typhoon Andrew was a nickname of his.  I said I hoped it wasn't because of his bowel habits... /phew!  Less baked beans for that man! 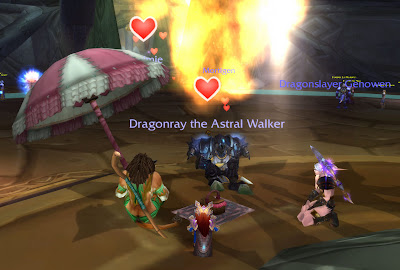 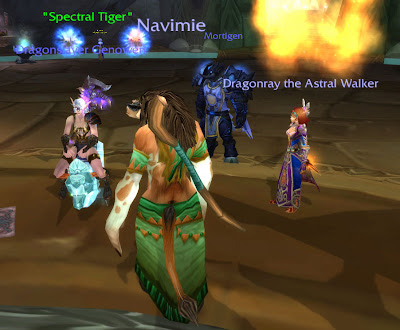 Dragonray had to AFK a bit, and Andrew had some baby aggro, so he too was AFK a bit and I spent a lot of time chatting to Genowen, who told me she had just started blogging, and we chatted about recent events, and she offered to invite me to their guild as she could see I was just in my guild for levelling and I didn't know anyone there.  That was lovely!  I might take her up on that offer if I can get my ass into levelling.... I also was trying to ask her about Andrew's reaction to me turning up out of the blue, and from what she told me he seemed pleased.  He even wrote as much, which is always reassuring to hear.

I had to go after that because it was dinner time for the kids but I'll be back.  That was a lovely visit!  Typhoon Andrew and Genowen, you have been Navispammed!