I had a bit of spare time at work. Hmm, should I go do a Navispam and try my luck? Or go write a blog post?  Hmmm, I thought I want to give it a try.  Off I went to Eldre'Thalas to see if I could see a certain someone - one of the most famous and well respected druid bloggers at present.  That's right!  Jasyla!

I logged in and did a /who Apotheosis and WOW.  The guild was on... in Dragon Soul.  Ok, talking in an instance is one thing, talking in a heroic raid... is another.  Think Navi, think.  Jas will have DBM on, so maybe she won't notice in the middle of a boss fight if I just do a status to get a DBM reply to see where they're up to, so I can see when they've finished killing the boss so I can quickly sneak a word in.

I whisper Jasyla. "Status"
I go an instant reply.  "Hi!!"
Woah!  She must be between boss fights because there were no DBM messages.  I wasn't as nervous meeting Jasyla as I had some of my other heroes - she did ask me to come visit, after all.  Just not, I am sure during heroic Dragon Soul ><

"Sorry for talking during DS!" I said.  "I don't want to disturb."
"Oh, it's OK. We're just doing loot."
Maybe it's because I have listened to Jasyla a lot in the car, and that makes me feel like I know her better (even though it's not quite the same the other way around, but she has listened to my TNB as well) but talking to her is easy.  I asked her when their raid would finish - ugh another 2 hours.  That wasn't good.  It would be time for me to get back to work by then, so maybe I could just come back another day.  We chatted about a few other things and I had to tell her how excited I was to meet her and she said she was excited to be Navispammed.  Wow!  Jasyla, who is so well read and respected, was exited to be having a pic taken with silly little ME! Woot!

She asked me "Oh, do you want a guild invite?"  And I was totally blown away.  My head started to buzz.  I was about to have an alt in Apotheosis, the #1 25 man guild on the server!  "Wait, I haven't filled out an application," I said to Jasyla, thinking about a conversation I had with Godmother just the other day.  "That's Ok, you're coming in as a friend," she said.  Phew.
"Shh, don't tell anyone it's me," I said.
The guild invite was buggy so I relogged and got invited again.  I joined and my screen started to fill with green guild chatter.

And so on!  Anyway, I was pretty excited having an Apotheosis tag that  I was standing around near a tree taking a picture of myself.... 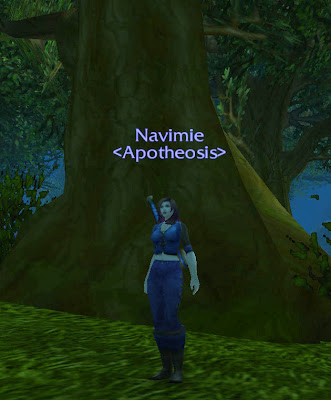 When suddenly I saw an emote of a wave from Jasyla!  I quickly turned around and there she was, in the flesh!  Boy was I excited! :D 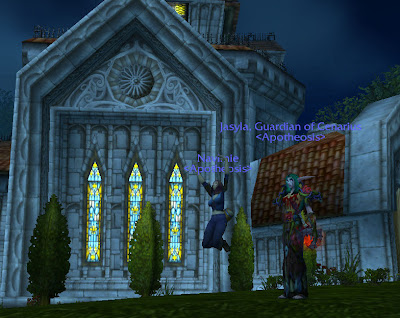 Jasyla was sitting out from a raid boss and came to take some pics with me.  I was so chuffed - this was JASYLA, who I go to for all my resto help!  One of my resto druid heroes!  She probably would think I was being silly, but it is pretty exciting! 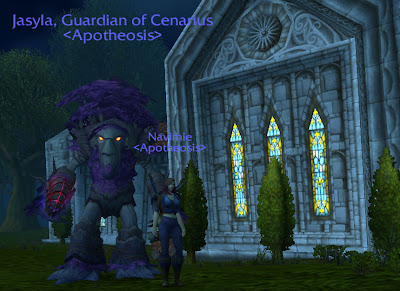 I was suprised she pulled out Jay Leno tree form.  She says she likes the cooldown.  I still hate tree.  It's from vanilla, I think, when it first came out and it was so stupid and slow.  I think I just have tree prejudice (it has improved in spades since Vanilla).

I was at work so I could harldy talk and had to AFK a lot, and I told Jasyla that I would probably have to leave but I thanked her for the photo opportunity!  I didn't get much of a chance to chat to the other guildies (they were raiding after all) and I had work so I hope they didn't get upset at the neglect.  So yay!  Another awesome druid Navispammed!  Cheers Jasyla!