Today I saw something I had never seen before, and that was a wall walking cheat in a battleground.  It was in Warsong Gulch, and we were trying to queue simultaneously with 2 groups, but that was unsuccessful and we ended up in one game and the other group in another.  The gates opened, and we had just jumped off near graveyard, and our flag was picked up, dropped and capped.

There is no way that they can get to our base and back within 5 seconds of the gates opening.

We fought hard for our second flag, trying to keep them off our flag or at least ready to pick it up again if we dropped it, but we managed to get it and we were 2 flags to one for a while.  They tried to cheat again with getting the flag and dropping it in the middle of their flagroom but we returned it.

Sev and Shab had a few deaths trying to pick up the flag but died on the way down because me and Gutsy were dead and couldn't heal them.  At least it stopped them from doing that cheating manoeuvre again.

Then the shaman picked up the last flag and they did try hard to prevent us capping but he got through and we won the game.

I wish I'd reported them then but I was so focussed on trying to make sure they didn't win that I didn't have time.  I know if Lushnek had been there, he would have.

I was telling Sev afterwards, that if it happened on our side, like, if a Horde player had been doing it, I would have told them off, and then immediately left the group.  I don't want to have any part of any cheating.  He was the same.  I think we all were. 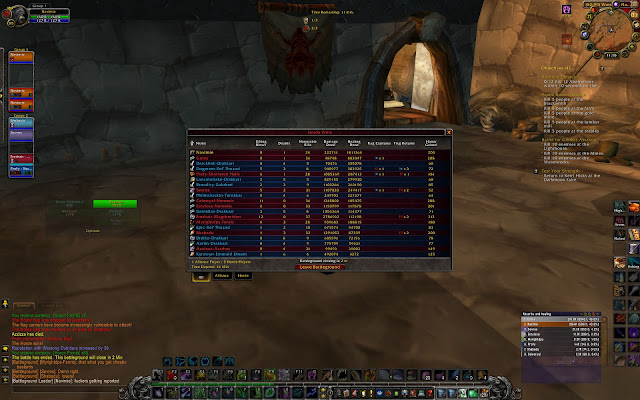