Shared topic - What NPC would I choose to be?

This week's shared topic at Blog Azeroth is about an NPC named after you, proposed by Cymre of Bubbles of Mischief.

If Blizzard added your main as an NPC in WoW, where would they be located and what would be their function? Give us a shot illustrating the fact.

This is an interesting topic put out by Cymre this week.  I must admit I had never considered having my main as an NPC in WoW, but I had wanted to have an item in the game named after me - if only I could be as famous as Phaelia!  Phaelia was a really famous druid blogger, whom I used to read religiously.  Her blog, Resto 4 Life, was one of the most famous resto druid blogs in its day.  Phaelia had an item in World of Warcraft named after her, and I thought that was totally awesome -

Phaelia's Vestments of the Sprouting Seed.

Phaelia left World of Warcraft to have a baby and this was a clear tribute to her.  You can read her thoughts on the awesome item here.

I was so excited, I actually OWNED one when it dropped in Ulduar!  Back then, nobody knew who Phaelia was, and I was a bit quiet on the blog front back then, just blogging what our guild was doing and stuff.  But when I mentioned it recently, something my guildies and friends said had NEVER occurred to me...

That Phaelia was obviously a pun or play on the word FAILURE.

I seriously had never noticed that!  When they all said that I was indignant - how dare they say Phaelia was a failure!  But then I realised what they were saying.... and I wish Phaelia was around to ask whether this was true or not.  It probably is true, I'm just the only dumbassed one around here who doesn't see things in front of her face.

Just for fun, last month I made an item named after myself... still high after winning the Transmog competition. 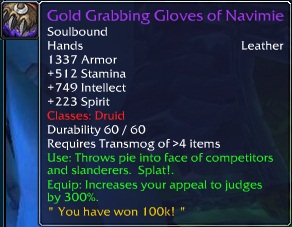 OK, I've gone off topic.  I'm supposed to be talking about an NPC that I would like to have named after myself.  It's actually quite a hard thing to choose.

I thought I would like to be a druid trainer.  But then that I don't know everything about all my specs, so that seems to be a bit... presumptuous.  Overstepping my station perhaps.

Maybe I could be a seller of bags and things, like Fabian Lanzonelli and Haris Pilton.  But somehow that doesn't quite appeal to me, even though I do like making bags IRL and in game. 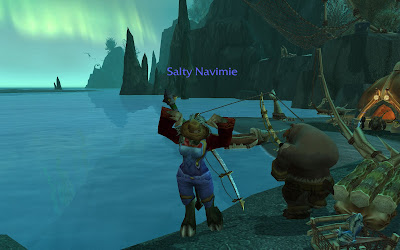