Project: Confuse the enemy (and look like Laughing stocks while we're at it)

Sev was on this evening so we thought we'd sneak in some PvP.  But first we had to try to farm that elusive helm for this project.  So off to Gruul's Lair we went, and lucky for us it dropped!  So our project was complete!

So here we are... transmogging ourselves into another class! 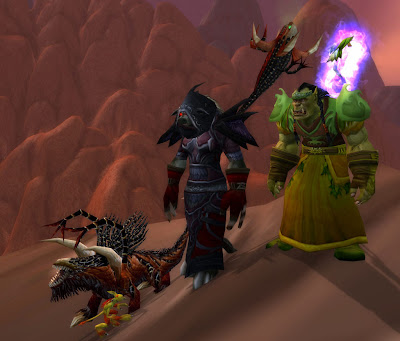 So what are this abhorrent outfits?

You may recall some time ago, there was Saga's worst dressed warlock competition. Erinys had a fantastic entry which started my whole idea.

And this is what she used:
Sev spiced it up with Sylvan Crown, which adds a nice touch!  The only thing we had to farm was Draenic Wildstaff which was easy enough (Auchenai Crypts).  It took me ages though, scouring the AH on alliance and horde to get those things.

I was having difficulty with a warlocky costume, so I got Kamalia to help me

I have been struggling to find leather clothes that make me look warlocky. Since I saw Erinys' druid lock I wanted to try the reciprocal.  Have you got any ideas?

She got back to me within a DAY! 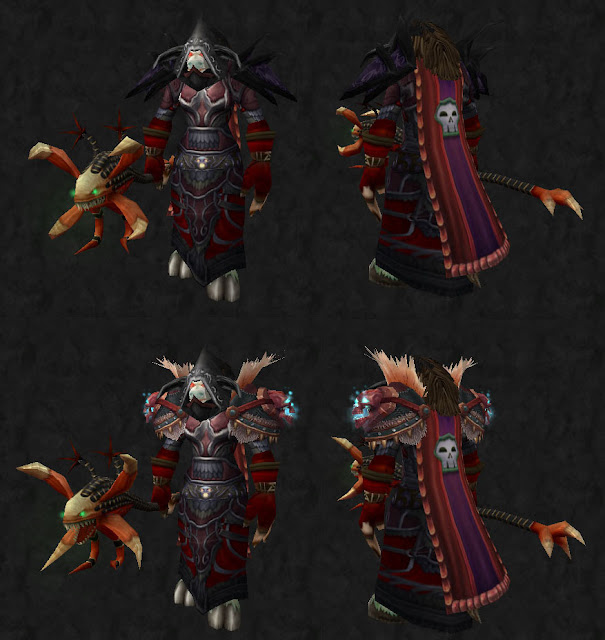 Hee hee, what a fun idea! I'd love to see both of these concepts

She sent me that email more than a month ago and it has taken me that long to get all the things!  I don't have the cloak yet so I'm not showign it but once I do I'll add it to the set.  I ended up using a different belt, because the Soul Devouring Cinch is not easy to come by (though there is a vendor one up in Dalaran, so I might go check that out)
So I thought it was a pretty amusing transmog.  Here I am, a tauren, dressing like a warlock (there are NO Tauren warlocks) and there's Sev, dressing like a druid (there are NO Orc druids).   Do you think we might confuse our competition in 2s?  Maybe we can get them laughing at us so hard that we might win because of our outrageous outfits were a distraction? :P

Anyway, so we decided to try PvPing in them.  Arv was on so I dragged him along to some BGs with me and Sev and we had a nice run.  We won every random BG we did.  It was Isle of Conquest weekend (/groan) and we got 2 of those, which we won (the first one was rather iffy, and I was surprised we won) and we had a WSG, AB and a Twin peaks as well.  I have never figured out why all the rogues go to Docks stealthed, so I went to see but it was to no avail because we ended up getting Docks.  So the mystery remains.

Arathi Basin was a good game too.  Comfortable win with some good battles.  Hunters are REALLY annoying and need to die.  Rogues too.


I got an achievement in Twin peaks, so that was pretty cool (Two-Timer) though that flag run was pretty hair raising!  I picked up the flag because everyone seemed to be busy in the flagroom killing alliance, and then I bolted out (probably a bad idea since I ran with no backup), and then I made it across the river and got stuck with a hunter and another alliance (Rogue? maybe) and I was panicking trying to live.. and I tried to type in party for Sev to come save me and all I got out was "Hel Sev" and I ran towards the rest of my team.. away from our flag room.  Suddenly, the Horde flag was dropped, and I was way out in midfield!  So I turned and piss bolted back to the room... I was running in, 2 alliance were heading for the flag... but they were too slow!  Bang! Cap and achievement woot!  The last cap, Sev carried it and he was alone whilst I was in the room and I sprinted out to save my poor friend who was getting beat on.  Then we ran all the way back to our room, and a hunter and a boomkin were in pursuit.  Sev pointed it out to me, and I dotted the hunter up with my crappy dots, and Sev did as well, and we ran into the room and the hunter had gone down significantly in health by then and then we had a feral druid turn up and ... a healer, though I cannot remember what that healer was, maybe... a shaman?  Anyway, I was busy healing and noobfiring, Sev was killing stuff, and the hunter died, the boomkin was low, then we focussed on the poor healer who probably wasn't well geared and went splat, then we finished off the boomkin and then turned our attention to that annoying feral druid who had decided to go bear.  He was the hardest to kill it turned out, with bear form Frenzied regeneration, but suddenly the flag was returned and bang!  Sev capped and the feral was dead.  It really felt like a challenging fight and after the match was over I was telling Sev how thrilling that battle in the room was.  There is nothing like a good PvP to get your heart going - if we had dropped the flag it would still have been epic, but because we didn't it felt even more amazing.

Warsong Gulch we had a nice 3 cap with a warrior and druid running the flag.  There was this annoying rogue who kept ganking me when I was trying to get away so I had to turn my attention to him otherwise I would not survive 1/4 of the way up the field, but you know my DPS, it's shit, and though he was trying really hard, he could not get me down when I had full cooldowns up.  The coward ran away when I was fleecing him (I'd gotten him just under half health and his CDs were used) and so I went to get up the field to heal.  But no, that little prick came for me again and I was caught stunned in travel form so I was dying - thank God Arv came and started beating the crap out of that little shit, because then he ran away and high tailed it again.  During that time, the Alliance flag had been picked up, and made it back to our room, and Sev was saying "Nav, what are you doing, FC remember????"  and I was like "I was being GANKED Sev!"  "Stop playing with silly rogues, and come heal the FC!"

Stop playing with.... ??  The swear words started to pour out of my fingers onto the screen.

So I high tailed it BACK into the room, healed our FC (and got complimented by him, which was pleasant) and we won our WSG.

Arv had to go by then and Sev was tired too I think, so we called it a day.  But boy was it a great evening in PvP.

Maybe our hideous costumes are good luck charms after all :)  Project: Confuse the Enemy was a success!