You murderers! Why... why would you kill such a noble animal?!  - Shannox

This post has been hanging around in my draft section for ages, and I've decided to dust it off and finish it because my dear friend Euphyley of WoW Rare Spawns has turned 1!  Well, her blog has!  And the sweet and generous soul that she is, she's giving away a pet in a competition to write about our favourite rare spawn.

I want to know what your favorite rare spawn is - or the one that you will never forget finding in game, and why. You choose what you want to write about. Be creative.
-Euphyley

I'm not really in it to win a pet (I think I have all of them bar one!) but I could not resist to write about something that I really like, which are Rare Spawns.

A lot of people know I like to collect pictures of Rare Spawns.  I actually prefer them in their natural setting, not in combat.

I am one of those people who loves to look at rares.  I don't like killing them, unless it's for an achievement.  I think of them like an endangered species, something that should be there for everyone to look at and appreciate, though really, they come back after 12 hours or so, so it's not like I've wiped them off the face of the earth or driven them to extinction.  However, I dislike unnecessary killing, and I subscribe to the "Lunk" attitude of non killing.

All things excellent are as difficult as they are rare.  - Baruch Spinoza

My original post was about my 3 favourite rares, whom in my opinion are beautiful, unique and majestic, and whittling it down to just one was really hard.  But let me introduce them to you before I submit my actual favourite into the competition. 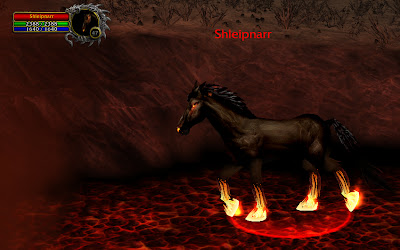 Meet Shleipnarr.  This beautiful demonic horse is a reference to Sleipnir, Odin's 8 legged mount in Norse mythology.  This is the only rare of this model, and I think he is magnificient.  He's found in Searing Gorge in the north eastern part of the canyon.
Hilda Ellis Davidson says that "the eight-legged horse of Odin is the typical steed of the shaman".  What an interesting thing to say! 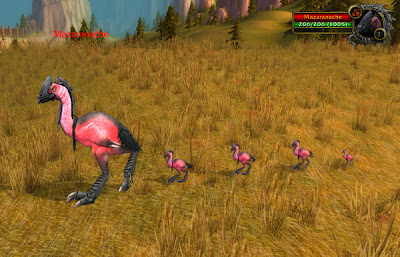 Mazzranache, the pink strider from Mulgore, is not so unique anymore because you can get a Lovebird mount and the Mulgore hatchling which have the same model.  Not that there is anything wrong with it since Euphy uses all 3 in her famous avatar pic.  However, I have always loved this strider, I have one tamed on my baby hunter, and I named it Flamingo.  The baby striders in this pic are really cute! 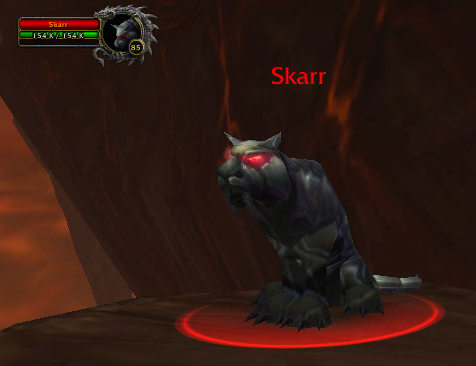 The third rare, Skarr, is one that I only saw in person TODAY! Previously, I had only seen her tamed and from a picture Souglyy had sent me.  She is so beautiful, with those red eyes and black metallic/rock skin.  I was thinking about her today and thought I would try my luck in Molten Front to capture a good close up pic of this beautiful creature.

So, the choice of rare was made easier.  And here is my story.

Navimie wiped the sweat from her brow as she surveyed the Molten Front.  Everywhere she looked Guardians of Hyjal were pushing back Charred Combatants.  Every day, there seemed to be new threats.  Today the Molten Behemoths were assaulting Malfurion's Breach, but the Hyjal Defenders had done a magnificent job keeping them at bay.  Throughout the rocky battlefield, Navimie saw wounded soldiers, and she rushed out, dodging fireballs and murmuring the spell to cast rejuvenation on her targets.  Her heart warmed as she watched the shimmering leaves of her healing spell swirling protectively around a fallen Nightelf, and he opened his eyes, fatigue and exhaustion lifting from him as he climbed shakily to his feet.  He bowed unsteadily to her as he staggered back towards Malfurion's Breach.  "I was surely done for.  I owe you greatly, tauren."

Navimie nodded in return, her hands moving as she cast the next healing spell on a nearby fallen tauren who was about to be trampled by an angry Molten Behemoth.  His hooves kicked up a spray of pebbles as he rolled out of harm's way.  "I'm in your debt, druid," he called out as he made his way back to camp.

"Walk with the Earthmother, brother," returned Navimie.  As she turned back to search for the next victim, she was thrown back by a molten stomp from an injured giant, bellowing in rage from the volley of arrows fired at him by the Hyjal Marksmen.  She tripped, and stumbled into a fire elemental who turned to attack her, fireballs singing the feathers on her embroidered chestpiece.  "Damn it!" she swore, moonfiring her assailant.  She swung at him with her mace, a glancing blow, before she threw an insect swarm on the elemental, causing a momentary distraction.  A series of casts of starfire finished him off.  She ran towards the edge of the field, avoiding the fighting, in the hope she could see her prey.

Beyond the fields of combat, lay the floating islands of the Molten front.  Skarr often hid here.  As she crested the edge of Magma springs, her heart leapt as she caught a glimpse of the cat high above her, leaping between the hanging rocks, which were known to crumble underfoot when stepped upon.  How was she going to get up there? she wondered.  She would have to go to the Furnace.

General Taldris Moonfall was often looking for armed escorts for the Druids of the Talon to get to the Furnace.  The General was resplendent in her green-gold armour, fine trophies displaying her prowess on the battlefield in Northrend's Ulduar.  Navimie was well acquainted with the General's brother, Soren Moonfall, who often sent adventurers into Sethria's roost to help push back Ragnaros' minions.

"If you want to aid the Druids of the Talon, wait for one of Omnuron's Windcallers to start pushing through the fire," General Moonfall said to Navimie, placing her slender hand on Navimie's shoulder.  "Stay close to him, and keep him safe from any attackers within the flames."  Navimie bowed to the General, and hurried to Windcaller Voramus' side, who nodded at her solemnly.

"I will go with you by foot and clear the path of flames. It will take all my concentration to keep the fire at bay, so you need to make sure that I remain safe."

"You have my word, Windcaller," said Navimie.  She averted her eyes shyly from his bare chest.  Why did these night elves not protect their skin in this blazing heat?

Fortunately few assassins were aware that the Druids were pushing their way to the Furnace through the Flames.  Battling the invaders proved easy, and when Navimie reached her destination, she was pleased to see Thisalee Crow, the young Night Elf druid she had met at the Shrine of Aviana.

"Elune light your path, Navimie, it has been a while," said Thisalee, holding out her hand in greeting.
Navimie lay her hand upon Thisalee's in a return greeting.  "May the eternal sun shine upon thee."  The two of them broke out in laughter.
"Suns and moons, we should be greeting each other with Cenarion greetings, my druid sister," said Thisalee, grinning cheekily.
"Shh, Malfurion is at the Breach, he might hear us, and then we really will be in trouble!" said Navimie, pretending to look over her shoulder guiltily.  "How fare you, really?"
Thisalee sighed.  "Our fellow druid, Choluna, has asked me to collect any specimens of plant life that we might find here in the Firelands...I don't know whose idea it was to bring scholars to a warfront," she complained.  Thisalee looked at Navimie hopefully.  "Do you think you could help me out?

Navimie was wracked with guilt.  She really wanted to go catch a glimpse of Skarr before one of the hunters came and captured her, or worse, a trophy seeker came to kill her.  "I have another errand to do first, Thisalee," Navimie said.  "But I will return to help you, I promise."

"Thank you, Navimie," said Thisalee, a look of relief on her face.  They both turned as an Orc warrior approached.  "Oh, perhaps you don't have to assist me, this Orc may get me just what I need."

"Oh, perfect," said Navimie, as she hailed the Orc, and headed back to the entrance.  "Til next we meet," she said, mimicking the Night Elf farewell.

It was an appropriate farewell.  To get out of the cave, Navimie had to ride the wind to the surface, and it was always a bumpy one, to say the least.  When she landed at the top, she put a hand to her stomach to settle it, trying not to think about the time Lushnek had departed the cave with her and promptly brought up his last meal of Severed Sagefish head and deposited it noisily on the blackened rocks.  Thank goodness the smell of sulfur had hidden the smell of his vomit.

Navimie hurried to the edge, and could see Skarr on the floating rocks between The Furnace and Fireplume Peak.  The cat was lazily licking her paw, as she warily surveyed her surroundings.  Shifting into cat form and prowling, Navimie leapt onto the rocks, her heart pounding as she edged closer and closer to the crumbling boulders closest to Skarr.

Skarr was even more beautiful at close range.  Navimie had brought one of those fantastic goblin cameras with her and was capturing images, trying to catch the perfect shot. Her glossy coat, her ruby red eyes, all bespoke power, strength and grace.  Being a cat herself in shapeshift form, Navimie felt even more close to the creature, and her throat closed as she suddenly saw Skarr looking directly at her, head cocked, a low growl gathering in her throat.  Navimie took a hesitant step back, and she looked down and suddenly realised that the stone she was crouching on had cracked and was about to break into pieces.  She turned to jump away, but the rock fell from beneath her.

"Ahhhhh!"  Navimie screamed, trying to shift into flight form, but somehow, her ability to fly here was blocked.  Suddenly, strong talons gripped her shoulders, and a she looked up to see a Druid of the Talon in crow form, carrying her to safety.

"Thank you, brother," she said, as he deposited her safely onto solid ground again.  The druid shifted back into his Night Elf form and bowed to her.  "Just in the nick of time, young druid," he said.  "Next time, watch your step.  You may not be so lucky in the future."

Navimie looked back over the rocks, and saw Skarr, looking at her, her wary, ruby red eyes unreadable.  She waved at the beautiful rare spawn and activated her hearthstone, so she could add her new picture to her ever growing collection.