Mental illness in the WoW and blogging community

As a child my understanding of mental illness was the crazy raving loonies who talked to themselves or the ones Batman locked away in Arkham asylum.  However, now that I'm older, you realise mental illness is not just about psychosis and schizophrenia - mood disorders such as depression, mania and bipolar disorders are all part of it too. 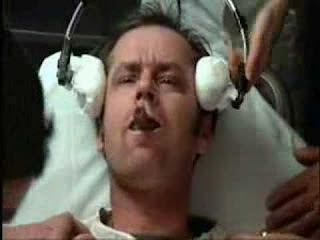 In medical school, you get a much better idea of the whole thing.  You do time on the mental wards, and you see all these people, normal everyday people, suffering from these crippling diseases.  And they are crippling.  Not in the sense that you can't walk or anything, but you can't work.  You can't think. You can't make reasonable decisions.  The most severe ones would have electroconvulsive therapy (ECT) to cure their depression - nothing inhumane like how Jack Nicholoson was in One Flew Over the Cuckoo's Nest, but it seemed extreme.   But it did work.


These days, in my line of work anyway, mental illness seems so commonplace I hardly even notice it anymore.  And if you asked me, I would think it felt like 1 in 2 Australians would suffer a mental illness, because so many people are on antidepressants, antipsychotics these days.  I do anaesthesia for ECT and sometimes it is so amazing that someone can go from being catatonic depression to being normal and having a conversation again after a few treatments, and it's so humane now.  Modern medicine has advanced so much these days.

So why am I bringing this up and what has this got to do with World of Warcraft or blogging for that matter?


I'll use depression as the example because that is the most common mental illness.  As a medical practitioner, I mostly see the medication side of things.  In this modern day and age, I worry that the general population think that "popping a pill" can fix any problem.  It is part of the cure, and for some, it may be all the cure they needed, but most people will need more than that to fix their depression.

Look at it like trying to lose weight.  A combination of altered diet, exercise and medications (as well as fixing up any other health problems) should be the key to success.   One of those items alone CAN be enough to change your weight problem, but more often than not it will not fix it entirely, or give the desired result.


Cognitive Behavioural Therapy sounds like some of that psychology mumbo jumbo hippy stuff.  However, what CBT really does is help you understand, manage and change your thoughts (cognitions) and actions (behaviour). This form of therapy has been shown to be very effective for a whole range of things but is particularly effective if you have depression or anxiety.  But CBT could be useful for a whole variety of things!  Parenting, weight loss, anger management, conquering your phobias, how to cope with things... changing your mindset and focussing on things differently can be the key to a permanent solution.


I read a lot of blogs where people have written about or shared experiences with their battle with mental illness.  There are SO many - on my blogroll alone I would say at least one third of them have talked about their battles with depression.  Oestrus, Lil'Peanut, Apple Cider Mage, even Erinys, and most recently Aidrana have all shared their thoughts on depression.  I think, that sharing it, analysing their illness, is an excellent adjuvant therapy to go with the medication. I think writing and analysing your own behaviours is a way to doing CBT yourself without having to go see a psychologist.  Or maybe even a therapy after seeing a psychologist.  Some of these writings may help others who are afraid to share or acknowledge their disease, and helping others is always a great goal.


You could sort of see that happening with World of Warcraft too.  People with mental illness can feel isolated, and playing the game is one way to socialise.  A few guildies talk about their struggles with their medications and how it affects their mood disorders, and I listen, as it is all fascinating to me, as I am used to seeing the most severe cases in the hospital setting, and seeing the functioning ones gives you a sense of hope for those who are severely disabled with their disorders.  It would be cool if those with severe depressive problems could perhaps alter their thinking - you know, each of those red mobs in WoW is a "bad thought"(eg. "I'm hopeless", "Everyone hates me", "There's no hope") and destroying all those will bring balance to the World... and perhaps within their own mind as well.  But you would need a positive reinforcment too - like focussing on the positive things to make you feel more positive about yourself.  Not sure how to do that in game, I thought maybe mining or herbing, but most people see those as a chore rather than something that gives you positive reinforcement.  Gosh positively reinforcing those nodes may mean I'll never get any herbs or mines.  I would love to see if someone could turn WoW into some sort of CBT :)


For those who don't suffer a mental disorder, it can be difficult to understand someone who has one.  People who don't understand mental disorders say things like "Oh, it's a first world disease, only rich people get depressed because they're bored."  "I don't get depressed, I've got lots of things to occupy myself."  Myself, I have never suffered from a mood disorder, but that doesn't mean I don't understand how crippling it can be - I've seen those cases.  One of my colleagues once said I had mania, or hypomania.  Mania, which is elevated mood disorder, is also a mental illness - it's characterised by abnormally elevated or irritable mood, arousal, and/ or energy levels, even hypersexuality.  Mania can vary from mild mania (hypomania) to full blown mania with delusions of grandeur, psychosis, aggression or even self neglect from pursuit of the impossible of idea.

Individuals in a hypomanic state have a decreased need for sleep, are extremely outgoing and competitive, and have a great deal of energy. However, unlike with full mania, those with hypomanic symptoms are often fully functioning.  Classic symptoms of hypomania include mild euphoria, a flood of ideas, seemingly endless energy, and a desire and drive for success and hypomania is sometimes credited with increasing creativity and productive energy.  How can this sound like a mental disorder??  Personally,  I don't think that it is, as individuals with this function well.  If however they don't function well (get isolated, can't work, get aggressive or delusional) then it becomes a problem.

LOL, I'm doing what most medical students do.  90% of medical students diagnose themselves with a psychiatric disorder after doing their psych terms.  Personality disorders are classic!  If you read them, you would probably end up diagnosing yourself with one or two as well!  But I think the important thing to remember is that you have a mental illness if it affects your function (or people think it's affecting your function because your insight to your disability is poor).  If it has affected your function then it is a problem and needs some sort of intervention.  And for those of you who have conquered it, or are struggling with it, I hope you find what works for you - but writing about it, changing your mindset about it, really does help.
Email Post
Labels: health Navi's thoughts