So this is my one that started it all...

Cymre at Bubbles of Mischief asked to see our very first screenshot - one that has survived the test of time and hard drive fails and new computers.


Show us your very first screenshot from the game. Tell us about it, including the date, what you remember about the photo and who was in it with you. Do they still play?

Digging around in my old files, this was the oldest picture I found.  It's like looking at the clothes you wore in the 80s... (like, OMG what was I wearing!!!) 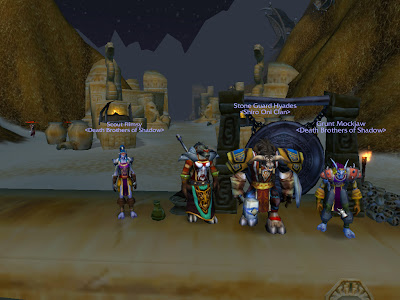 This was taken in February 2006.  I don't remember what level I was, but it looks like I was 40s or 50s.  It was taken in Zul'Farrak, near Gahz'rilla's pool.  Hyades, my husband was a tauren warrior and he used to tank up till Lich King.  He doesn't play WoW anymore.  Mockjaw was my epal (think penpals but via email) that I had since my medical school days... so I think we were friends since about 1995 or so.  And we used to send lots of long emails until we played WoW and then we got lazy and we talk to each other in game now via RealID.  He even made his toon on my server so we could talk more (back in the days of no RealID).  Flimsy was a friend of his, and they were quite good friends, but they ended up having a falling out.  Mockjaw still plays though, but I don't know about Flimsy.
OMG what am I wearing???  I cringe looking at my eyesore clothes, I can imagine Kamalia looking at it and saying Tsk Tsk Tsk Navi what are you wearing???  In this era of Transmog, you can't go around looking like that anymore, or the Transmog police will descend on you.
Email Post
Labels: screenshots shared topic