Gnomeageddon's thing made me do something I hadn't done before - and that was log onto another server where I had a low level alt already to talk to another blogger.
Voros tweeted me a few days ago, after I'd made a comment to Gnomeageddon about being Aussie, to say he and Glow were both Aussie. It took me a little while to realise that not only were he and Glow BOTH Aussie, and BOTH blogging, they were BOTH in the same guild!  So when Glow made a stray comment to me that she had no horde toons on Dath, I thought I'd go see if they were there on Saurfang.
I logged in a few times at night, and /who Labyrinth and nobody would be online.  Then tonight, when I logged on, there was one person online and I asked them if Glow had been on.  She had logged, he said.  So I was getting on Twitter to tell Cymre something, and I saw Glow had tweeted about her sexy new Blazing Drake.  So I tweeted her back: 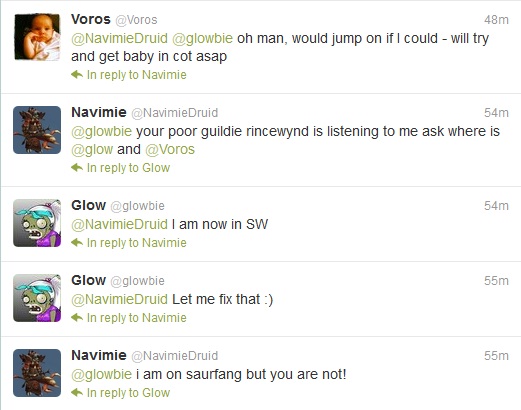 So I got to meet Glow and Voros!  I was fan struck!  Glow of course looks just like her pictures, and I think that the whole T13 looks heaps nicer on a night elf than on a tauren.  Voros seemed amused that Glow was famous, and I wonder why it is that males seem to take such nice pics (well, Fannon is the only other one I'm thinking of really).  So being the dork that I am I had to take a pic with them. 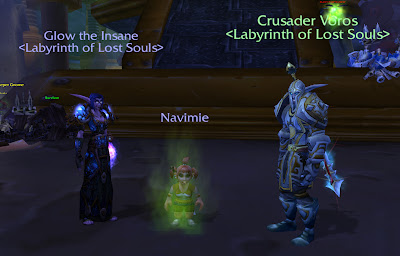 Even Roshii came along to see what I was up to.  He was astounded.  "You actually talk to other bloggers in game?"  That comment reminded me of this conversation he had with his mother that made me laugh so hard:
Roshii: "I'm meeting up with some of my friends from the game."
Roshii's Mum: "Oh, but they're not real people are they?  They're just computer people?"
Roshii:  "No, mum, they're real people.  Real people play the game."
Roshii's Mum: "How do you meet computer people when they're in the computer?  You mean you talk to them in the computer?"
Roshii:  "No, people play these other people in game, and I'm going to go catch up with them."
Roshii's Mum:  "I don't understand how you can meet people who aren't real."
Roshii:  /sigh "Never mind, mum!"
So he came along to see who I was talking about.  And I said Glow is the one with that awesome Baleroc strat that we used, that was recommended to me by my friend Cavendar (who was also in game at the time and I said to him "OMG guess who I'm talking to, I'm talking to GLOW whose Baleroc strat you made me read").  So I chatted to them for a little while and then it was rather late so we all said farewell, and they both said they would say hi on Dath.
Why does everyone have to be alliance?  I'll never get to try and play with bloggers in some sort of fun raid/twitterland thing since I'm the opposing faction...
Email Post
Labels: bloggers meetups