My Lashtail Hatchling - reunited at last!

This Lashtail Hatchling and I have been through a lot together.  I did start the quest chain before Cataclysm but I didn't finish it, and when Cataclysm came out, I had to start all over again.  I didn't realise that, I thought I could just pick up where I left off, but nooo... back to the beginning again.
It starts in Stranglethorn Vale where the Warchief had sent me (Warchief's Command: Northern Stranglethorn Vale!), and Commander Aggro'gosh told me to go and destroy Lashtail eggs in The Defense of Grom'gol: Raptor Risk.
When smashing those eggs, I got a Lashtail Raptor Egg Fragment, and this little raptor is looking up at me and I take him back to Grom'gol in A Lashtail Hatchling.  But my Lashtail was hungry so while I was doing another quest killing Murlocs, she ate Murkgill meat in I Think She's Hungry.
While I was doing some other quests involving Trolls in Stranglethorn, she runs up and grabs a skull from one of those skull piles and is carrying it around.  Which starts another quest, Favored Skull. So I take the skull back to Grom'gol to Nimboya who is standing next to the cauldron, and once I hand that quest in, I got another quest A Nose For this Sort of Thing, from the skull!! In the next quest, I wander around killing trolls in a parallel quest and my hatchling digs up Zuuldaian Fetishes.  Once that is done, it's onto Who's a Big Troll, where I go and kill Gan'zulah, for his body.... creepy  Then it's off to kill more Skullsplitter trolls for some Mojo and when we're done, who appears... Bloodlord Mandokir.  I just helped him rebuild his body!!!  And he makes me give him my little Lashtail... :(
So he runs off to ZG with my Lashtail hatchling.  But, Nimboya sends me to Priestess Hu'rala who then makes me get Jungle Stalker Feathers for Mind Vision so I can see through they eyes of my hatchling.  So then I See Raptor.  She's being held prisoner!  So now I have to go get some troll brains so I can do some Mind Control.  Now I will Be Raptor!
This is a really fun quest.  Here you take control of your raptor and you are running away from Mandokir and first you have to speak to one raptor so you can learn hot to chew through nets, then you get to the next raptor and steal some food from a sleeping troll, then he teaches you how to take burning torches from braziers and burn tikis to distract trolls so you can run past them.  After you burn a few tikis the next raptor teaches you how to take skulls and put them in the path of trolls so they will trip and fall over.  So two patrols fell off the bridges.  Then one more tiki to burn.. and freedom!
But noooooo....
Mandokir catches you (the raptor hatchling) and takes you away, so you will never run away again... and you also witness something with Shade of Hexxer...
Fortunately when you're doing that controlling raptor quest, if you fail it just puts you back to the last raptor you spoke to.  I think I had the worst time with burning Tikis.
So Hu'rala sends you to talk to Surkhan and he tells you that Jindo is trying to bring back Hakkar.
So then it's off to ZG!  Like I wasn't sick of ZG already before 4.3... but here I am doing it again.  I get to Mandokir and I can see my hatchling all tied up! 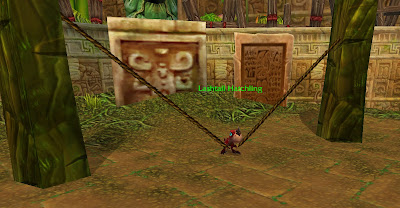 Once Mandokir is killed, the Hatchling has a quest An Old Friend, and I was reunited with my Lashtail hatchling.  She's a bit bigger than the other raptor hatchlings I have.  But she's mine at last :) 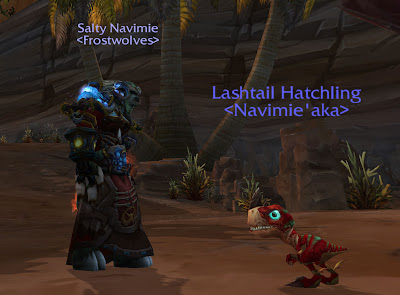