Pilgrim and thanking time, put into a little rhyme The time of year had come again. Undead, Orcs, Trolls and Tauren
Come together, celebrate and give our thanks
Outside every major city, tables laid out nice and pretty
And we sit down side by side and eat in ranks.

It's the gift of food we're sharing, and that sharing means we're caring
But there's more then food and eating in the fun.
You can claim a Pilgrim title, completing all achievements vital,
Turkey Cage is a cool pet when you are done.

So, Achievements? You may ask, and I say, well there's a task
You can start with Now We're Cookin' which is easy
Then go try do Turkinator (though that's really best done later
As when nobody is on, it's easy peasy).

Pilgrim's Paunch and Pilgrim's Peril, one is simple, one is feral
Turkey Lurkey's great for making rogues all heated
So while they are all a'crying, Ikiss screams coz he is dying
And so Terrokar Turkey Time you've completed. 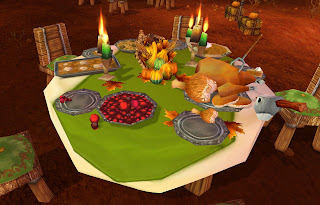 If you have an inner child, "FOOD FIGHT!"'s fun and really wild
As opposed to Pilgrim's Progress, such a chore!
Sharing is caring is the last, where you'll have to break your fast
You'll eat till you can't stomach any more.

As this is the time of thanking, I'd better stop the fluff and wanking
And get down to the real business of the day
I will thank those who inspire, me to be a better writer
And so now I will begin, if that's ok!

It was Jasyla who once said, that if you want to be read
You should try and post some comments on their writing.
But 'twas Serenity Saz and 15 days of screenshot jazz
Was what really got my creative mind alighting.

Angelya had such great screenies, and encouraging, never meanies
Because of her I began to explore some other pages
Amerence she was so nice, Windsoar gave me some advice
I felt so new even though I'd been around for ages.

It was Draccus with his story, with it's trials, and fights and glory
That made me look at WoW fan fiction in new light.
Tzufit's posts, present and past, each one better than the last
Inspired me to choose new topics 'bout which to write.

I only have a couple more, please be patient, please don't snore
Akabeko and Jamin deserve a mention
Every comment they reply, so you don't feel ignored or shy
You're so kind and thank you all for your attention! 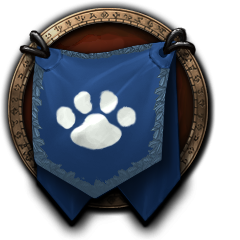 Now the contest part is done (and while doing it was fun)
Now it's time to thank my guildies for support
Though it may just be a game, WoW just wouldn't be the same,
Without Frostwolves and my friends who hold the fort.

Among those I want to thank, one would be our DK Tank,
Hwired's animal mix-ups keep raids amused
Lush does DKP updates, and logs me in when I am late
Fue keeps getting his directions all confused.

Sev plays music to defuse, and hilarity ensues,
Moo surprises us with jokes about his balls
Belinia always brings the food, he is such an awesome dude
And oh there's Faith and all her accidental falls.

Aza's achievement points are gaining (but in guild I am still reigning)
Roshii still is hunting down all his rare mounts
Ayel's always polite and pleasant; Lac is busy at the present
And Beauti seems to be there when it counts.

Only a few more I will mention, while I still have your attention,
Yuda and Tacky's posts were great as I recall
My friends Shaba and dear Flex, who boost my pageviews I suspect
A happy Pilgrim's bounty to you all!
Email Post
Labels: pilgrim's bounty shared topic