It's hard when you're at work and you're itching to get on and see all the changes with patch.  I logged in just now and got my Tyrael's charger, which does look rather lovely. 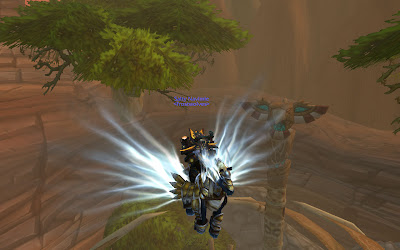 And to have a look at Void storage and Transmogger.  I'd hate to see it at peak hour.  I deposited some of my stuff in but it doesn't take Unique soulbound stuff which is a lot of my tabards and other holiday items and silly dress up things, so that is annoying.  And I haven't got time to do my Transmog set yet, so I'll sort that out later - I don't have the bag space at the moment either. 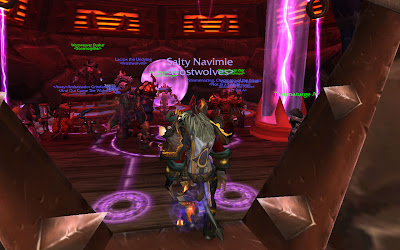 A few guildies online doing the new instances, and Nok was doing LFR on his DK.  He said it was easy.  Sounds like we'll have some easy loot tonight - hopefully knock half the place out in one night.

I tried to read up a bit on the raids and my head is all full of purple blobs and green blobs and I can't for the life of me remember which is what.  Tonight shouldn't be too much of an issue - it will be Thursday when we break up for 10s that will be the time to pull out that knowledge.