This week's guests are Sevros and Azadelta, our two high dps warlocks both different specs (Affliction and Destruction respectively).  They are our two locks doing the staff quest (Sev being first and Az being second) and unlike most other players of the same class in the guild, these two are really good friends - something that's really hard when you are competing for Tier, gear and Legendaries. 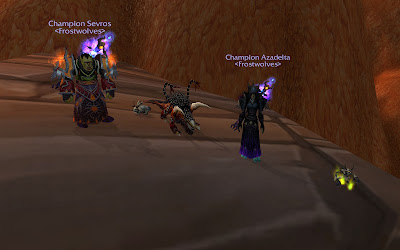 So you guys are the highest 2 warlocks in the guild and you guys are great friends right?
S - .... :P Yeah
A - Of course ^^, me and Sev have been good friends since we met back in vanilla
S - Yep we PVPd together in vanilla bgs
A - Both champions :D
S - :) Both use Defilers tabard mostly still
A - Best tabard ever, but you gotta keep the style going
A - It doesnt fit in well with the T12 =p
S - Glowing green skulls never die!

Do you ever have class rivalry? like on dps meters?
S - No absolutely not, what are dps meters?
A - >=)
S - But if we did I'd be well ahead
A - Always a bit of rivalry with damage
S - =p
A - Ahead? pah!
A - I couldn't see you from the number 1 position!
S - Yes, very pretty on those single target fights, but on a REAL fight with lots of mobs....
A - Only bosses count!
S - Like Beth and Rhyo?
A - Multidotting aoe seed spam hacks imo
A - Pah! I do alright on Beth let's not talk about Rhy >.>
S - Hmm yes we should mention, Az is a fire mage not a warlock
A - Fire mage has nothing on me!
S - He calls himself "destro" but we all know what that means
A - Affliction is just code for lazy imo
A - Why wait to kill something?
A - Burn it imo
S - Pyroblast ... soulfire... are we getting picky over spell names now?
S - Yeah but at least I can wait to kill multiple somethings at the same time :P
A - Not my fault! rain of fire sucks!

So why not demo?  Neither of you is demo off are you?
S - Hunter wannabes?
S - No
A - Personally, it's a play style choice
S - Pet reliant, cooldown reliant, great at AOE but... no
A - I have been demo in the past, but in cata I have found the play to be somewhat slow
S - Besides, I'd have to give up my felpuppy for a heavily muscled naked blue man.  You're the one with the Avatar name
A - As destro, or even as aff, haste is our main stat, where as demo focuses on mastery
S - Yeah, I feel the need
A - With mastery stacking spells tend to be rather... slow
S - The need for speed
S - Hmm this blog post may be a little long
A - No kidding :P

So the legendary in Firelands was all about you two really :P Was there any rivalry in terms of who was gonna get it?
A - I wont' lie.  I wanted it :P
S - A bit to start but Az was pretty good about me getting it first
A - But if anyone else was gonna get it, I was glad Sev will get it first
S - And we'll definitely go back and finish Az's
S - Maybe sometime around patch 6.0
A - In the grand scheme of things we ended very close to each other
S - :P
A - Sev will finish his next week, and I am only about 3 weeks behind
S - We'll do some alt runs to finish off Az's staff in 4.3
S - Then stand around in Org in dragon form making bad "I'm feeling kinda blue" jokes
A - LOL
A - Gonna be epic!

I still remember you guys talking about the original quest... in Nexus.. Do you still remember it?
A - You had to bring up the nexus Navi... it was a bad memory
S - Yes but we can't put what we were saying in print
A - ...
S - Children might read this blog Navi!
S - Oddly, I found some of the packs hard, and the last boss really simple, Az breezed through the mobs and then started yelling at the last boss
A - I had a more difficult time than Sev on the boss...
A - Was just not built for destro
S - Yeah drain life has its moments

How many goes did you guys have at it?
S - Died twice to packs then one shotted the boss
A - I stopped counting after 2am
S - I did get a little upset when my account money ran out partway through the dungeon
A - Made victory that much more sweet...

So when Caedis said it was easy and he 1 shotted it...
S - Mages are liars.  Everyone knows that.
A - It was pretty much built for mages spellsteal and counterspells
S - They're just habitually bad people
A - That too
A - Well said

How would you feel next patch when you are always separated...
S - Oh, well, that'll be "totally" different to this patch
A - I don't see why we would get separated next patch
S - Only time we're in the same raid is in 25 mans :P
A - We bring different aspects to the raid since we're different specs 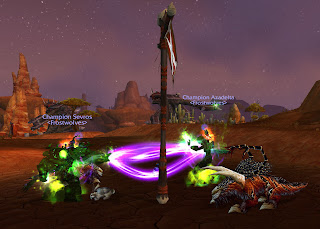 Ok so onto the simple standard questions now :) When did you start playing WoW?
S - About a month after release - I bought it on release day, internet went down and didn't go back up, I spent a very pissed off month waiting :P
S - Started on a rogue called Nathrak
A - Sometime during beta i started this warlock
S - He was ... awful
S - Once i finally figured thigns out I created Sev (about 5 months into WoW) and have been playing him as a main ever since
A - I dont' remember when, but I was around for the opening of diremaul and UBRS
A - And the first raids
A - I Remember getting Tier gear from UBRS and t2 from MC
S - Southshore vs Tarren Mill
A - Epic pvp
A - I also remember sl/sl lock pvp
A- 5v1 and still kicking
S - Wasn't that BC?
A - I remember it =p
A - Doesn't have to be vanilla silly =p
S - I refused to use SL/SL - I was born an afflock and I would die an afflock - and I did, a lot was I recall

OK, So how did you both end up in Frostwolves?
S - Well, I was a full time PVPer for most of vanilla, made a lot of friends and a full time pvp group.
S - With the introduction of x-sever battlegrounds taht fell to pieces, but a few of my friends fromt he group were in frotwolves, I figured what the hell and applied
A - I met Gley during a WSG, we were having a battle for the most kills, he invited me to join and rest is history!
S - Since then, they've almost all left, but there's still a few around :)
S - Incidentally, late props to Chymasitia's group from Khadgar, best Arathi Basin runners EVER!
A - Hell yeah!

So what do you like best about being here?
S - Friends.
A - Friends
A - People I've known for 7 years
S - I'm not so bothered with the levelling and gear these days, it's meeting up with everyone and chatting mostly ;)
A - The day they stop playing is the day I do

And what do you dislike the most about being here?
S - Hrm - raiding 4 nights a week cuts into other things I like to do
S - Was loving Skyrim, and it felt like a bit of a drag to stop playing and go to raid almost every other night
S - I need to break at some point I think
S - (After I finish the staff and get some use of it :P)
A - the nights where we don't have enough people to run what we really want to run
A - and doing other things, I feel as if I shoudl raid with the people I've known for 7 years over the people I go drinking with
S - Yeah there's a sense of obligation there - if you dot' show for a single night your'e letting people down
S - I kinda miss pvping with Nav and Az in arenas, but at the moment we're just not doing well at it 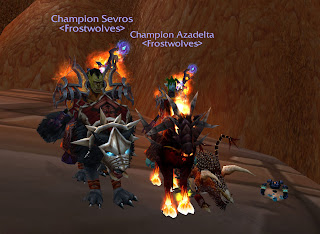 Favourite mount and pet?
S - Oh, black war wolf (since late vanilla!) and Felpuppy
S - Unless by pet you mean my Wolpertinger
A - My dreadsteed will always hold a special place for me
A - My first epic mount, completing the quest was a big achivement back in the day
S - Sadly it looks more like a dead pony with my orc
S - Dreadpony that is
A - My favourite pet would be kupyap, its not a non-combat pet, but u never said it had to be!
A - But vanity pet would have to be Pebble, cutest rock thing ever.

And are you guys looking foward to MOP?
S - Sorta, the new talent trees make me a bit nervous though, I like putting a lot of time into picking specific talents and customisng my character... I konw why they've changed it but I dont' like it much.
A - Pandamonium!
S - And my wolpertinger will OWN pebble and the Hyacinth Macaw
A - New content is always good, new lock changes look very awesome
A - New resource for destruction, looks very interesting and fun!

Conversation deteriorated after that, going off topic, talking about air versus grass types, and air versus rock types and pokemon moves...

Thanks boys for the interview!  Wish everyone was that chummy with their class rivals!
Email Post
Labels: guildie guest spot warlock