This week's guildie is Roshii, a relatively new guildie who has rapidly risen to the rank of top 3 dps as well as a stellar raid attendance. Now he is our only raiding rogue.  So, this week I set to find out where did he come from and how did he end up in our little guild. 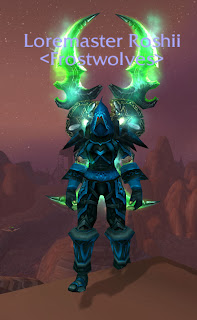 When did you start playing WoW?

Just before BC on Proudmoore, as Alliance.  At the start, I was just trying to learn the game, and then I started raiding in BC. I started in a pretty average guild, and I kinda noticed my skill level was higher than everybody else’s so I applied for one of the hardcore guilds on the server and I got in. It wasn’t a “Server Firsts” guild but it was one of the top 6. Serenity. They raided the same as our guild, 4 days a week.

Was it hard to leave all your friends there?
I didn’t really have friends there, they were too much focussed on the raids, it wasn’t really social like this guild, I like how Frostwolves is social.

2 weeks before Wrath, we stopped raiding and then I levelled my hunter (that was my main at the time) to level 80 and we cleared half of Naxx in our T6 gear, and then my friends wanted me to jump into their guild so I decided to make an alt, to raid with them, which was my rogue. I really enjoyed playing with my friends a lot more, so I told my other guild that I was going to stop raiding, and raid with my friends. So that was a little fun 10 man guild with my closest friends. We spent a couple of months doing Naxx and everyone got tired of it so me and my priest friend (who I’m always talking about) transferred to Nagrand, horde side. We were playing for a while and getting used to the horde side of things, and the raiding thing was still only Naxx and we got very tired of Naxx so we decided to take a huge break till ICC came out, so we took a pretty big break.


And then we joined a guild that was up to ... Sindragosa? And they were a pretty good guild, it was a 25 man guild, maybe an Asian guild? They raided pretty late. And so, because they raided so late, me and my friend couldn’t do it that’s why we stopped raiding again. I stayed on Nagrand and I joined Evil League of Evil which was one of the best guilds on the server, and when Cata came out, I wasn’t really playing the first couple of weeks and their raid teams were full and there wasn’t a spot for me in the raid and that’s when I decided to transfer to Dath’remar. 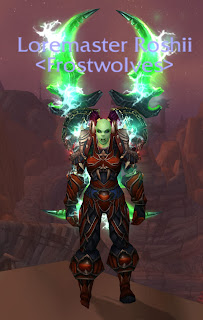 I dunno, I had a look at the servers and think it was the 2nd highest PVE rated oceanic (I’m pretty sure).  I was looking for a guild and I think one guild tried to pick me up I can’t remember their name, but I wasn’t too happy with the people in the guild, coz I did a pug with them and they just seemed like a bunch of nubs. I just sat around in trade looking for people who were recruiting. I didn’t want to join a guild that was so far progressed in the dungeons that I wouldn’t learn anything so that’s why I chose this guild.

Yeah, I dunno, I really like the people and all the other stuff that’s not raiding, that’s not involved in raiding, I really enjoy it.

So what do you like about this guild? Guess it would be that social stuff.

Yeah the social side of it and the people, the people are really nice, and I really enjoyed meeting you guys in Melbourne, that was fun.


Was only me and Aza though! What don’t you like about the guild?
Probably the fact that too many people get carried in our raids.

And favourite instance?
My favourite instance would have to be Black Temple. Umm, Illidan was a really fun boss when he was hard, we did it at current level, we spent a couple of weeks trying to kill it. We were one of the only guilds who killed Illidan before killing Archimonde in Mt Hyjal so that was pretty cool. 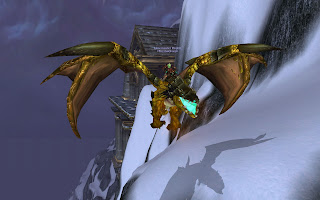 I don't need to ask you what your favourite mount is do I?
I really want the ICC drake mount which I don’t have – I want it. Ok, but my favourite is my Time Lost drake. I did a lot of research and found all the spawns where he flies out of the wall and I chose one and I sat there for almost 3 months, just sitting there in Storm peaks. I think there was about 3 TLPD kills before my one, so that was pretty annoying.

How do you know it spawned 3 times?
Because there were a lot of other people camping, we kind of made a little group and we’d report when we killed Vyragosa so none of us would waste time.

Bloody Vyragosa killers, I hate you all.
Yeah I think I killed her about 30 times.

So tell me about when you actually got it, what were you doing and where were you?
I was standing right next to the wall he flies out of, near Boer’s Breath, not the waterfall spawn, the onecloser to the little village and I as soon as I saw his head pop out of that wall and my NPCScan go off, I popped my killing spree and that was it. I felt so sick, I felt like I was going to vomit. I had butterflies in my stomach, I couldn’t believe that I’d killed it. 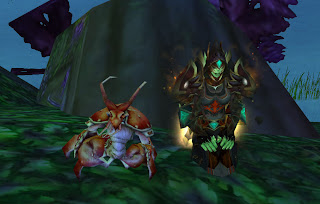 So what’s your favourite pet then?
Now? Would probably have to be my Emerald Whelpling.

But that’s your new pet! You just got that.
Ok, my all round favourite pet would have to be my Magical Crawdad. I love it. I dunno, I just like the way he looks.

So if your partner didn’t play WoW, would you play WoW?
That’s a tough one. Umm, I dunno how to answer it. I’d want someone who would accept me for who I was and what I enjoy doing, but if I was head over heels for this girl, I’d stop.

Are you sure you wouldn’t make her play WoW?
I’d try!

What if she was really bad at WoW? Like.. if she was like Wisper?
Ummm.. I don’t think I’d want her to raid with us.

Would you want her to keep playing WoW? Or too embarrassed?
It depends how far she got, if she got to the end game and wanted to raid with us I’d be pretty scared, but not all girls are bad at WoW, you’ve proven that. My 2 GMs back in Serenity were both girls. 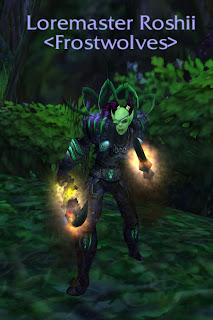 You gonna still be playing WoW in 2 or 3 years time?
I dunno, it’s a long way away, I wouldn’t be able to tell you that. It depends how much I enjoy the next expansion I guess, MOP to really tell you if I was really . If I enjoy it I wouldn’t stop playing I don’t think.

You love lore right? So out of WoW lore, what is your favourite battle, or story or character?
Yeah I love lore. Uh… my favourite character would have to be Illidan again.

/rolls eyes. So you like the sad “I love somebody who loves my brother blah blah”, and I’ll never have her, and I’m gonna carry around her little momento so that when people kill me they can carry around that momento and know how pathetic I am...
He did a lot for them and they didn’t appreciate it even though he got a bit greedy with power, I certainly enjoyed his lore.  Yeah I do [sic really like him]. He was actually meant to be… Illidan had, before his eyes got taken, had orange eyes which was a sign you were meant ot be a great druid. Yeah, I like Illidan.

Oh, I have to ask you about this. WHY do you hate driving Rhyolith? Every time you do it you have huge sulks and hissy fits.
I don’t hate it! I like it! I just hate how nobody else wants to drive it. And I feel like nobody listens, and then the bosses doesn’t turn and suddenly does a huge turn. It’s really frustrating and I hate how we’re still learning it. Hey how about you dps and then you can drive it Navi?