Mctacky is our resident Seasonal events expert.  Better known as Tacky, with a whole plethora of alts incorporating the Tacky name (Blutacky and Thumbtacky being the most amusing names), Tacky is one of the original Frosties who came across from Khadgar.  He has a whole forum thread dedicated to his seasonal events guides in our guild forums.

With Brewfest wrapping up for another sucessful year's appearance I have something to say. 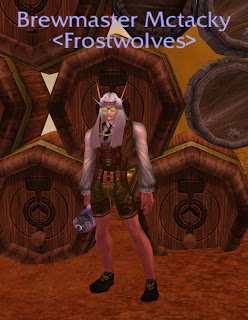 
I was into Seasonal Events before they sold out.

Before it became 'mainstream' Seasonal Events were the only change we had in the very static world of Classic World of Warcraft. This is what drew me to them. Those events that caused the largest change to the world were the ones I felt at the time were the best. And the event with the largest impact was Hallow's Eve.

Suddenly it was 3am on Khadgar Realm and across the world innkeepers could do something new. You could play trick or treat. Take an Orphan all over the world. You could use Hallow's End Pumpkin Treat and the whole 15 man raid of UBRS would be a costume party as we hilariously as Orange Giants, Skeletons, Pirates and Ghosts. Tanks were turned into useless bats with wands before a boss pull causing wipes. The novelty of these costumes translated a normal raid into a fun party environment.

When Harvest Festival, the World Event with one quest and tables of food came around we would have a party out the front of Orgrimmar eating the free food. It was pointless fun and the only ones there were people like me who were really into the Seasonal Events.

After a couple of years and after Burning Crusade came out, I heard there would be a new world event. Brewfest. Based off Oktoberfest. I thought to myself. "Well I'm sure it will be good. Some barrels of free booze out the front of Orgrimmar. It'll be no Hallow's Eve, but it'll be another Harvest Festival. But... Hey another party. Will be fun!"


I didn't know what would be coming. 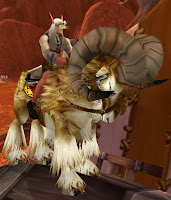 Brewfest arrived. It introduced a currency system that didn't use gold that could only be bought during the event. Oktoberfest Lederhosen with hats. A hidden boss inside Black Rock Depths. And we, as Horde, could get a Brewfest Ram.... if we collected 600 Brewfest Prize Tickets. That meant logging in every day during the event and running a ram around Orgrimmar within a time limit while yelling spam at other players and running up and down a road to ferry barrels in exchange for more tickets, hopping to get a better time as to get more Tickets towards that mount per day.

In the end I got those 600 Brewfest Prize Tickets. I unlocked the Ram Vendor. Then I found that it would cost GOLD to actually buy the mounts. All the tickets had done was unlock the vendor. I was devastated. I didn't have 100g and it was before Daily Quests existed.  I sadly bought the slow Brewfest Ram and left the Swift Brewfest Ram. I felt I had wasted those two weeks.

Then again I knew Hallow's End was coming back in a couple of weeks so I looked forward to that. 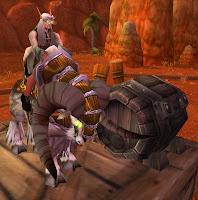 Hallow's End came... and it wasn't the same. People weren't collecting wands or buying Pumpkin Treats for costumes. Groups got together to kill the new Seasonal Boss, the Headless Horseman for loot. The mentality had changed. The Season was about what loot you could get, not about the other stuff. People didn't know or care about the Orphan Quest. It wasn't a holiday anymore. It was part of the grind that was the same as the rest of the game. There is a mob. It has epic rings. Kill mob for those rings.

For the next two years Seasonal Events would be empty. Brewfest even removed the Mount purchase and made it a drop off it's seasonal boss making the situation worse (but I still had the vendor unlocked and managed to buy the swift ram in 2008).

Burning Crusade changed two things. It changed the world and made it less static. Seasonal Events just didn't stand out anymore and were just opportunities to get more purples. 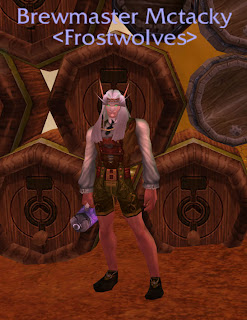 Achievements did two things. One good one bad in my opinion.. Good: People were participating in different aspects of the Seasonal Events again. Bad: The participation was a quantified amount of participation that ended the moment they got the achievement and they wouldn't return next year.

Partipation was up. Very up! But most of these new players seemed coerced into being there.. The type of person who would have stayed clear of the seasonal event were now grudgingly participating in the other aspects of the events.  With blinders on, do those achievements in the fastest possible time so you can get back to the grind/raid/pvp/whatever.

There is far more content nowadays in the events. Blizzard can't be blamed for expanding the events. Nowadays players running around making their own fun at the Seasonal Events sounds quaint in today's World of Warcraft.

"What did you do tonight?" someone hypothetically asks me.

"I spent 6 hours of dancing on the bank roof in Booty Bay dancing dressed as a Pirate." I'd answer.

"Six Hours?! That is unproductive! You should be working towards improving your achievement score/item level/pvp rank ect." they would tell me hypothetically.

I love Seasonal Events to this day. Hallow's Eve is the one I hold as my favorite. I look forward to seeing the new changes of course, but in the end it wasn't the decorations, the wands or the candy that makes it my fav. It was the people. The event gave us an excuse to party and we did.  This is why I treasure all these seasonal events. Being at a place and given the permission to say: This isn't a game. You have no goals. Just Have Fun.