A new short story on Sylvanas, how cool!  Here is the link here.

So a quick summary of the story: 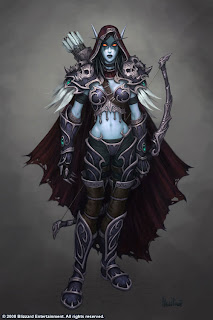 Sylvanas is in Icecrown, looking at the remains of Arthas, the Lich King.  A new Lich King now sits on the throne.  And she thinks she has now found peace, she can leave her denizens and this loathful existence.  Stepping off the cliff to end her undeath, she is held in limbo by the Val'kyr, who like her, were warriors in life, and warriors in undeath.  They open her eyes to the plight of the Forsaken.  That with revenge in her heart now sated and the bitter taste of emptiness in her mouth, that the hordes of undead that she used as pawns to achieve her goal were also viewed with contempt by the living Horde.
The Val'kyr ask her to bind them to her, so they can escape the Lich King's dominion.  So she can hold the power over life and death.  So she returns to the Gilean front, Val'kyr at her side, to embrace her people, no longer her puppets or tools, but her loyal subjects.


"I was once like you, Garrosh," she answered, her voice quiet and steady, loud enough only for the warchief to hear. "Those who served me were tools. Arrows in my quiver."

The army of undead that surrounded and protected the Dark Lady was still hers, body and soul. But they were no longer arrows in her quiver, not anymore. They were a bulwark against the infinite. They were to be used wisely, and no fool orc would squander them while she still walked the world of the living.

Sylvanas had found a new purpose.  She was the true Queen of the Forsaken, and the survival and protection of the Forsaken was her new goal, now that the Lich King torment of her soul was gone.  Hellscream, however, is wary and he will be everwatching.
Email Post
Labels: lore sylvanas