Stop! Think about what you're doing.  Is arcane magic really right for you?
The Dangers of Magic Abuse, page 1

It is with a heavy heart that I say goodbye to Xyn.  He has decided that he's going to stop playing WoW because he hasn't been enjoying the game lately.  A combination of frustrating raid nights plus sub par players just ruined his raiding experience, and I could see the disappointment building over some weeks now.
Facts: Magic is a dangerous force that leads to the deaths of millions each year.
The Dangers of Magic Abuse, page 2
I know that Xyn would have gotten more enjoyment out of the game (and us more time out of him too) if we had organised our raiding a bit differently.  I think we raid very fairly, we do our best to teach new people and we rotate good players to sit out for some not so good players.  However, not everyone agrees with this approach.
People who put their 100% in can often feel upset and angry someone who doesn't put the same effort in comes to raid.  We do have a few people in the guild who put a great effort into raiding, bringing flasks/food etc to raid so everyone can benefit.  And I know Xyn put in 100%, he was our cauldron bitch.  None of the other alchemists make cauldrons...

Facts: Arcane magic is highly addictive.  Once you start practising magic, it's almost impossible to stop.
The Dangers of Magic Abuse, page 2
There are a few people who think that perhaps he made his decision hastily.  However, I know Xyn and it was not made in haste.  If he had a lousy day raiding, he would be cranky and he would need some wind down time before he could go to bed and Mrs Xyn didn't like angry Mr Xyn coming to bed.  Which is fair enough, right?  Also, Xyn knows how susceptible he is to the addictive component of the game - you can't just wind down your playing, you have to stop.  I know this because I am extremely susceptible to those addictive components - achievements, time wasting screenshotting etc.  So that is also why he has decided he has to stop.  And then he can get back into his real life stuff again. 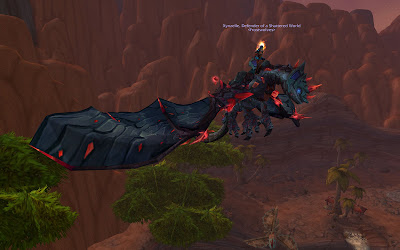 I wonder would he have been happier had he been in another guild, a stricter one, one that played to the best of their ability?  Maybe, from a raiding perspective.  I'm not sure what kind of friendships he would have had in that sort of guild, but here in Frostwolves he had a lot of friends, and a lot of respect (and a lot of teasing as well) and though he may feel that he may have had the same experience if not better, somewhere else, but I'm glad he came here because I enjoyed his company, his counsel and his friendship for the time he played WoW, and he certainly enriched my gaming experience.
Our mission is to show the world that it's okay to live without magic. You can find fun elsewhere, like with flowers or basketweaving. Doesn't that sound exciting?
The Dangers of Magic Abuse, page 3
Of course there is always emails and things where you can keep in touch, but for someone who wants to forget the game, is it wise to be contacting them?  From my point of view,﻿ I try not to talk about WoW for those who are trying to stop playing, so fortunately I have the children thing that I can chat to him about if I feel the urge to communicate.
So dear Mr Xyn, farewell!  Pursue those noble pursuits!  If you decide to return, you know where to find us.  Well, me anyway.  I don't think I am giving up any time soon.  I'm still embracing my addiction.

Contemporary Azeroth is full of unique challenges that make it very difficult to maintain a safe and magic-free lifestyle. We're here to help you find that safe, comfortable path. Dozens of people have already benefited from our lifestyle enriching magic-alternatives. Won't you be the next?
The Dangers of Magic Abuse, page 5
Email Post
Labels: guildies