Vyragosa is the last Rare that I need for my Frostbitten achievement.  However, I have yet to see her alive.  I have seen only seen her dead.


The main problem for Vyragosa seekers like me is that she shares a spawn timer with the highly desired Time-Lost Proto Drake, in fact I have seen it written in many places that "Time-Lost Proto-Drake is a rare spawn of Vyragosa" making TLPD a rare spawn of a rare spawn.  Is that rare enough for you?  TLPD has a 100% chance to drop Reins of the Time-Lost Proto-Drake.
A number of sources say that the spawn time for Vyragosa is between 6 hours and 24 hours.  So I should pop in every hour looking for a spawn I guess!  Geez, if that doesn't hike up my /played I don't know what will!
Draewind has a great page about Vyragosa and TLPD.  If you look at the spawn paths on Wowhead and with NPCScan it looks like a windy mess, but Drae has actually made a nice map with paths, directions and spawn points.

They both are not hard to kill, but they are hard to pull.  They are too high off the ground to be shot at or cast at, so either you have to grab them mid air and then fall slowly or agro them by flying into them and then going to somewhere you can dismount to fight.

There is only one person in the guild I know of who has TLPD - Roshii.  Here he is on that elusive mount. 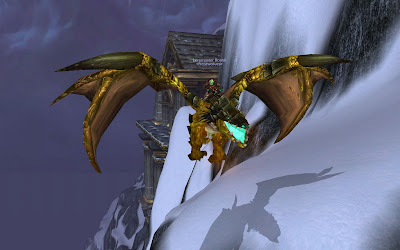