Well now that we have done a few more bosses I can make a few more comments about trash pulls.

Rhyolith trash is a gauntlet.  Easiest thing to do is get on your bike and run all the way up following the tank and hope he picks up all the Fire elementals before they start taking someone else out.  And they are like the fire elementals in MC - they start multiplying if you don't kill them quickly!  So AOE them all down.  Then you've got Kaz the Everburning - who is a wuss and runs away and hides when you approach him.  Healing with the volcanoes popping up all over the place is annoying, not much else you can do except just heal through it.  And run your adds to the tank! 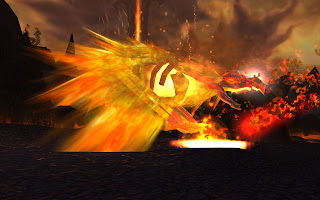 Alysrazor trash is the fun one.  Try not to run in all together or the Monstrosties make you all go splat.  The dps who are going to ride the Monstrosities should ride in ASAP and jump up while the tank picks up the druids casters and once mounted, start shooting egg piles (Don't shoot the hatchlings in the raid coz you kill friendlies as well!).  To mount you have to aim at their back, where you would ordinarily be riding it (the things are huge, and you don't get the mounting icon to click unless you put it near the top of the bird).  Kill the casters, aoe down the little hatchlings and then you can start taking out the Monstrosities.  In fact you can have fun and shoot each other's monstrosities for a while to make it easier.
Baleroc trash consists of 2 packs of 2 Flame Archons and 2 Molten Flamefathers (in 10 man).  Fortunately you can pull them separately.  So you pull the Flame guys and make sure they're not facing the raid or you you'll have a good Horde BBQ going.  We use two tanks for this, and have them a little bit apart so everyone doesn't get that whirlwind and then burn them down. They can't be CC'd and if you wipe while doing and you kill one, it will be up again when you come back.  But hey at least they give rep!  Molten Flamefathers make volcanoes which spawn little elementals which blow up knocking you all over the damn place.  Usually one of the melee will take care of the volcano while the others kill the little elementals.  I like Baleroc trash, because of the rep!