I know I work hard at my achievements but I think Ayelena works harder (or is more lucky?  I think he works harder coz you can't always be lucky!)

He started doing Bloody Rare and Frostbitten and got it done within a week!  In fact he managed to complete them on the same day, one in the morning, the other in the afternoon.  It was cool because for a while me and Ayelena were grouping up to do a couple of rares but after a while we didn't have the same ones anymore.  I even gave him my number so I could call him early in the morning if I saw a rare he didn't have (which I did once - Dirkee - and he called me for Loque).  Ayel is nice like that. 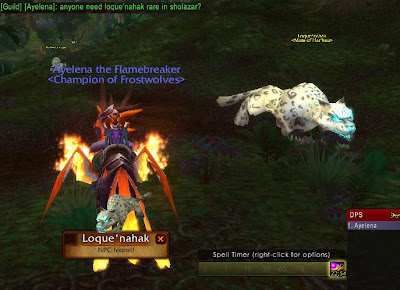 Yesterday he also got Old Ironjaw.  And I remember he had all the Argent Tournament mounts and pets before I did, and he had his Molten Front ones done before me also.  And he also had a lot of reputation stuff done also!

So I'd better watch my back... number one spot in achievements is not safe with Ayelena and Azadelta around. Sneaky warlocks!
Email Post
Labels: Achievements guildies