A shame we were 3 short of a 25 man!  We unfortunately had to sit a lot of disappointed people out and we took 10 of us to go for our first jaunt into SS.

Now why don't they have strats for trash!  It took us ages to figure out some of the trash mobs!  Here are some in particular that when we finally figured out we were like.. phew!


Cinderweb Spinner + a cinderweb drone + a whole bunch of Hell hounds
Well these hurt.  It took us a while to figure out to CC the hounds and not the spinner!  Once we got that done, it was a cakewalk.  Roots, banish, sap all work nicely.


Cinderweb Spinner + drone, Cinderweb Spiderlings, Flamewalker Cauterizer + 2 Sentinels
Ok this mob was impossible.  The buff on them would not reset and so after one pull they were one shotting.  We had to give up here.  Hopefully that's fixed or reset tomorrow.
Edit: ok we did this with 25 and fears and cc worked, though it was right before a reset... we almost got it down too before the instance went down!  So here's hoping they fixed it.


Turtle groups
Woot we got punted all over the place!  So make sure you don't get punted into another trash mob.  The big one also puts on a reflecting shield so don't dps it when the shield is up!  The little ones spin around so get the hell out of their way.  It's stunnable, but these beasts are not cc'able.


Flamewalker Overseer
After the tank was 2 shot, we figured out you all stand together to share the AOE cleave.  Aaaah much better!


?I can't remember the name of these mobs, but there were 4 channelers on an elemental and a big melee mob
This was at least easy.  The big mob was tanked, and there were fire bubbles on the 4 channelers which dropped off one at a time, dps the one that the bubble dropped off and then back on the big one, until all 4 are dead, at which point the elemental comes out and does some AOE fire farts which knock you down but as long as the two are separated it goes down pretty easily.


Ancient Core Hounds
You get core leather from them when skinned!  They still fear. And they pick someone up in their mouth and eat them!


Scorpion groups
The small ones die and put some strange debuff on the ground which on it's own didn't seem to hurt, but I think it made you take 10% more dmg with each stack.  It looks like my efflorescence.  It might be actually when they explode they give you the debuff.

So we didn't get to see any bosses today but we got one trash drop and about 1k rep (maybe).  Let's hope that tomorrow is better now that we have the hang of it.

Actually that's not entirely accurate.  I did see the boss.  We didn't engage the boss... 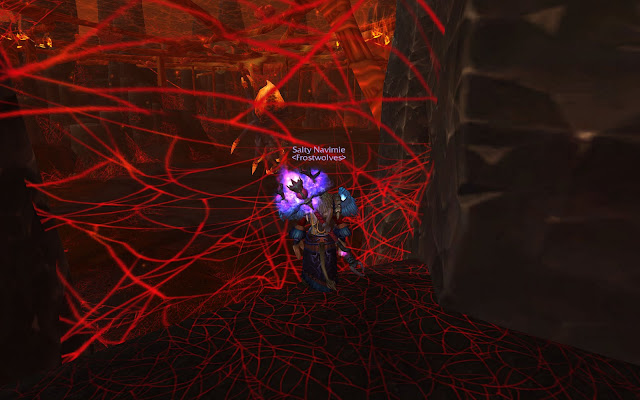