Buzzing around the internet today is the topic of the release date of Warlords of Draenor, after seeing this: 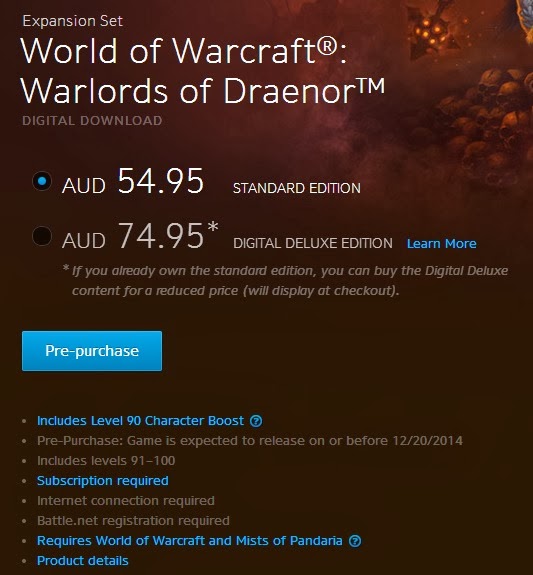 On first look, you see the release date of "on or beore 20 December 2014".  Holy what the!  That's like 9 months away! What the hell are we going to do for 9 months, is what I was thinking. Surely Garrosh will be dead by then on heroic.  And then what?  People are going to unsub till new stuff comes out (unless of course you PvP as Arena seasons will continue) which will kill off raiding- that is if anyone can be bothered. But it makes me wonder what I will be doing, 6 months from now.  I guess I'll find out in 6 months!

Adam Holinsky says that he thinks it will be earlier than that - but I'm not so sure.  I guess though, at least Blizz is saying that it won't be any later than that, but it could be earlier, which at least gives you some reprieve from the fear of recurrent delay of release.

So I went out and got my Deluxe Digital edition just now.  Can't wait to get home and have a look at my new pet and mount.  A stark reminder of how lazy I am when it comes to getting Anzu - which I still haven't been bothered to go back and get.
Email Post
Labels: Warlords of Draenor