About The Daily Frostwolf - Druid Edition

TDF - Druid edition is a blog about the guild Frostwolves-Dath'remar Saurfang in World of Warcraft, with a personal slant (ie me! hence the druid edition).  It provides an outlet for the daily dramas and excitements that come with playing World of Warcraft, raiding, PVP, achievements, interpersonal relationships, pets, druid related things (gear, specs) and healing of course.

Hello readers!  I'm Navimie, a tauren druid on Saurfang (formerly from Dath'remar and before that from Khadgar).  Frostwolves started as Frostwolf on Khadgar, and due to difficulty filling our raids and recruiting, we made a huge decision and moved our whole guild to Dath'remar.  Khadgar is a US server, on US server time, and we moved to Dath'Remar which is on Oceanic time (server time is same as East Coast Australia). Heaps more Aussies on Dath which made recruitment and raiding times easy. 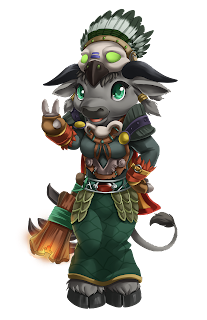 I've played my druid since Vanilla (2005), and have been resto since BC.  I was the feral/resto spec during vanilla (in the days before tree form) and did the occasional tanking in simple instances like Karazhan but since then I have loved healing so much that I don't do anything much these days except heal.

I am an officer in Frostwolves, dealing mostly with healing (haha what else!).  I've been in Frosties since 2006, and haven't looked back.

I also like to PVP and arena - and with Cataclysm there were such clear divisions between certain specs that, while I used to at least have a DPS spec (boomkin) to use as the backfiller if we had too many healers, I had to eventually give that away if I wanted to arena properly.

I have extreme difficulty levelling alts.  In fact it's so bad that I only have one level 90.  My next alt is in her 70s.  So I spend a lot of time investing in achievements, pets, mounts... all that crazy stuff people laugh at.  At the moment I am totally in love with pet battles.  I'm got my 400 unique pets achievement and I'm still gunning for more.

I love my guild - a lot of my guildies have gone from being guildies to RL friends.  We have guild get togethers every now and then and though we aren't quite calling each other in vent on a first name basis, we do have each other's mobile numbers and contact details.

Want to drop me a line to tell me how much you like me or how much I suck?  You can email me here.
Email Post
Follow @USERNAME