The moment had come - I was going to meet my blog buddies pixel to pixel!  Karazhan was JD's entree to his main course of ICC tonight, and he was doing that Horde side so I could come.  ICC was an Alliance affair and I was pleased that I got to have a slice of JD's farewell cake!  After all, what better way to do your last day in WoW than with friends you never met, right? :D

I had no idea who was coming - I knew that JD (on Saintvache), Ancient (on Sasche), and Effraeti (on Vaadaree)  would be there.  But when I turned up, I was pleasantly surprised to see more familiar and very welcome faces!

First up, I was thrilled to see Euphyley!  I thought she had all Alliance toons from memory, and I had commented as such on her blog:

... I know you can't Ironstevo but how about another alt?

If I had read her reply I would have known she had this warrior lying around - and not a shred of pink in sight!  Or any pet flamingos!

Oh I'll be there!!! I absolutely LOVE Kara! <3 I'm going to bring the first toon I ever made - the original undead Euphyley, who is still conveniently stuck at level 70. The last time I played her I was tanking Kara for my guild at the time. That place brings back some amazing memories. ^-^
- Euphyley

So that was awesome and Euphy was really excited to be there - she really DID seem to love Kara! 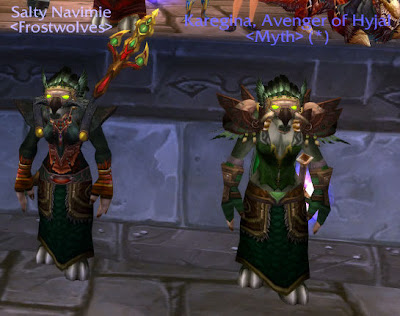 My second surprise was Karegina, author of the Reluctant Raider.  Firstly not only is she a classy tauren, but she had some excellent mog gear choices!  I felt like I was looking at my twin!  I felt like I was copying HER actually, since I had only just mogged this last night.  I was honoured, and blown away!  Imitation is the best form of flattery is it not?  I certainly hope she thought I was flattering her :) 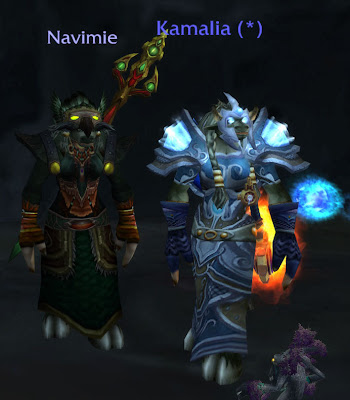 And my third surprise (and I was so thrilled I actually let out a yelp IRL) was to see Kamalia.  I didn't know she was coming!  But now I felt like it was a cowfest as JD's Mooadin Saintvache was running the show :)  5 Taurens!  4 of which were female :) 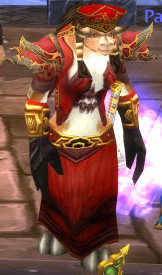 And this (left) was Kaylira, from Blog of the Treant,  whose transmog was my favourite in Round 1 of Mog Madness (As well as being the winner with the highest score for Round 1). It was a genuine pleasure to meet her!  Anybody who plays a druid healer must be cool - but I realised who she was after I saw the outfit.  Some mogs just stick in your head.

A few I didn't know but recognised the names from JD's blog - one was Jai, of  Glyph of Jai, who was playing their hunter, Earthrose.  Paliclaus was someone else I didn't know (but judging from the guild name, it was a guildie - though from what I could gather, it wasn't Mrs Amateur) and I didn't get the chance to introduce myself.

So here we were getting ready to start the night.  Or rather, morning for me. 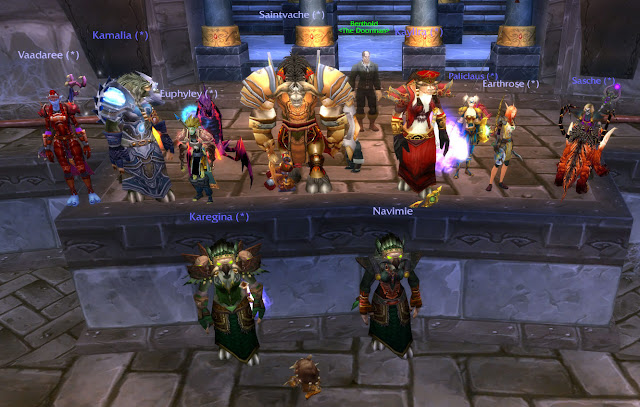 And almost right on the dot at 10am Sydney time (1 hour later), here was us at the end of the night.

With the exception of Nightbane, almost every boss died in less than 15 seconds.  Or so it felt.  I think Shade of Aran may have lasted a whole 3 seconds.  The fights were so quick I only frapsed a few, so I think I might be able to make a 30 second video of JD's last night.  When I get the time :) 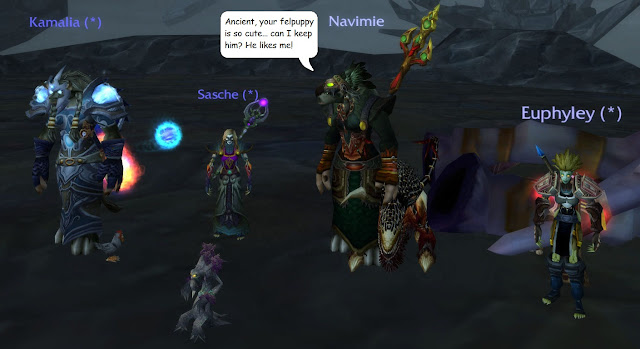 So that was fun, and Ancient was very shy and quiet, so I made her stand with me and take more pics.  I like this picture the best because it looks like her fel puppy is cuddling up to me and I've got a firm grip on its horns.  At least she didn't have to worry about stuffing anything up - nothing was alive long enough to really stuff up on!  The only close moment we had was Euphy got exploded on and went to 75% health - I was thinking gosh, if she died, how bad would I feel!