Noobs CAN get Gold Challenge mode (and my Resto Druid tips)

Those last two challenge modes I needed have been a little bit tricky.  I got constant interruptions from a midnight waking child, who wants to lie down and cuddle mummy till he goes back to sleep. We had people needing to leave and some bad pulls.  But on Sunday night I got lucky! 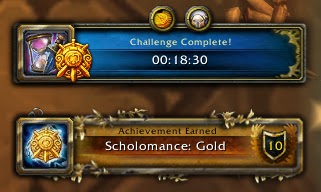 First up was Scholomance, and this time it went down nicely.  And lots of time too.  Then it was onto what I dreaded - Stormstout Brewery.  It's the last boss which gives me the poops in there - stand a little bit wrong, the boss heals and BAM!  Bad! Bye bye gold.  One of the previous times we were a few seconds over. That was depressing!  But this time we got it.  Riptyde pugged a warrior from OQ, and he was quite good. Potatostrike.  He was a heroic raider and he was chatty in the helpful way, saying that he would do certain cooldowns and he'd call out when he was doing them and in general, really pleasant to group with.  He got on Rip's friends list and he was good DPS as well.  So, it was wonderful to get Brewery down! 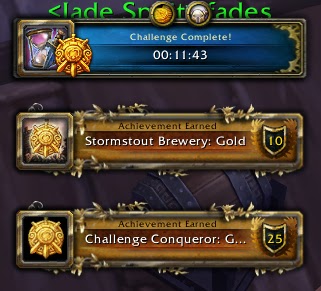 Oh my god!  I did it!  I got carried all the way to 9/9 CHALLENGE MODE GOLD!  So I got myself a lovely Golden chest of the cycle... which I wish I hadn't opened because where am I going to put all that stuff??  And I wasn't going to wear it because I already have so many transmog sets... but somehow I squeezed in some room.  So here I am, sporting my Gold set.  It does look pretty sweet, but I think there are a lot of people wearing it, so I don't really want to use it. 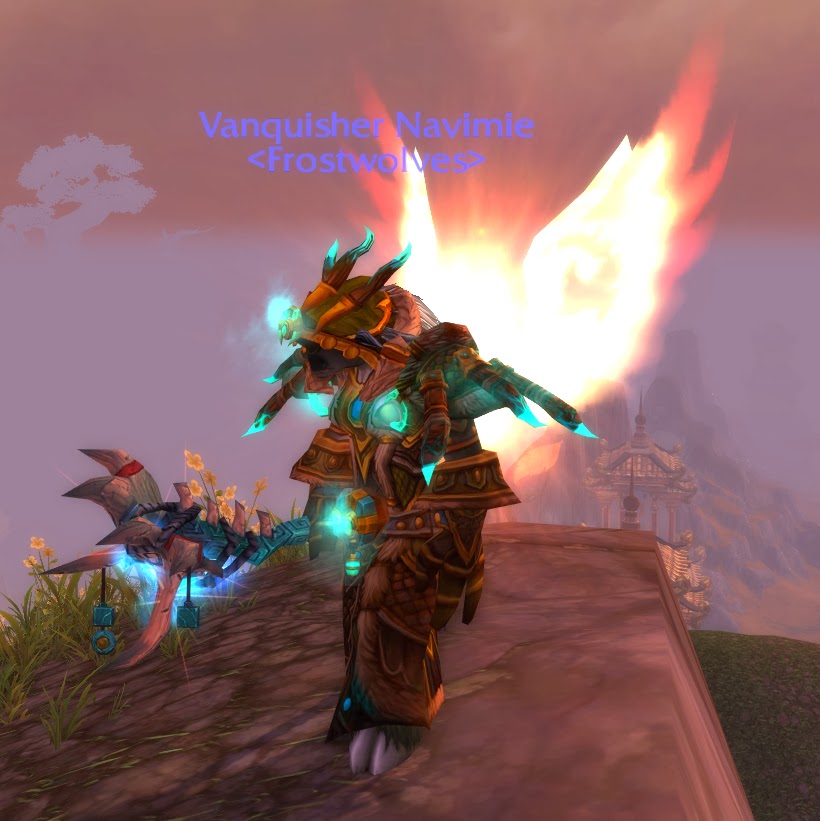 Big thanks to Concur's Riptyde, Nova and Jurlok for taking me to so many Challenge Modes.  Now, to help the rest of my CMN buddies get their's...

Thunderspank wrote a nice post about what you need for Challenge Modes.  I can only comment about a healing point of view, now having completed gold, and as a druid. So here's a resto druid's guide on Challenge Modes and

1. Invisibility Potions
If you want Golds, you need these.  Hell, if you want silvers, you need these too.  If you're an alchemist, they are a good way to make gold, because they sell for TONS on the Auction House (coz the market knows those Challenge mode people will be buying them).  On my server they're 39g each.

2. Food and Water and Flasks
Everyone talks about Restorative Amber (which you buy from the Klaxxi quartermaster for 7g EACH). I'm a bit of a cheapass - 7g a pop for mana?? Really? The cheaper option is mage food which I just eat every time I'm out of combat (make sure you hot the tank up first) then displacer/sprint catch up - even if it's just for 5 seconds, it does help that little bit. Perhaps it's because I arena - ANY opportunity I get to drink, I drink!  So I'm used to sips of water everywhere.  If that fails, then any high level drink (I use Cobo Cola or Golden Carp Consomme as these are just drinks and don't muck up my other food buffs, and they are only 2g50s for 5) is ok. Drink often and whenever you can!  To tell you the truth I never used Restorative Amber in any of my CMs whilst I was getting to gold, and bought it after I got my golds to give it a try.  I think I'm just lazy and don't like clicking it off (as I accidentally clicked off my soulstone when trying to get rid of the amber).  I could make a macro I suppose... but Restorative Amber IS a good way to get mana back.

I used a 1000 Spi flask because I worried about mana.  You should always flask and eat good food.  Those cheapass Concur guys would sometimes pull out a 250stat food cart but I think you should eat at least a 275 food - carts are a bit expensive to make IMO, so I would rather get Great Pandaren Feasts - probably because I have tons of those that I don't use from Nomi and now I have a good excuse to use them.

Thunderspank used intellect pots. I never did. I would be too scared to stuff up my invisibility pot timer! Also I couldn't be bothered making/buying them because I am so no-frills and cheap.

3. Talent choices
These are personal choices.  But I think the 1st tier talent you should take Displacer beast to get you out of tricky spots and run from agro and bad stuff on the ground.
I prefer Cenarion Ward to Ysera's gift because I like being able to control where the heal goes (ie on the tank) rather than healing some other DPS who will get healed from my Wild growth ticks anyway whilst I concentrate on my one target getting all the damage.  But other people think differently.
Typhoon is the most useful for me here - it's great for blowing Hoplings away from you in Stormstout Brewery, and also for pushing mobs around in Siege of Niuzao (pushing them towards the shield for bombs, or getting them out of their little bubbles)
I prefer Soul of the Forest but Incarnation has it's place if there is a spot where you need big bursty heals - like in Shadopan Monastery during the Sha.
If they are needing stuns, like in Mogu'shan Palace, I like to take Bash or Disorientating Roar.  I prefer Roar because that Bash misses coz I'm not hit capped.  I use Ursol's Vortex in Stormstout Brewery or in Siege of Niuzao for adds though.
I think that you definitely need to take Heart of the Wild here.  Your DPS could make the difference in those bosses for the timer!
In terms of glyphs, I take my favourites - Regrowth and Efflorescence - but I waver between Rebirth and Healing Touch.  I have started using the Glyph of Healing Touch and consciously using Healing Touch to get my Nature's swiftness cooldown to reduce so I can have another free heal.  But a full health Rebirth is awesome for CMs. The only no-no glyph is Wild Growth since you don't need to hit a 6th person because pets don't need heals, really!

4. Buffs
If I don't have a spell haste buff I get very upset.  IMO I think bloodlust and spell haste are really important. Melee seem to have their own buffs and I don't really care about those but I do like having hunters, ele shamans, and mages.  I've never done a CM with a shadow priest but I'm sure they would be good too. Shamans are my fave because I like symbiosing them to get Spiritwalker's Grace for Tranquility, but mages are good for iceblock too when I get healer agro.

5. Other druid things
Free heals are good heals - move your mushroom because it costs no mana and someone will get some trickling small heals!  And don't skimp on your Nature's swiftness + a big heal, coz not only is it free, it's a good way to top up people.  And don't forget to use EVERY Omen of Clarity Proc - MORE FREE HEALS YAY!  The only contradiction to my MOAR free heals is that I don't take Ysera's gift.

Good luck in your Challenge Modes!  Even if you don't get gold, they're still fun to do as an achievement :D
Email Post
Labels: Achievements challenge modes Druid resto