I had an early start to the day - Pel told us to line up early so off went Lushnek and I at 5am to line up.  She and Xar had been there since 430am! There were still heaps of people lining up though.

The line soon turned into a swarm.  Heaps of cosplayers and costume contests entrants were walking up and down the line, posing for pictures.  You can see my pics of them here.

Guess who was standing next to me in the line later!  FIMLYS and RILANDUNE and ZABINE!  I of course took a picture with them (unfortunately, no real life pics of people will be on blog - I shall edit them later for your amusement!).  Hard to recognise Fimlys without his googly eyes!

It wasn't long before the throng of people was backed up waaaaay back.  They opened the doors at 930 or so, and we proceeded to bag check. 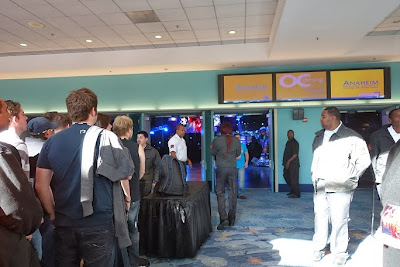 You could see Blizzcon on the other side of the doors!  It was so exciting! Once we got through, however, people were RUNNING towards the main stage, and so of course I started running too!  It was scary though - it was dark, and there were so many people running, and bumping me as they ran past, that I was worried about being trampled!  Luckily that didn't happen and we found ourselves a seat in the main hall, with some view of the main stage.  The hall had big TV screens so you didn't miss much even if you sat in the back and sides though.  The capacity was MASSIVE. 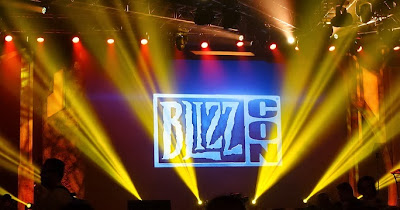 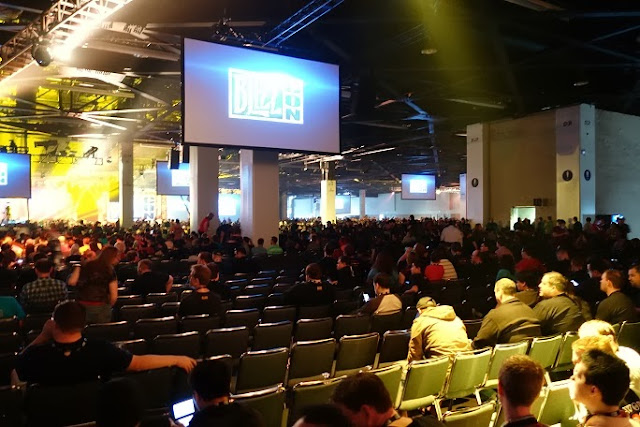 Mike Morhaime, CEO of Blizz, took the stage and made some announcements, a big welcome, and made us feel like us gamers were a really important part of the game itself.  He looked kinda nervous!

Dustin Browder then came and talked about Heroes of the Storm, the Blizzard All-stars game, and showed an awesome trailer of the game cinematic as well as some gameplay!  There were demo machines with Heroes of the storm here at Blizzcon for us to play!


Rob Pardo came to the stage, and talked about Hearthstone.  He talked about the surprising success of the game, despite some scepticism from within the company.  Personally, I am still not that excited about it because I didn't get a beta key, but he said we'll be getting open beta soon!  AND that it will be coming to iPad, iPhone and Android!

Chris Metzen then took to the stage, and talked in his orc voice for what seemed to be his entire speech!  He announced the expansion was going to be Warlords of Draenor and we got to see the cinematic trailer, AND we could play it here at Blizzcon! LOL, he looked really PUMPED talking about the WoW expansion!


The lines at the Blizzcon Store were insane!  Wished I had lined up and gotten the boys to mind our seats back at the main stage so I could check out the store since we sat there for 1.5 hours waiting for it to start.  And these pics were the back of the line, there was the queue in front of the entire store still as well!

The consoles where we could play were amazing - row upon row of computers for each game for us to play.

Various statues decorated the halls - here are some when it was LESS crowded. 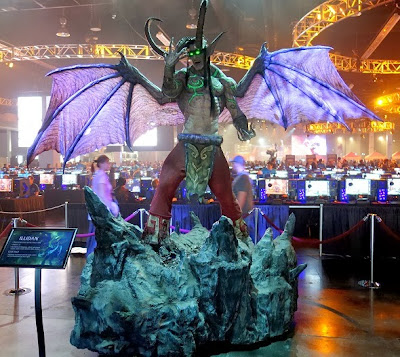 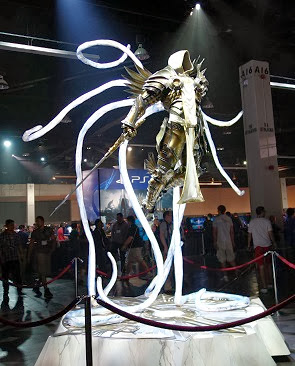 I spent a lot of my time watching arena tournaments.  Skill Capped, which had Sodah, Talbador and Chanimal in it, were the team that I was cheering for- Chanimal was Australian!  Here are some pics of the first arena match of the day, which was MiR (#1 ranked EU team) vs The Last Battle (#1 ranked China team).

I then watched Skill Capped smash MiR 3-0, and then I missed watching Skill Capped vs Flash Wolves (Taiwan's #1 ranked team) but they were also totally smashed!

I went to the meeting stone and met Doobjanka, who was taking names for the pet giveaway, but I didn't want him to think I had turned up for a pet giveaway, so I shook his hand to tell him what a great site he had and then did some pet talk with some other pet enthusiasts about the Celestial Tournament.  Doobjanka said that he actually followed Quintessance's lineup but I think she has some hard to get pets in her lineup! 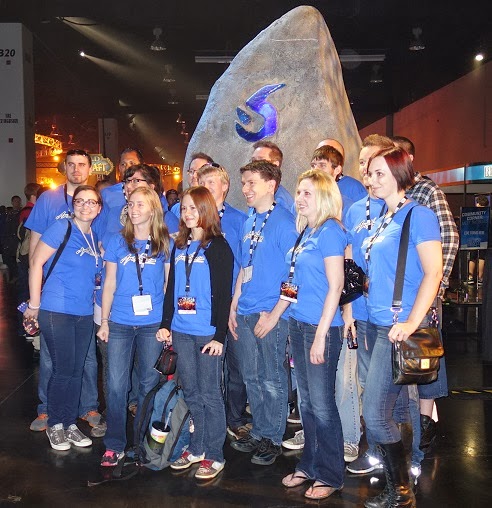 I went back for more arena and then some Starcraft WCS which was amazing to watch before I headed back to the stone to meet Apotheosis.  I saw Serrine, Tikari, Jasyla and Kaleri and it was really lovely to meet them in real life!  Their guild turned up in huge numbers, and I told Jas that I was sad she was now playing her hunter as main, and she told me that 25 man druid healing is rather bleh, because it's just aoe heal aoe heal aoe heal, but her hunter has really made the game exciting for her again.  Can't blame her for that! She takes her druid for alt 10s and she says she finds that much more enjoyable.  Serrine gave me the biggest hug, and Kaleri was my size!  I had to laugh about that because I know she plays a bear tank!

I also managed to catch up with Elfindale, whom I was tweeting trying to find, only to find she was just 2m away from me leaning on the other wall!  She said she was enjoying Blizzcon and poor Elfi had to listen to me talking at top speed as my excitement from meeting her kicked in!

Mataoka also came to see me and give me a big hug!  She turned up late for Blizzcon but she came in to say hi to me and we talked and she was even more bubbly in real life, and so excited that now I have met her, whenever she gushes at me online for stuff, I can actually imagine it!  Arv was there, and he was happy to meet Matty and I introduced her to Hyad and Lushnek and then we had to go and do more Starcraft watching.

That evening, I attended the contests, and had an awful seat, so I couldn't take any pictures of the costume contestants.  Here's a pic of the winners!

I had dinner with Xar and Pel at the Hilton, and then after that I headed over the Bowlmar Lanes at the Anaheim Garden walk to meet up with everyone at the Twisted Nether Blogcast Party.  I had a great time there, chatting to everyone!  I walked in a little dazed and Fimlys was waving frantically to me but I was in zombie land or something, and took me ages to head over to the party area LOL!  He told me I had just missed Beruthiel, and she was bummed that we'd missed each other.  I was bummed too!  However, it was made better because I walked in and was about to talk to Hasteur, when I bumped into someone and I didn't know who it was.  I said hello and introduced myself and she squealed "Navimie!" at me and gave me a hug and I said "Hi!  I'm sorry but I don't know who you are!" because her badge had her real name but not her toon name.  She laughed and turned it around, showing her TNB badge.  It was HYDRA!  I gave her another big hug and I started chatting at 100km an hour as Ril came along and I was telling her how impressed I was she got my name right when we met in person! Zabine gave me my epic loot bags and I won a T-shirt!

Hasteur had realised I had arrived so he was waiting patiently for me to stop talking, and I quickly turned to him and hugged him and chatted about how I had missed talking to him at the World of Podcasts thing.  I went to buy him a drink where we waited for AAAAGES before someone noticed us.  I introduced myself to Nevik of Shattered Soulstone, whom I said was awesome because he has an N and a V and an I in his avatar.  LOL, I'm such a dork, he probably thought so too!

Rho turned up too, and we chatted a little, and then Shawndra and I talked for a long time and she introduced me to one of the Jenny's that she brought with her :)  Vidyala also made an appearance and we chatted and then I let her talk to her fans, as I snuck off to shake Vosskah's hand, and ran into Kaleri AGAIN!  We laughed because in game I have never been able to catch her for a picture because she goes to bed so quickly after raid, but here in one day I had seen her TWICE!

As I went to the bar to say some goodbyes, I ran into Jed who knew who I was because apparently I was the only one who replied to his Blizzcon schedule post!  We had a laugh about our own pageviews, and then I headed out.

I fished up some courage to go and shake Medros' (All things Azeroth podcast) hand and introduce myself, but I felt a bit silly as he wouldn't know who I was, though he politely said he did.  As soon as he put his red hat on, I realised who he was.

As I walked out I checked my Twitter and found that Khuruuk was on his way so I said I would wait for him.  We chatted back and forth on twitter as I tried to find him. 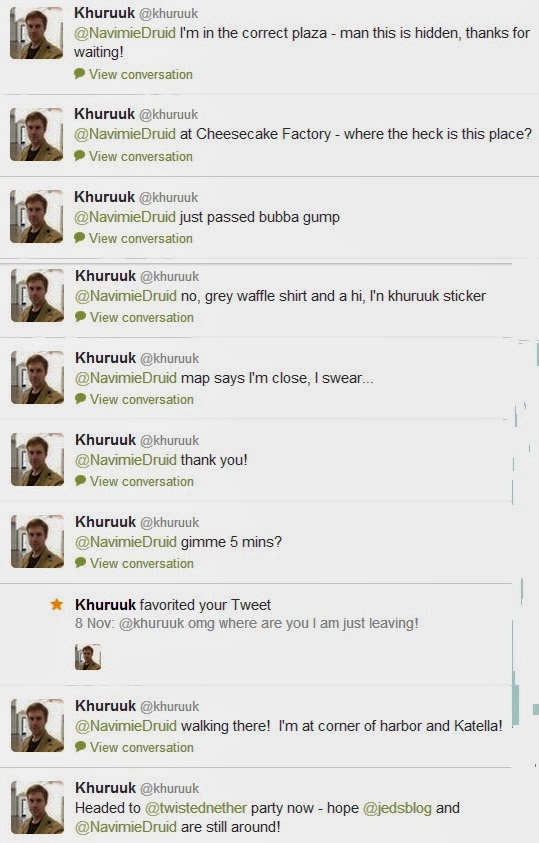 He had two of his guildies with him (Lush was with me being the photographer!) and we chatted about realm transfers for raiding, PvP, Blizzcon and I asked him about what it was like now, being in the biggest Alliance guild in the world (Covert to Raid).

It was a really good evening, a fantastic end to an awesome day.  Blizzcon was even better in real life that I thought it was going to be!