It feels like we're all fired up and ready to go, and we're down by one person.  In this case, it was a healer. But we had enough for Flex so we decided to go do Flex instead.  We did first wing and tried for a few achievement but unfortunately failed so it might be better another time when we have more people to sit around and cc stuff.

We were almost about to kill Spoils and Aza d/c'd and we were short on our side of the room.  It was so close though - right towards the END!! Unfortunately we ran out of time to do it, and had to call it.  I think next week, we might just do Wing 1 for Raked and then Wing 3 again.

I ended up asking Triarchi (the GM of Illidari Remnants) to fill in a spot.  I met him whilst I was considering trolling trade for a healer for Mondays - he was trolling trade chat tryign to recruit a DPS.  We were very similar at the time - 6/14 and when I chatted to him, he was friendly.  After a nice talk, and I found out he was the GM of Illidari Remnants and so I added him to friends so we could chat raid stuff, since we seemed to be quite close in terms of guild progress. 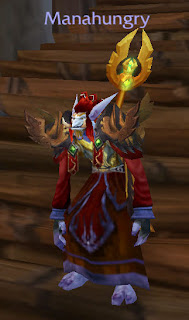 Off topic now, but that a few weeks ago, I was fighting Ordos and someone asked me if I was from Dath'remar.  It was a DK, whose name I didn't recognise.  I said yes, and he said he was from there before, and said I might remember him as Manahungry.  Of course I remember him!  He was one of the winners in the Rojak transmog competition we had on our server.  Manahungry was in Illidari Remnants - but his raiding toon is a hunter.  Alts, they're so confusing!

Anyway, back to what I was talking about.  So Triarchi came along as a filler (they raid Wed/Thurs/Sun) as a DPS since we dropped down to 9 for Spoils.  But, it was a shame we didn't get anywhere.  I felt a little guilty for dragging him along for 30 minutes of nothing.

Right before raid started, I was distracted because I saw someone in trade hocking a Gulp Froglet - he wanted 20 Magnificent hide for it.  I asked Lush if he had it, he said no.  I was going to go to the AH and buy some hide so I could get it, but I ended up getting distracted doing raid setups.  Little did I know that SABRE had heard me asking about it and went in and bought it!  Why that sneaky little bastard!

So I didn't realise until he brought it out for raid, and I was whinging about wanting to get that Froglet.

"You can't get it anymore," said Lush.
"Why?" I asked.
"Didn't you see Sabre saying he was going to get a pet before raid?  I think Sabre now has a Froglet."
I saw someone patting a Gulp Froglet.
"SABRE!" I yelled.  "DID YOU BUY THAT PET? You bastard, I was going to get that!"
I could almost hear him grinning.  Sabre said if he got another he would give it to me.  I wanted to have a pretend tantrum and say "No! I don't want your pity frog, I will get my own frog!" But I was laughing and cursing him at the same time so I couldn't bring myself to say it.
Luxy tried to console me by giving me her one but I refused to take it.  I was just in an I hate Gulp Froglet mood today because I'm sick of my repair bill from Gulp Frogs.

So Sabre went to bed early because he was Croaking Tired or some other lame frog joke... rubbing it in, what a cheeky little hunter... and I decided to go buy one from the AH instead after raid.  Ouch, well that's a lot of dailies I'll need to put back in to pay that back!  Now I don't ever have to kill any Gulp frogs, ever again.  And No Bufo!  Hey, did you know that NO BUFO is an anagram of BUFOON.  Well, Buffoon has 2 Fs, but the irony of it...