I always tease Sprowt of Sprowting Words about being a lazy blogger :)  She's pretty busy though - she is the guild leader of Dark Wolves, a mother of two children - I know how busy that can get!

My EU sub had run out for the last month, so I hadn't popped over to say hello to anyone for a while.  And the Isle is starting to bore me, so I would use any excuse to get out of doing dailies or farming for pets.

But, inspired by Starre's visit, I decided to go and look for her again.  I hadn't had much luck previously and the times she would be on, I would be at work, and the EU WoW is only on my home computer so I'm limited in the days that I can go over to see her.  However, I was really lucky - she was online but she was in Siege of Orgrimmar, and I thought I would just say a quick hello and wait it out for a while to see if she would be out.  However, she very rapidly finished and she left her LFR and came to see me in Orgrimmar. Little did I know that she had left her LFR to come say hi - it had been not going well.

I said that I'd hoped that she wasn't abandoning her guildies, and she said no, just her OH.  I thought she meant OffHand, but she actually meant Other Half and we had a good giggle about that. 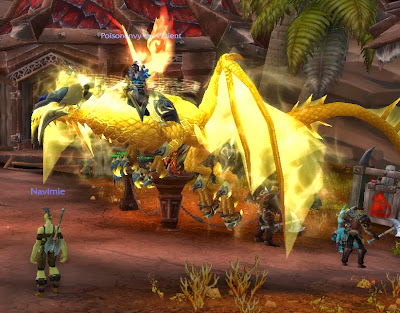 She made a grand entrance on a Heart of the Aspects mount, and then we started chatting about blogging, raiding, guildies, pets... 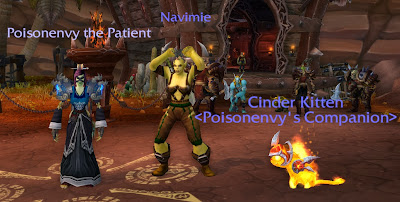 I might have nagged her about updating her blog... just a little. 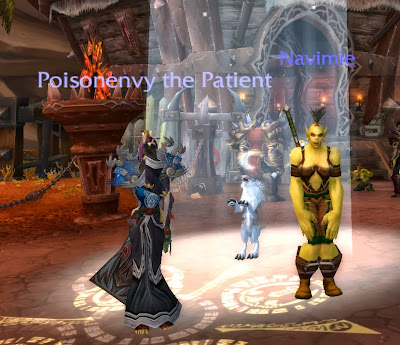 And we danced with her new pet!

I noticed that Sprowt wrote a little about my visit - but I was very impressed with her vegetables and all the activities she was up to!  This year is the first year I've tried growing stuff from seed, and it's been rather fun and the kids like to see growing things.  Thanks Sprowt for letting me visit and Navispam you!