These time differences are a killer!  With Daylight Savings, Arv is now another hour out and by the time he's finished doing work on Saturday night (his Saturday morning), Lush is fast fading and zombiefying. We had a few good goes the previous weekend as we tried to work out our silver strategy and we were pretty close - we had a bad wipe on the last boss and that stuffed us up!

So Saturday, we were determined to get this Shado-pan Monastery.  It was all serious biz!  We logged on, we weren't our usual silly selves, we were "Yep, let's do this!" and off we went to Shado-pan.

It was a relatively smooth run.  A few deaths but nothing you couldn't rez from.  Lush was on his monk DPSing and Arv was tanking with Luxy, Sev and myself rounding out the CMNs.

It was a bit unfair as it was Luxy, Arv and I who only needed Shadopan Monastery for our last silver - the other two still need a few, but I really wanted to get it finished with Arv because it wouldn't be hard to organise guild runs for challenge modes, but being able to play with Arv meant we only had one or two opportunities to do it.

I was panicking a bit during Taran Zhu because I hate being dragged from Orb to Orb and I was worried that while I was meditating to get rid of the Hate of Hatred someone would die.  But it went well!  And we had plenty of time to spare! 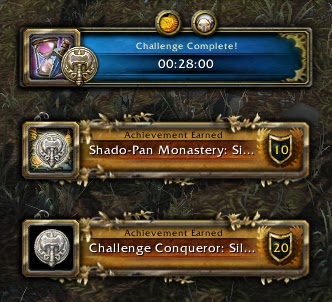 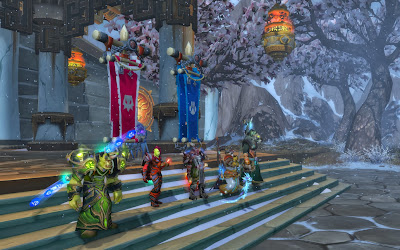 And with silvers, you get to choose one of four different colours.  I took emerald, Luxy and Arv took crimson.  Sev said he would get Ashen when he got his silvers!  It would be good to line them all up. 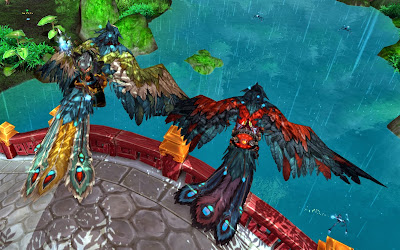 I don't know if these pictures do it justice.  It's a really nice looking mount!  Kyxyn said grats on another mount that is wasted on someone who will never use it LOL.  I guess I might take this one out to look at every now and then! 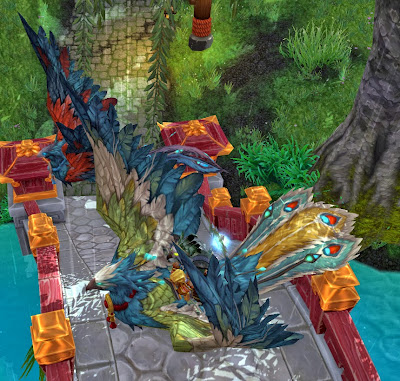 And yay for the guild achievement too!  Now we can start working on guildies and medals!  Man, the only rewards are from guild golds though... might take me ages before that happens (probably won't happen with me in a group!)