It was pretty exciting doing Flex for the first time, and boy did we have a MASSIVE turnout!  Guess how many we had???

Raked came!  I was happy to see him, but his mic wasn't working and his vent died halfway through the night as well.  He and Kyxyn tanked, and we had 6 healers (Navi, Lush, Lac, Tal, Priestietute and Asys' shaman), and we had a ton of DPS.  Aza, Sev, Moopie, Luxy,Yig, Voros, Nok, Hunterfaith, Souglyy (who had to leave because she was really tired), Arv (on Rasfari), Dahakha, Evea, Pol and 2 of Priestie's friends from Blackrock (one was a shaman, but I can't remember the other!).  I have this bad feeling that I'm missing one other person... but for the life of me, can't remember who!

Though I opened it for all guildies who were geared and enchanted with at least an ilvl of 480, it became apparent by the third boss that it probably wouldn't do.  The third boss is a DPS check and unfortunately, we couldn't make the cut.

However, the first two bosses went down, albeit somewhat messily - in fact, the first boss looked like it went down with only 10 people alive.  I can understand that for a lot of people, it would have been the first time they had seen it and it's hard to get the hang of the fight if you don't really know what's going on.  Here's a pic of everyone during the cutscene. 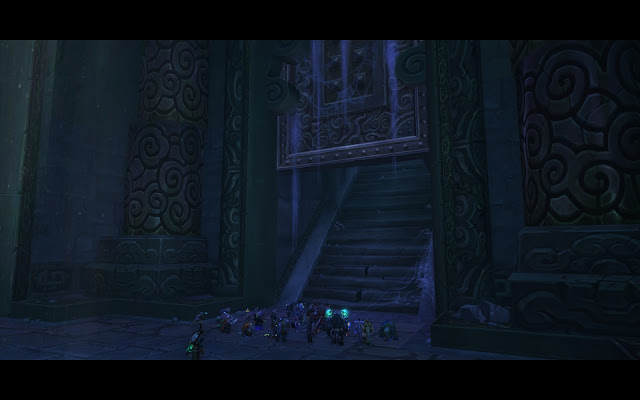 The second fight was also very hectic.  As the group was trying to bring the three down together, there was a slight miscalculation and the times were off, and they rezzed up with 20% health again.  Argh!  I was already OOM, but with so many healers, dispels were still a little off, but it didn't hurt as much as normal.  However, having seen the fight now on Flex, I have a better idea of how to do the proper fight.  Though, it will still hurt! 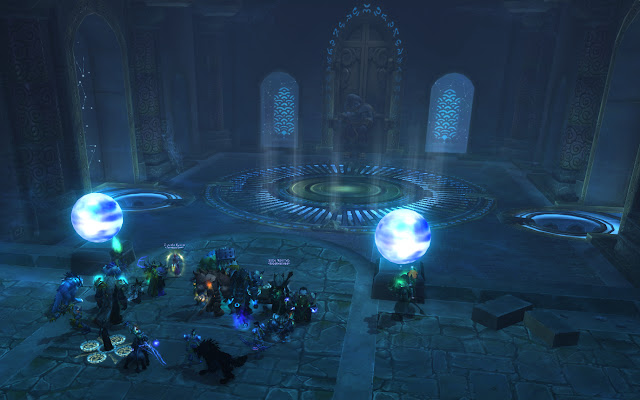 The third fight was a steep learning curve as I hadn't really read about it as I was still thinking about how to do the second fight.  However, once you get the hang of it, it's not so bad!  The inside bit as a healer is like proving grounds, so that was at least pretty easy.

For a first Flex as a guild, I hope everyone had fun.  Of course was frustrating by the 3rd fight, and I will have to do some fiddling next week with raids, but it was a good starter and I hope that it brought some feeling of community back into the guild for all our regular members.

And... I must have had my lucky dice because I got TWO loots yesterday! One from each boss!  Bracers and shoulders woot!
Email Post
Labels: flex Raiding siege of orgrimmar