Guildleader chores: Updating our raid looting system - should we go to EPGP?

Raid loot can sometimes be a real pain in the ass.  Watching people argue over loot causes grief - kinda like how money is the root of all evil - grief not just to me but to the parties involved.  In a perfect world, nobody would whinge about loot or who deserved what. 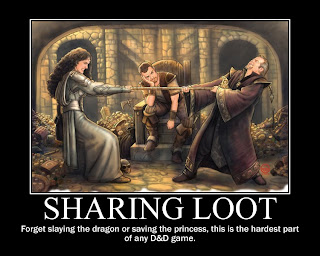 Our guild, being so old went to DKP a long time ago, and we still use it today.  It used to be Fue and Lush's job to keep the DKP updated and it's annoying having to try to remember who turned up, who got what, enter it in etc when I would really rather be catching up on my arenas or killing Warbringers.

Over time people have commented about why we should be using other methods like Loot Council or even just rolling because now that we're just in 10s, there aren't that many people to argue over loot against.  However, Loot Council has its own problems because even though you'd want it to be fair, there will always be the disgruntled person who thinks deserve something more than someone else and the person to point the finger at would be whoever distributed loot.

When I was on Eldre'thalas levelling my paladin (yes OMG I have an alt that is level 20!) guild chat would be full of EPGP stuff.  I didn't understand it but I knew it was something to do with loot.

It looks like a whole lot of mumbo jumbo to me.  It's an add-on - I went to go try to read about it but it was pretty confusing!  Luckily Matticus has a post on it with an interview by Valen who clarifieds a lot of it for us noobs who are simple minded.


Sometimes known for being somewhat “mathy,” EPGP tries to provide a fair, transparent, configurable, deterministic, and reasonable loot distribution system. The word “fair” is somewhat ambiguous when it comes to handling loot, and is highly subjective. Can loot systems be fair to every member of a guild, and to the guild itself? Probably not, but when people think about fair loot systems, often words like “unbiased” are used, with sentiments of objective, even distribution. EPGP provides such features.

I like fair. I like maths.  There dislike unfairness immensely and anything that is open and transparent is good so nobody feels like they're being shafted.


Many familiar loot systems, such as DKP and its variants, use a single point pool, whereas EPGP uses two. Those two kinds of points in EPGP are in the name — EP and GP. EP, which stands for Effort Points, encapsulates the contributions of a raider to the raid (primarily attendance). GP, which stands for Gear Points, encapsulates the loot a raider has received from the raid.

So that explains what EP and GP are, but not really what they MEAN.  I'm getting to that bit.


Dividing a raider’s EP by their GP determines a raider’s Priority. When a piece of loot drops, the player who is interested in it with the highest Priority gets the loot along with the Gear Points the loot is valued at — there is no randomness or rolling in EPGP. This therefore increases the player’s GP, which lowers their priority once the division takes place, putting them below many other players (depending, of course, on the other players’ EP and GP values).

Am I losing you yet?  So as you keep taking stuff, your GP increases, so EP divided by GP becomes smaller and smaller, putting you lower on the priority list.


Left unchecked, EP, which grows as raids are attended, and GP, which grows as loot is received, would increase unbounded since neither are reduced inherently in the loot process. Instead of spending points, both simply accumulate. To prevent infinite growth, EPGP uses the concept of decay — at the start of every raid, or every raid week, or any other interval, everyone’s EP and GP are reduced by a fixed percentage. This results in EP climbing quickly at first, but then eventually sloping off towards a natural cap. GP, on the other hand, tends towards zero as it accumulates only when loot is rewarded rather than every raid.

So that is a clever part of it.  You can't just hoard it forever.  It tapers off - kind of like how your conquest caps taper off if you don't keep playing to keep your points up, even if your rating for ratedBG or arena is very high.  I like this concept, but it's a little confusing.  So how much does each item cost in terms of GP?


By default, every piece of loot has a fixed cost across all guilds and servers, based on the slot it is used in and the item’s level (aka, ilvl). Deep inside the game, there are formulas used to determine how much of a each stat such as Haste Rating or Intelligence a piece of gear has; this formula is based on the ilvl and slot, so, for instance, an ilvl 359 two handed sword has more strength than an ilvl 359 one handed sword or ilvl 359 ring. EPGP uses this formulation to derive a price for each piece of loot, normalizing around a chest piece with an arbitrary cost of 1,000 GP. Weapons cost more than 1,000 GP since they have a bigger impact than a new chest, whereas rings, carrying smaller item budget, cost less.

Like how iLvL is calculated as different items weigh differently with stats.  That's cool.  Because someone might take a ring and neck and someone else gets two pieces of tier and yet they get a huge upgrade for the same cost of DKP as the smaller stuff.  I think that's good.  Here's an example of value of items from WoWWiki.

EP is more fluid; typically guilds award EP based on attendance, both who is present at the beginning of raid and who is present throughout its duration. Even players on the bench receive EP and thereby loot opportunities when next they are in raid.

That's important to me.  I need to reward people who sat out to make sure we don't get dropouts from being denied a raid spot.  And also for the volunteers too.  So how does it look in action?  Velen used his guild as an example.


- 15 minutes before raid starts, a decay of 7% occurs- on time bonus of 1250 EP awarded to each member of raid- every 15 minutes therafter until end of raid, 300 EP is awarded to anyone in the raid and on standby- at end of raid, another 1250 EP bonus is awarded- some guilds opt to award EP when bosses die- small fixed weekly amount of EP for consumables donated to raid

To keep track of all this there is an addon - EPGP addon - which puts all the EPGP stuff in game rather than externally like we do on the website.

There are heaps of other advantages - with our current system, if we killed a boss who was hard work and no loot was taken we don't get any DKP for that, which is crap.  With EPGP we will still accumulate points anyway.  One of the disadvantages with EPGP is that new raiders will become equal to long standing raiders quickly because of the decay.

Why has this suddenly come up?  Well, it came up because Asys said a funny comment the other day.  We were talking about ... something, I can't remember what ... and I mentioned that our guild is very old.  As in, we had been a guild with core officers since Vanilla.  2004 or 2005?  Anyway, he said he could tell because when he did our first raid and we mentioned DKP, he thought, wow who uses dkp anymore?

Anyway, it's something to think about.  And will have to discuss with the other officers.  And we'll lose all our officer notes I hear, if we use the addon for EPGP!  I will miss officer notes :P