As I went to Throne of Thunder last night to do the LAST raid we would do on Dath'remar, I wished we could go out with a bang.  But, that was unlikely as we still aren't top of our game with Sev still learning the ropes, but we're going to get there again, eventually!

The raid mood was not glum, but there were some undercurrents of excitement knowing that we would be moving servers shortly.  We got Magaera down at least!  Rosh managed to roll his daggers and we even had some thunderforged axe drop for Moo on Tortos.  After raid, Lush was going to transfer the guild and I had a whole heap of packing to do.  Or rather, tidying up. 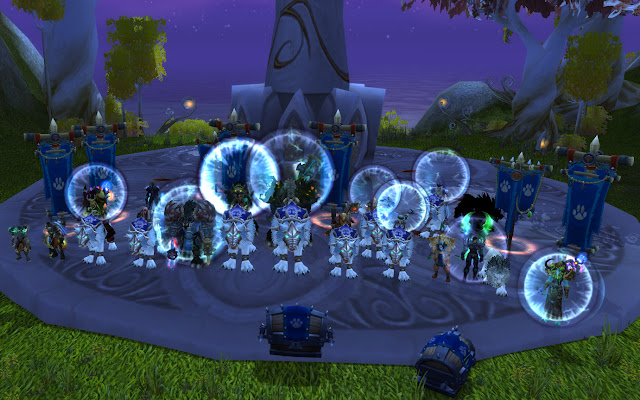 We all went to take a picture with the Dath'remar Blood Elf monument as our farewell to our server.  And what was funny, was that a Saurfang level 4 BE was questing and saw us and photobombed us. 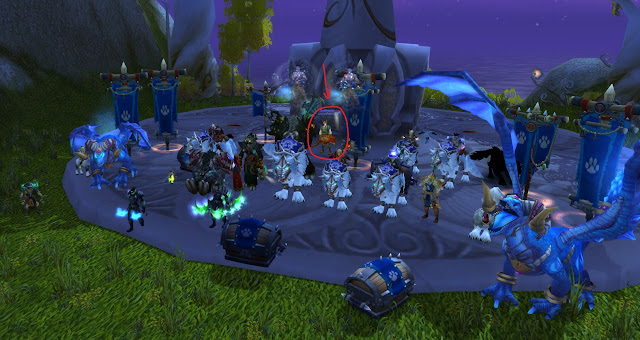 It would have been our guild's fifth birthday on the 29th June - 5 years since we moved as a guild from Khadgar.  Last year I wrote a post about our Guild community and I highlighted things about our guild which has made my guild more like a clubhouse than a workplace. 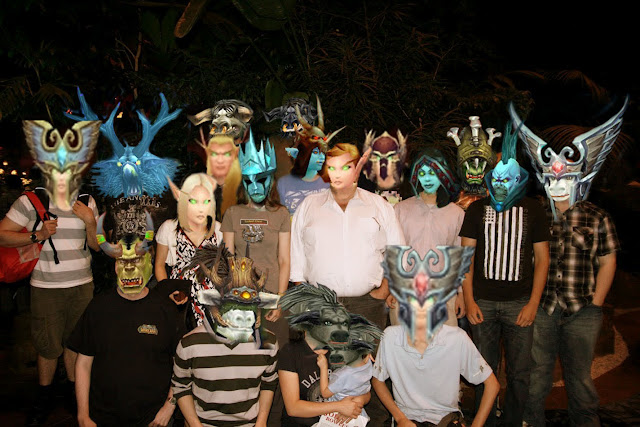 Lately we've gotten a whole heap of great social members (a lot of people I've met through blogging) who have made the guild really lively again.  It's so nice to have them all here!

In all honesty, I couldn't be bothered cramming my bags full of stuff for the move.  I figured at some stage I will transfer the guild banks with all my crap in them... I dunno, I'll have to think about that because it means I would have to actually LEVEL my toons so I can transfer them - YUCK!

I DE'd a few useless things... but it turned out to be a waste of time since there was only ONE thing I wanted to add to my already bulging bags, which was my Formal Dangui.  I even left the red and green ones behind. I even left behind all those BOA weapons!  And all my heirlooms - I  mean, what does one who does not level need heirlooms for anyway?

So, just when I thought I'd fixed up all my bags, I realised, I need to empty my mailbox.  Oh Geez.  Aza forced me to take a picture of it... 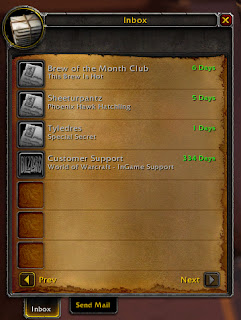 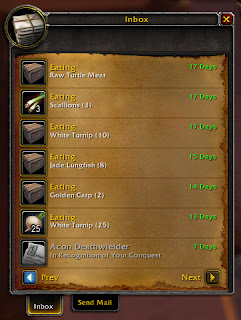 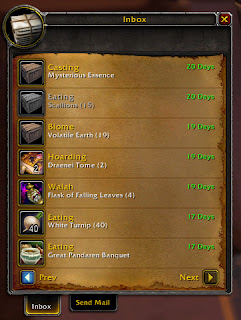 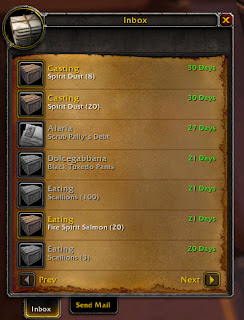 So I stuffed my enchant mats and 20k gold into the guild bank and I was just about ready to go... but oops I forgot to leave my arena teams!

Sev and Shab had an awesome run in 2s and finished wiht a rating 1750+.  They had some awesome games on the weekend - one game where Shab was left after Sev died and the one of the opponents died, leaving Shab versus a destro lock and he managed to kill him.  Shab was particularly pleased with that effort.  It feels sad leaving it all behind - but we can PvP on our new server anyway!  I left all my teams and finally, I looked like I was ready to leave.

I stood around in Org, looking around, seeing how quiet it was.  The mail appeared in my mailbox, telling me how to follow my guild, and I said goodbye to a few Dath'remarians and I logged out to follow the instructions for transfer.  I almost forget to delete my Navimie nameholder from Saurfang, but once that was done, the whole transfer process was quick - I logged on an hour later and was there on Saurfang.  I was a bit slow to initiate my transfer - Luxy even made this on twitter to hurry me along... 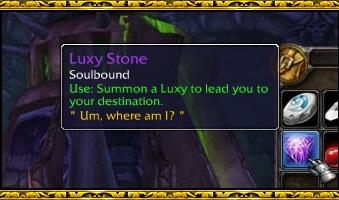 Lush got online and he promoted me to Guild Master and then I set to work making mischief.  I redid all the ranks to reflect Wolf Pack ranks - I had a few complaints.  But I like them!


One thing - the Barrens is HEAPS busier on Saurfang!  Cities are populated!  We picked up a new tank - Asys, friend of Nerisella - and grabbed all the guys levelling their new toons here because they didnt' want to transfer and our guild is looking busy.  Even Saundin faction changed his paladin - GASP!! A few more people to come across, and we'll see how raids go tomorrow.  Who's excited??  ME!

OH and look at the lovely banner that Ancient made for me as a moving gift!  I love it!