Pet talk: The Longest Day is over

When Patch 5.3 hit yesterday,all I wanted to do was collect pets.  But, it was a raid night and that comes first, so I logged on but no second tank meant that we couldn't raid.  Oh well :P


So I went to check out some of these new scenarios and polished them up and grabbed a few new achieves - more on that later in the week.  Heroic Scenarios are not TOO terrible - kinda like a heroic dungeon I suppose, in terms of difficulty at my current gear level - but I can't talk, because I died only once in the scenario, whereas my two companions died A LOT.  Probably because of  my bad tanking.  But do you NEED a tank in a scenario?  I was just tanking because that always helps me live longer and do some damage too.


Luxy was sad because she hadn't managed to nab any pets and so we took her on scenario breaks and warbringer breaks.  But she ended up with 2 new pets from friends so that at least cheered her up.


Now, I was supposed to be talking about The Longest Day achievement. Luxy said she did hers yesterday (it took her 7 hours but she was killing rares as she went), and when I told Ratshag I was trying it he told me he had heard it was buggy (and I had the buggy bit too - I didn't get the marked battlestone that's the reward for that achievement).  I was a little forewarned when I read that the Fable pets had gotten a bit harder.

One cool thing that's new with the Blizz standard is that all tamers are now marked on the map!  Pet dailies reset at 9pm. So I started mine late at night (umm.. midnight)  and figured I would pull a late night, and see how much I could do.  I spent 2.5 hours doing Kalimdor and Northrend, but I was a little distracted with trying to upgrade a couple of my commons and greens to blues as I flew around.

Work was easy today with really LOOOONG cases, so I had the opportunity to do my pet battles while at work.  Pandaria turned out to be the most time consuming.  I finished Pandaria about midday and that probably took about 3 hours.

Dos-Ryga was HARD.  Those damn heals!  But I was decided to switch to double darkness (dark whelpling and Lil' Deathwing) with a bat instead of single darkness with a moth and my anubisath idol and that seemed to go better for me.  Nitin was harder too, but I used my amethyst spider, kun-lai runt and flayer hatchling and it went down after only a few goes.  I'm not sure why on the last go Nitin didn't eat the dead pets I had, but maybe because they died so quick it was still on cooldown.  Nitin eating healed for a LOT, so my only suggestion is hit hard and die fast LOL.

Outland was quick, about 45 minutes, tops, with upgrade distractions.  I noticed that there are a few NEW rubbish things to get in bags!

I also got a pet leash, which you normally can buy from vendors as a vanity pet frill.


All up it took me about 6 hours, with distractions and work.  So it could probably be done in 5 hours.  I'm not sure it would be much faster if you were a mage - I did the circuit of Northrend, used the portal to go to Orgrimmar and did Kalimdor, used the portals in Org to go to Deepholm, Twilight Highlands and then Uldum, and hearthed from Uldum back to Pandaria.  If I wanted to do it quicker, I would have done Uldum in my Kalimdor Circuit, then gone Deepholm, Twilight Highlands then go the Dark Portal from Orgrimmar to do Lydia in Deadwind pass before going to Outland and then hearthing back to Pandaria to finish all those ones.  I was surprised there weren't more - I would have thought there were a lot of bi-faction Master Tamersin Eastern Kingdoms that could have been included in the Longest Day.

I got 2 new pets, as gifts!  Tyledres gave me a Tainted Waveling, and Cymre gave me Lil' Bad Wolf! 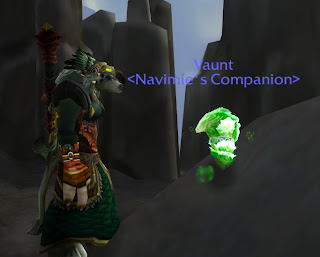 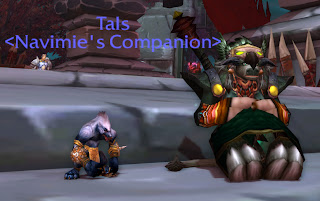 I spent a fair bit of time flying aimlessly around Northrend looking for an Unborn Val'kyr.  I noticed there were TomTom Way points on Wowhead, but I didn't use them, but Luxy encouraged me to do it so I put them on.  I don't understand this Val'kyr.  Mumper said that it had no specific spawn points and it does randomly spawn, but it seems like it randomly spawns in only certain parts of Northrend.  And the conditions... I think it's just random!  I've added it to NPCScan to see if that helps!  My other pet fanatic friends Luxy, Yuuna and Cym all have one, so fingers crossed I'll find one soon!