I saw Wreck-it Ralph at the movies with the kids. And I LOVED IT. The kids loved it. And the funny thing about it, is that so many things in the movie could be about Challenge Modes.

Challenge modes are a race to do a dungeon as fast as you can.  Your gear is scaled down to ilvl 463 but you get to keep all your haste/exp/hit caps from your current gear which is useful as you probably couldn't hit those with 463 gear.  There is no loot that drops (you can't even open boxes or sacks that you have in your bags from outside because there is NO LOOTING in the instance).  I have wanted to try challenge modes but you really have to have the right attitude to want to do it, you can't just pick up any old person.  I used to think it was the zone of the heroic raiders only, and not really for us non heroic raiders.  You have to be:
So just like in Vanellope and Ralph, you gotta find someone with the same goals/ideals as you!


Oh and you know they're timed, getting silvers in all the challenge modes (finishing them all in 25 minutes) gets you a cool mount!

Ok wait, that's Vanellope's cool mount in the movie.  Well, cool to some.  It does look rather delicious!  Here's a pic of the Challenger mode mounts from when I visited Apotheosis.

Oh, and if you win gold, you get to wear pretty clothes!  Just like Princess Vanellope!  Don't you think she looks like a cupcake? :D  OMG oops, sorry for the spoilers peeps!

The gold challenge armour for druids is the Cycle set and it looks pretty damn sweet!  It doesn't quite look like a cupcake but it does look rather swish.

My interest was peaked in Challenge modes again after reading Beru's post at Falling Leaves and Wings about Why You Should do Challenge Modes.  And she said this:


In short, Challenge Modes require you to become a better player and learn more about your class.

I was intrigued.  Beru said that I would learn my limits and push myself to the max, and do it in a group.  Hopefully, that's a like minded group!  However, how to find someone who is like minded?  Who wants to put in the hard yards, late nights, early mornings, or whatever it takes!

None of our guild tanks are particularly into time wasting in wiping in dungeons for personal achievements for no loot and not much valour.  Moo said he would tank for me, but I know what he's like with achievements, and his patience with strangers isn't really the most forgiving, and he can't do late nights (peak time is sucked up by raiding, PvP, LFR, dailies... where is there time for anything else).  I only had one reliable tank I could ask that I knew would have some reliable cross over with me, and that was Arvash.  The time of crossover is very late at night for me, and earlyish for him.  And he's an achievement nut, he'd like to do that stuff.

Luxy was also very keen to do challenge modes.  So between the two of us, we convinced Arv to come tank (actually, it wasn't that hard.  It was more like "Hey, come and tank some Challenge modes?  I'll heal and Luxy can lust and dps!"  And he pretty much said ok!) and we tried to find DPS for our runs.  I knew Roshii and Souglyy would love to come, so I asked them first if they would like to come.  However, I forgot to mention the times of day we would be doing them.

So, Saturday night 11pm was the time we decided upon.  However, Arv was up really early - because Mrs Arv was out of town, so he could get on early and not get in trouble for playing WoW all day!  That, and he also had work to do, so he was half afk doing stuff, and he wouldn't be done for a while.  He couldn't focus to tank a raid or a challenge mode, but he was ok to half ass DPS an LFR with me and Lush.

Luxy got a bit excited and told Rosh and Souglyy to come, but Arv wasn't finished with work, and by the time he was done, it was their bedtime (it was coming onto 2330).  So we had to find 2 other people who were happy to guinea pig with us, and I dragged Lushnek and Luxy dragged Karnmageddon to fill our group.

"Scarlet Halls is the easiest," said Karnm.  And so we tried to go do that.  Small hiccup though.

"Uh oh, I haven't done this on heroic on this toon... OMG I'm so sorry!  I can't enter challenge mode!" wailed Luxygaga.

So that was that.  We had to go to Scarlet Monastery instead.

We didn't start off well.  We wiped on the first trash group!  That was because Starfall pulled mobs from everywhere and we were overwhelmed.  Ouch.

So we reset it and started again.  We made it to the boss, didn't wipe, but then the first group of trash in the corridor wiped us another 5 or 6 times.  It was... humiliating to say the least!


By the time we figured out our CCs and line of sight and set our targets (and figured out that we are NOT pulling them outside LOL) we'd wasted a fair bit of time on it.  We had a few more wipe pulls and then we got to the next boss which was easy.  Then into the cathedral we went and you can't do that back corner pull like you do on a normal heroic, the whole room comes!  So we did it the normal way, and I was worried about mana but we managed to get it and we finished our first Challenge mode!  Now, I didn't know that you get an achievement just for doing the challenge mode, I thought you only get an achievement if you got a medal.  It took us an hour - OK NO LAUGHING, it was our first time!  I'm sure our subsequent efforts will be better :)

The next day, we planned to do Jade Temple.  Karn had been there before so all his tips were really helpful. This one was different - no cc happening here.  The first boss was different - we all had to run in together or we died from some sort of ranged attack, and the adds had to be kited out to be killed, or the splashy water stuff they left on the ground when they died would be really painful for us.  We died running in the first time.  The next time we stuffed up was when we hit the courtyard and then wiped and came back in all different directions when we rezzed, and the NPCs had dragged off some of the sha we needed to kill to get the boss to spawn. 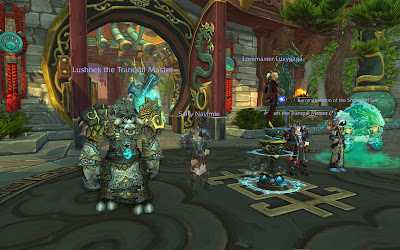 The Sha at the end was slightly more challenging, but I managed to make it through with enough mana.  We got our first medal! 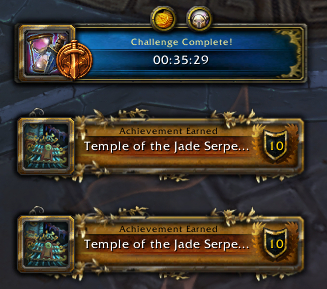 At the end of it, though I wasn't really pushed to my limits as a healer because we were still in the learning phase, I thought back to what Beru said.

Anyone who is looking to expand what they thought they knew about their class will find that they still had things to learn though the process of completing challenge modes. And that is the beauty of them. They really make you understand every aspect of your role. Every random talent has potential benefits. Every outside of the box solution has potential.

I didn't really find that in my challenge modes.  Perhaps it's because I also PvP with my druid, and that also pushes my skills to the limits, from escaping traps and burning cooldowns to avoid dying and saving my teammates, as well as cc'ing.  But I've only done a couple of challenge modes so far.  Perhaps if I ever reach a silver or gold, I might have to revisit this statement.  So I'll end this post with something I thought about druid healing, pre 5.2, which fit in very nicely with the Bad-Anon motto in Wreck-it Ralph, when druids were somewhere near the bottom of desirable classes of healers behind pallies, shamans and disc priests....