I love fables! And with the new Fabled Pets added in 5.2, they were just begging for a story. So Mataoka and I decided to make up our own book of fables to talk about these amazing creatures we battle for our gorgeous little pandas. It's a series that may take a few weeks, but once we're done we can put it into one big post!  This is the fourth post in the series.

Of all the creatures created by the gods, none were more sneaky and mischievous than the Tanuki.  While the fox was said to be the master of deception, the Tanuki were blessed with an expression of sweet innocence that belied the mischief they had been involved in.

For their crimes and incorrigible behaviour, the gods placed a mask on the tanuki, showing them to be the bandits they really were.  And of all the masked Tanuki, the most wicked of them was Nitun. 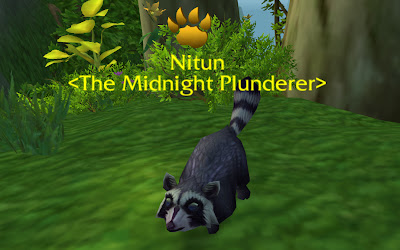 Nitun was a master thief and a master of disguise.  He was blessed with the cutest face and softest fur, but he had sharp teeth that could gnaw through a deer's leg.  But what he liked most of all, was to eat little pandaren children.  Every parent would lock their doors in fear, for at midnight, was when Nitun would appear and whisk his victim away.

In a small village, there lived a woodcutter and his wife and they had a little girl, named Ka-Mi.  Ka-Mi had a pet rabbit, named Koto, and they were very close.  Koto would snuggle up in bed with Ka-Mi and they would play hide-and-seek around the village all day long.  One dark moonless night, Nitun came to their house, disguised himself as the girl's mother, tricked the little girl and stole her away into the forest.

Ka-Mi's parents were devastated.  No child taken by Nitun had ever been found, and they mourned their loss, and the whole village mourned with them.  Koto, however, vowed revenge, and, taking a flint and tinder, a bowl and a rope, set off into the forest to find Nitun.

Tanuki live deep in the forest, but there is always a ready source of water nearby.  There was only one small  lake in the woods near the village, fed by a waterfall from the mountains, and Koto hid in the bushes by the lake, to wait for Nitun to appear.

At dusk, Nitun appeared with his bucket to draw water for his supper.  Koto could hear him singing:


Oh what a feast we'll have tonight
So fine it makes me sing!
Such tender meat, when cooked just right
I'll have me some crackling!

Koto bristled with anger, and followed Nitun back to his lair.  He saw Ka-Mi in a little cage, her mouth gagged and her hands bound, her tear-stained face and red rimmed eyes causing Koto's heart to tighten in his chest.  He had to do something.  But what?

Nitun was preparing the wood for the fire, and muttered to himself, "Onions, onions, where are the onions? Oh, this will not do!  I will have to go out and find some!"  Nitun slunk out of the cave, and Koto rushed in, and taking the bowl from his pack, scooped out some water from the bucket that Nitun had carried back and poured it all over the wood stacked by the fireplace, as well as all the wood stacked for the fire for cooking.

When Nitun returned with the onions, he went to light the fire and found all the kindling and wood was wet.

"Oh bother!" said Nitun, crossly.  "Now I will have to get some more."  He picked up his rope and set off into the forest to find some firewood.  There was a clearing not far ahead which often had a fair supply of dry stick and twigs.  Koto decided that this was the moment he had been waiting for.

Whilst Nitun was picking up dry sticks, Koto walked non-chalantly into the clearing from the opposite direction.  "Hello neighbour!" called Koto amiably as he went to pick up some firewood for himself.  "How are you this fine evening?"

Nitun nodded at the rabbit.  "It's suppertime, and I have found myself out of wood, so here I am."

"Oh, I found a lovely patch of sweet berries, earlier," said Koto, pulling out a handful of berries and popping them into his mouth.  "Would you like to share?  Perhaps we can eat together?"

Nitun's mouth watered and his eyes lit up.  Berries were one of his favourite foods.  "Why, that sounds splendid!  I am planning to have some sweet crackling for dinner this evening - I would be happy to share for some of your berries."

Koto swallowed the bile that threatened to rise, but forced a shining smile.  "That sounds marvellous!  Would you like some help with that firewood?"

"Thank you," said Nitun, beaming at the rabbit.  "Many hands make the work light."

They gathered wood until they had amassed a huge pile.  It was quite heavy and too hard to haul.  Koto made a show of trying to haul the wood, but collapsing exhausted from the strain.

"I am not as strong as you, friend tanuki," said Koto, panting for emphasis.  "How I wish I was as strong as you to be able to bite through a stout branch or carry a load of firewood!"

Nitun's chest puffed with pride, for all tanuki love praise and admiration.  "Yes, well, I'll have you know that I can carry this whole pile on my back!  If you could just help me tie it?"

"But of course!" said Koto, and he climbed upon a rock to help tie the sticks in place.  Koto tied them with triple knots to ensure that they did not come loose.  Unbeknownst to Nitun, Koto had also tied the rope from his belongings to the makeshift backpack.  When the pack was secure, and Koto was sure that Nitun could not untie the knots, he used his flint and tinder and set the pack alight.

"Aiyeee!" howled Nitun, and he ran towards the lake and threw himself in to extinguish the flames.  Koto tied the free end of his rope to a heavy rock, and with all his might, threw it into the lake, weighing Nitun down, and Koto raced back to the cave, and rescued Ka-Mi, and took her home to her parents who wept with joy and showered Koto with praise and the rabbit became quite the hero in his village.

What happened to Nitun?  Some say he drowned in that lake.  Others say that he changed into a fish to escape the tight ropes, and some other say he gnawed through the rope and set himself free.  But after that night, Nitun never terrorised the villages in that area, ever again.

So children, remember to lock your doors at night and be good, for if you are naughty, Nitun might steal you away and eat you!  And keep a pet rabbit, for good luck.

So concludes our series!  I hope you enjoyed the Pandaren fables as told by Mataoka, Navimie and Kallixta!
Email Post
Labels: fiction Pandaren Book of Fables shared topic