I love fables! And with the new Fabled Pets added in 5.2, they were just begging for a story.  So Mataoka and I decided to make up our own book of fables to talk about these amazing creatures we battle for our gorgeous little pandas.  It's a series that may take a few weeks, but once we're done we can put it into one big post! 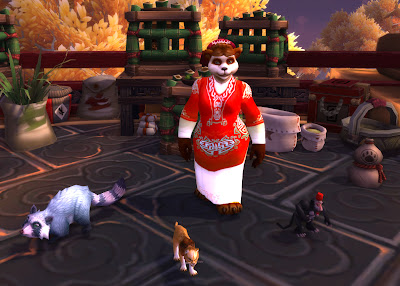 
Lucky Yi and the Plainshawks


A long time ago, in the rich and fertile lowlands of Pandaria, lived a cricket named Yi. Food was plentiful, and there was enough for all. Bandicoons would dig around for roots and vegetables with the quillrats. Crickets and grasshoppers would sup on the grasses and grains, and turtles and otters would eat the fish and the river grasses in clear fresh waters that flowed from the mountains. At night Yi would play music on his wings with his back legs, and all around him would know that everything was peaceful, for if you heard a cricket sing, it meant there was no danger.

One day, a new creature came to the lands of plenty, one that was found far to the north of Pandaria. It was a yakrat, and they usually lived in the grassy plains of the far north. A pair of yakrats had wandered into the valley, but it wasn’t long before the pair became ten and then ten became sixty. Within a month, groups of yakrats were seen devouring the fruits and grains, and within two months, an army of yakrats had devoured more than half the food of the valley, and even more were being born every day. In the north, their population was kept in check by snakes and other predators, but here in the valley, there were no natural predators living around the rivers and fields.

The fields became barren, and the waters began to foul from the refuse that the yakrats left in their wake. Yi stood atop his tall grassy stem, and looked sadly out at the destruction. The otters were leaving, heading to the south, and many families of quillrats had already left, heading to the east as the rats pushed them out of their homes. He sighed and decided to head north, towards the mountains.

At the top of the mountains, he saw many huge birds, hawks by the dozens, the hundreds. And he was afraid. A hungry hawk would like to eat a juicy cricket as a meal. As he crept quietly beneath the dense bushes, he heard someone crying. He peeked up, and nearby was a baby hawk, who had fallen from its nest. It appeared unhurt, but there were no parents nearby, and it was too young to fly. It looked like it had only just hatched.

Yi eyed it warily, for the beak of even a baby bird was enough to cause him injury, though he was an exceptionally large cricket, for the years of plenty had caused him to grow to an enormous size. He was a head taller and no doubt heavier than this tiny chick. The chick blinked at him, and began to cry again.

Yi’s heart went out to the poor creature, and so he began to play his cricket song for it. The chirrups were new to the little chick, and it stared at him in wonder, all crying forgotten, as it listened, enraptured by the cricket’s melody.

A piercing cry interrupted his song, and a female plainshawk descended upon Yi, and he leapt away from her snatching claws. The chick began to cry again, but the mother bird gently lifted it back up to the nest. However, the crying did not stop, and the mother was at her wits end.

In the bushes below, the cricket melody began again, and the baby bird stopped its wailing, and closed its eyes and fell asleep. The mother plainshawk saw this, and realised her error, and she flew down to the ground, and bowed towards the bushes.

“Cricket, I have wronged you. I realise now you merely soothed my chick with your song, and for that I am grateful. I would be honoured if you would remain here with me, and keep my chick company and soothe it while I am hunting.”

Yi came cautiously out from the bushes, eyeing the beak and claws of the plainshawk nervously. “I will remain here, plainshawk, if you wish. I have no home to go to, for it has been overrun with rats.”

The plainshawk’s eyes lit up. “Rats, you say? They are a fine feast! Where, praytell, can this feast be found?”

Yi gestured towards the lowlands of the valley below him. “A plague of rats, plenty for you to feast, and all your friends! Amongst us valley dwellers are no beasts which can stop them, but you may be the force that turns the tide!”

The plainshawk let out a shrill shriek, and launched herself into the air. “Never fear, cricket, for the kindness you have done to me, so shall I repay it to you. I will take my family, my friends to hunt these rats. But in return, I would ask that you and your kind live here, in the mountains, and sing to our chicks, to keep them calm while we are away.”

“Agreed, and my thanks, great hawk,” said Yi. And he began his song again.

Great groups of plainshawks flew across the valley, devouring and scattering the rats, and they grew fat from their hunting and feasting on the plump engorged rodents. Hawks came from the south, the east and the west, as word spread of the feast before them. Before long, the Valley was cleansed of the rat plague, and the fertile fields began to recover.

“How lucky am I!” said Yi, as he visited his old home, “Through one small act of kindness, I gained a powerful friend, and saved my home.”

The otters spoke of the lucky cricket Yi, who saved their homes and cleared out the invaders. The quillrats returned and sang his praises, and the bandicoons spread the words to their neighbours. The cricket Yi became known as Lucky Yi, and you can recognise him for his enormous size and beautiful song.

To this day, there are no rats or mice in the Valley, now named the Valley of the Four Winds, in honour of the hawks that came from the four corners of Pandaria to help rid the Valley of the rat plague. Plainshawks still patrol the valley, to ensure that the rats do not return, and the song of Lucky Yi can still be heard at night, letting all know that everything is at peace.