I love fables! And with the new Fabled Pets added in 5.2, they were just begging for a story. So Mataoka and I decided to make up our own book of fables to talk about these amazing creatures we battle for our gorgeous little pandas. It's a series that may take a few weeks, but once we're done we can put it into one big post!  This is the third post in the series.


There were many fish that liked to test their limits, but none were more bold than Dos-Ryga, the big green carp.

From when she was a little fish, she was told that fish could not go out of water.

"You'll die," said the Emperor salmon.  "The only time we can leave the water is if we're jumping out of the water to catch flies or insects to eat."

"Then why," asked Dos-Ryga, "Do we not die when we jump out of the water?"

"Because," said the Krasarang Paddlefish, "The air is only poisonous to us in large amounts.  We can take small amounts, small doses."

It sounded very silly to Dos-Ryga.  Why was the air poisonous to fish but not to other creatures of the land?

"Don't you know ANYTHING?" said the Jewel Danio haughtily.  "Fish can't SWIM on land.  You can't even move!"

Dos-Ryga couldn't believe that if she went on land she would be immobile like a stone. She wanted to see for herself.  One day she decided to test a theory and flipped herself out of the water onto some rocks, well hidden from predators by low lying branches.  As she lay there, she found it harder and harder to breathe, and when she couldn't stand the suffocating feeling anymore, she slipped back into the water, and gasped as the water flooded her gills, and she breathed easily once more.  She could move on land, just not very well.  It wasn't swimming but she wasn't immobile.

I wonder, thought Dos-Ryga, if I practice, perhaps I will be able to spend more time out of water?

Every day Dos-Ryga would jump out of the water as much as she could.  She would do flips, and spins, jumping as high as she could, trying to stay in the air as long as possible.  She would throw herself out onto sandbanks and then flip herself back in again.  Little did she know, that all of this exercise would make her strong, stronger than any of the other fish.

One day, a bear came to the lake, and saw all the fish in the lake and thought what a wonderful plentiful food source he had found!  The fish were terrified, but not Dos-Ryga.  How dare he come to her home!

When the bear came to fish, he spied the shiny scales of Dos-Ryga.  "Aha!  There's my first meal!" said the bear, and swiped the water with his big paws, trying to catch Dos-Ryga.

Dos-Ryga jumped out of the water, spinning, and dancing, deftly avoiding all of the bear's attempts to catch her.  She even leapt at the bear's face and landed a resounding slap with her tail.  She splashed water in his face, and she even managed to throw in a few more painful humiliating whacks with her rear end.  The bear was enraged and tried for hours to try to catch her, to teach this fish a lesson, but Dos-Ryga had more practice and more stamina at jumping and flipping in the water, and soon the bear became tired and frustrated, and he left, hungry, and decided to try and find an easier meal.  He told the other bears of the strange fish of that lake, who were so strong that they could fight you for hours, and you could never, ever catch them.

Now, in every body of water in Pandaria, there lives a Water spirit.  Water spirits are mischievous things but their job is to protect their home.  The Water spirit who lived in Dos-Ryga's lake saw what Dos-Ryga had done to protect the lake and her friends, and rewarded her with a spirit bubble, the same bubble that water spirits used to glide out and about.  Dos-Ryga was thrilled - the bubble would encase her and allow her to float above land, and be able to breathe.  Dos-Ryga took her new gift and travelled far and wide across Pandaria, exploring, and was the only fish to ever do so. 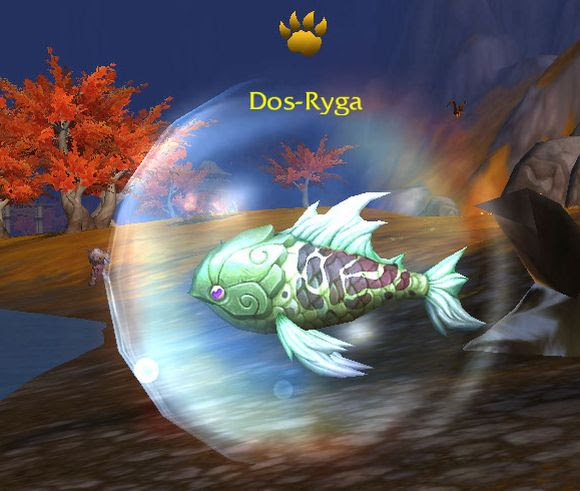 So you see, little ones, if you practice hard and exercise every day, you too can be like Dos-Ryga, so strong that she could beat a bear, who was much larger than herself.  If you ever see Dos-Ryga and challenge her to a sparring match, be prepared to lose for she can outlast you!