I love fables! And with the new Fabled Pets added in 5.2, they were just begging for a story. So Mataoka and I decided to make up our own book of fables to talk about these amazing creatures we battle for our gorgeous little pandas. It's a series that may take a few weeks, but once we're done we can put it into one big post!  This is the second post in the series.


The Mushan has been prized for its strength, and its placid nature.  But it was not always this way.  This is the story of the wild angry Mushan, Darkhide.

Once, before the Pandaren came, the Mushan were the largest beasts of the land.  They were too large to be attacked unless they were old and frail, or young and vulnerable, and they wandered in packs, looking after each other, eating the plentiful grasses and roots and leaves.

Then the Pandaren came.  They found they could harness the strength of these beasts as beasts of burden, to help with their fields and pull their carts.  They found that these Mushan were also strong enough to bear their  heavy weight, and the mushan became part of a farming household.  Even the meat of the mushan was tasty, and ribs were prized by Pandaren chefs.  Delicacies such as mushan tongue were even highly desirable edibles in some circles.

However, there was one dark skinned mushan, who was untamable.  This Mushan would not only charge those who approached but was vicious and chase and trample and maim those who ran from its path.  The Pandaren gave this mushan a wide berth, and named it Darkhide, for its dark skin and dark temper.

Every now and then, hunters would test their mettle against Darkhide, and walked away the loser, if they walked away at all.  Darkhide was a spawn of the Sha, it was said, evil and cruel.

Then one day, cunning Ling-hai the Curious came.  Ling-hai had the gift of seeing into the true heart, and she could tell if the Sha had invaded a soul.  She tracked down Darkhide, and watched helplessly as she saw Darkhide chase down a hapless farmer who had wandered too close looking for his lost chickens.  The farmer lived, with a broken leg and several nasty gashes before he managed to get to safety.  Ling-hai spied a massive thick trunked tree, and crept over to it, and decided to observe Darkhide from the safety of its branches.

When she had secured her perch, she yelled loudly to attract Darkhide's attention.  The crazed mushan charged over to the tree, bellowing and stamping its feet, the ground shaking ominously as its great hooves thundered on the ground.  Darkhide swung its head at the tree, but the trunk was thick and the roots strong, and though a great many leaves fell as Darkhide rammed again and again, the tree did not fall, and Ling-hai did not budge.  Darkhide raised its head and roared in frustration, and Ling-hai was able to hold its gaze for a second.  And she was surprised, for she saw no darkness within, no evil.  Why then, she wondered, was Darkhide this way?

After many hours, Darkhide grew tired of bellowing and trying to shake Ling-hai from the tree.  As darkness fell, Darkhide wandered away, to a copse of trees, a good distance away from the plains that it usually plagued.  Ling-hai climbed down from the tree and moved stealthily towards Darkhide, who seemed occupied with something.  As she neared, she saw a mushan calf, with similar colouring as Darkhide.  And now Ling-hai understood why Darkhide behaved so evilly. 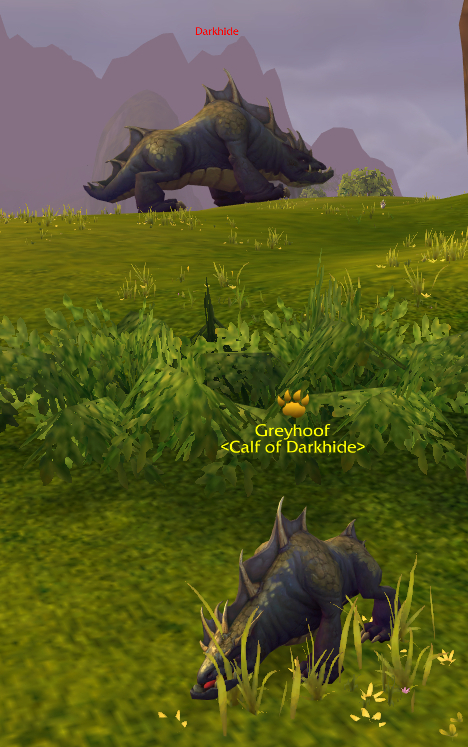 Darkhide was a mother, with a calf.  A calf that, like Darkhide, was different to all the other mushan of the valley.  Ling-hai nicknamed the calf Greyhoof, for it was grey with yellow speckles, like it's mother, the exact opposite of all the yellow mushan and their grey spots who lived in the valley.  She wondered, if this calf had a similar temperament to its mother.

Ling-hai told the farmers of her discovery, and in the Pandaren way, they left Darkhide alone, for the mushan matriarch was not unlike them - fighting to protect home, and family.

So remember, young ones, things are not always what they seem.  Evil has many faces, but if you look and accept with an open heart, you will see that some things that were once thought evil because they were different, are actually not evil at all.